Puzzle & box for a friend

My friend Sarah’s husband is in the military, and every year or so, he signs up for a temporary deployment for 3 - 6 months…Sarah takes a few weeks of vacation to visit him during this time, and they explore different parts of the country or world, depending on where he goes…Well, he signed up for 3 months in Savannah, starting in March, but with the pandemic, he’s confined to barracks when he’s not on duty, and Sarah cannot visit… She told me last week that he had ordered war figures to paint in the evenings, and also wanted a puzzle…

I had been wanting to try the online jigsaw puzzle generator, so looked up his unit insignia and made a blue acrylic puzzle (after 200+ earsavers, that was the only acrylic I had large enough for a 7x7 puzzle). Weeding it was a joy, of course, and I regretted not having removed the masking from the top. 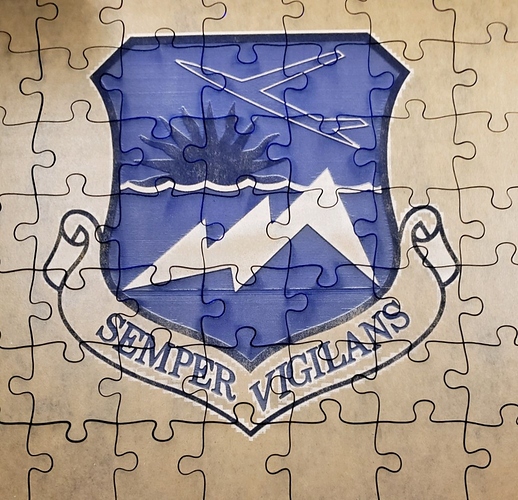 Once it was done, I realized I did not have a box that it would fit in well, but I did have some scraps of proofgrade cherry, so used that to make a box… 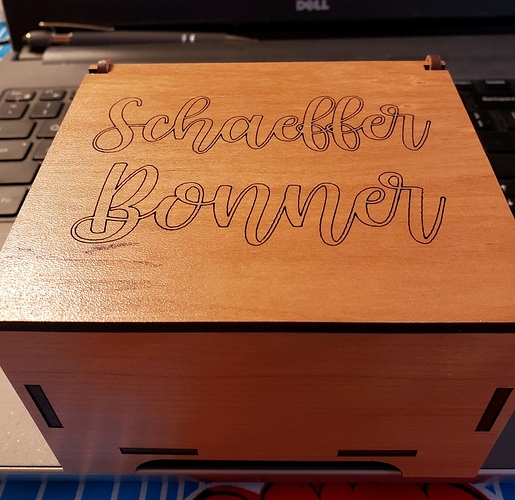 I was pleased with how both came out, and took them over to Sarah’s house yesterday–we had a masks-on, socially distant chat, and she’ll be including the puzzle in the care package she sends her husband this week…I hope it relieves some of his boredom…

This is a really thoughtful gift!

How did you get the (not blue) colors? I’ve been staring at it trying to figure out if you printed on the masking or painted on the acrylic or something else entirely.

That’s the masking, and the lighter exposed blue is where it was etched. I didn’t take a photo once the masking was off (I’m not a puzzle person and didn’t want to have to figure out where to put the 18 pieces that didn’t have image on them!), but it came out all tone on tone blue…

Ah. That all makes more sense.

Good work on puzzle and box.

Puzzles are saving the sanity of many right now. An awesome gift, and love you made a box as well.