Question regarding paths and expanded paths in Illustrator

So I’ve spent about 50 hours on a project to lasercut. Created the forms in Fusion, and exported them as DXF as I always do to Illustrator for final design. ( Engraves, etc )

When I was done, the exported SVG was giving me errors about inkscape bla blabla when opening it just in Chrome. When exported into Glowforge App, all the shapes were black, and said “No Artwork”. Through trial and error, and recalling a similar issue I had once, I expanded all the paths I drew in illustrator. That fixed the issue. However, when I cut on the Glowforge, it is double cutting everything. Most likely due to the fact that now instead of just one path, it’s a stroke and has two lines. Like in this picture. 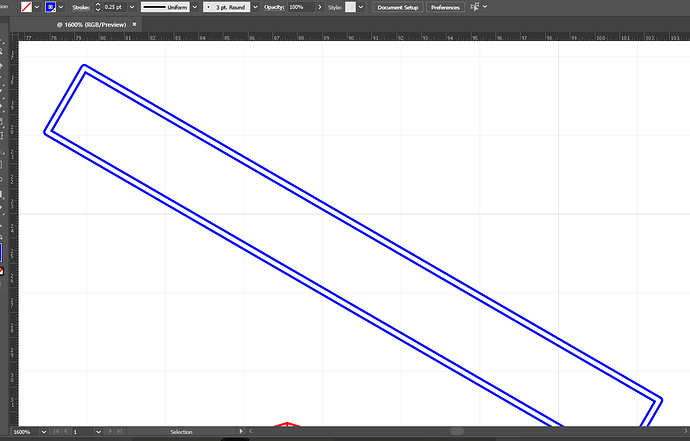 My question is, how do I correct this now?
Thanks!

I’m not Chris but I do have an idea. Can you go back to the original file before the Expand (which does convert a stroked line to two outlines) and do a Flatten Transparency instead? I’ve found that fixes some odd things, maybe it will help.

Expand is mostly used for live effects/appearances and text.

Say, I have a circle with a black stroke and no fill. Expand is going to make a compound path of the stroke that consists of a fill. Like a donut.

I think it’s going to be very tough to go back and fix from the “after expanding” point of view. I hope you have something available before that decision to expand all of the paths. If you go release the compound paths, you’re going to basically have 2 filled shapes inside of each other, but they are going to match what was the inside and outside of your stroked path - not that center… so they will not be the original size.

In Illustrator, zoom way in, Ungroup, and delete one of the lines.

(It did happen when you Expanded the stroke.)

I think that will change the size of the finished object. The expand process makes a compound path. For a rectangle, it will make a compound path consisting of 2 filled rectangles and the compound path “hides” the interior portion of the square, giving it no fill. Where the size difference comes from is that it’s making one rectangle to match the outside of the stroke and one to match the inside of the stroke, leaving the original path outline in the middle of the “gutter”.

Yep, if you expand an empty stroke, you get two cutlines placed, one on the inside of the line, and one on the outside, exactly the width of the original stroke apart. And deleting one is going to slightly change the shape.

Here’s a trick though that I’ve used… If you set the stroke width to be equal to the kerf, then expand it and delete one of the lines, you have just kerf-adjusted your shape. (You’d delete either the inside line for exteriors of the shape, or the outside line for holes in the shape.)

You can make it work in your favor and wind up with exactly what you want.

Under normal conditions, if the stroke size wasn’t excessive, I’d just delete the inside line - half a pixel is probably pretty close to a good kerf adjustment at 96dpi.

@willcfc if you were designing with 2 or 3 pixels wide stroke size, you might want to go back and rework it.

This is what I ended up doing. Thanks Jules

For the closest approximation of your original line, you would delete one of the paths, then use the “Offset Path” command on the other, set to half the width of your original stroke. (Use a positive value if you kept the inner path, or a negative value for the outer path.)

Thanks guys! Really appreciate all your expert feedback!

I got everything all set! Though I’m not sure exactly what was causing my original issue. I suspect it was something from the web I downloaded to use as part of my design.

Hey, that’s a great idea! Bummed that I didn’t think of it.

Here’s a trick though that I’ve used… If you set the stroke width to be equal to the kerf, then expand it and delete one of the lines, you have just kerf-adjusted your shape.

I do this all the time. Although instead of deleting the interior lines, I use pathfinder-join to just merge the inner with the outer (goes faster).

Also, my favorite trick: to make a boarder around vector art that follows its outline, do the same thing, but make a copy of it and use a huge stroke width (like 1/4").