I am about to receive a new PRO. I’ve had 4 other GFs (not pros) and in those I removed the internal fan (not an easy process) to make the inline fan more efficient. Is there any trick on how to remove the fan on a pro? I Believe there’s a big heat sink in front of the fan. I haven’t done any of these mods prior to the warranty running out.

I’ve done the basic, but looking at the pro I just gave up and left in there. With new design grill it seems to be less of an issue.

What I have done is run the fan cleaning routine, and very gently put a household 1/2 paint brush into the fan to clean - but since I can’t see I’m not sure how much good that has done.

Thanks @sqw. I will leave it for now and see how it goes. I ran a plus with the fan (turned off) in it for about a year until it was nearly entirely clogged.

remove the fan on a pro

Easy way once warranty is not an issue is to nip off the backside of the grill, disassemble and unplug the fan from the back.
There will still be an outer ring left from the fan but nothing inside the hole, so clear sailing.
I have left the fan but removed the grill. If the fan ever balks I will just disassemble it.

Mine is left in. as it can spin freely with air movement the build up is no worse than the rest of the path and when I am cutting something extra smoky I turn it on and get a lot less crud build up inside the machine as it does not hang around there as long to build up.

This question is outside our team’s scope. I’ve moved it to Beyond the Manual so the discussion can continue there.

You’d just need to remove the entire cooling system to get at it. Not impossible but it’s a drag. @MyDogsThinkImCrazy, got opinions?

Ya, I have opinions.

So I just finished a big repair project on a pro and removed most of the items on the left side to redo cables and such. 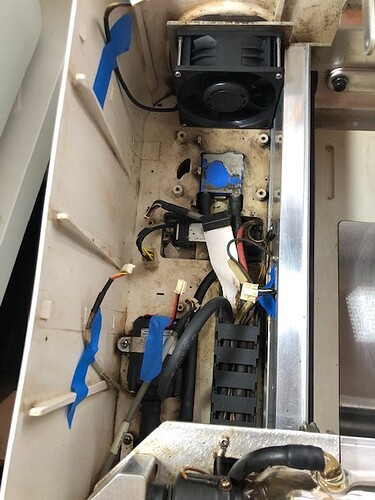 The heat sync is really not too hard to get out. Some notes on it:

Also, It’s illegal to void a product’s warranty simply because it receives an “unauthorized” repair. So doing mods like this do not actually legally void warranty as long as you can prove that the repair made did not cause or create any factor into an issue the machine eventually might have and you need your warranty for. Although who wants to deal with court over that all and the task of proving that you did not cause any future issue is really a difficult one.

IMO, the heat sink is the easiest part to remove on a pro when it comes to the assembly on the left side and as long as you research into what you are doing then I think, go for it.

Also, I am assuming you are putting the heat sink back in the machine after you do the fan, correct?

You got a thermal paste brand you like? It’s one of those things I always feel like I should have on hand but never get around to ordering.

What I always wondered is if it would be beneficial to remove all the electronics and move them to a separate box instead of exposing them to all the crud floating in the smoke during its life. I am not sure why this was not done in the first place or at least isolate them in the same rig.

this was not done in the first place

Yeah I’ve often wondered why the heat sink wasn’t in the air intake instead of exhaust. Seems like that entire system could have been moved to the right side which is far less junky.

Maybe it’s a matter of physical space in the machine? Maybe it’s easier to assemble if there’s more room for components.

Is Arctic Silver still the “gold” standard for this? (Serious question, not just slipping in linguistic cleverness.) 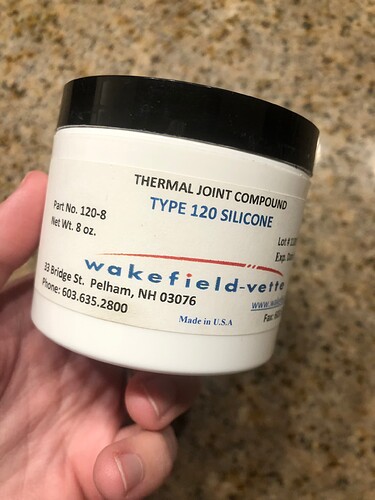 This is what I used and I like it