Removing the paper backing from Proofgrade

Hey all! Thinking about making some production runs of little gaming tokens and whatnot, and my wife and I realized the labor involved with removing paper backing (such as proof grade acrylic) will add a fair amount of labor time.

I feel like there must be a way to reduce the time spent on this tedious step. Does anyone have a tried-and-tested technique for loosening the adhesive so the backing basically falls off. We tried soaking acrylic in some warm water for a while, and while it did help it wasn’t all that much easier. I also tried using warm water in an ultrasonic cleaner, which was just as good as soaking for 5 minutes. That said, it’s still not falling off on its own.

My next step is to try out some different cleaning chemicals in the ultrasonic, like glass cleaner, Simple Green or even something serious like Goo Gone. I don’t think that’ll bother the acrylic, but I would test it first.

Before I get into all that testing, though, I figured I’d ask you fine folks. Have you found something that works?

Gorilla (Duct) tape works perfect on all the PG woods. I haven’t delved into acrylic yet, but I would think it may work similarly. It’s certainly worth a shot if you haven’t tried yet!

Just stick it on, press it, then peel it off and it takes the masking with it, especially the little tiny bits.

For acrylic, I would just remove the front masking. Leave the back on so that it doesn’t scratch on the honeycomb etc and just peel off the backside when they are ready to be packaged.

If you’re engraving a mirror image from the backside, just do the opposite. Leave the untouched side masking on and towards the bed so it doesn’t scratch.

So you just stick the tape on and peel it off?

Yeah, I’m talking about getting them ready to package. I’ve seen other companies ship stuff with the masking still on and I feel like that’s not a great experience for the consumer.

Some people have mentioned balling it up and then pressing and pulling over and over again over the surface–I hadn’t tried that yet, just putting a strip over then pulling it off, and it works wonders on the wood PG materials.

I’ll give that a shot. I suspect it would work great for little fiddly bits, but not as well for larger flat areas…

With non proofgrade material I often use a sacrificial layer of cardstock to reduce flashback. Try removing the protection first and use this technique… For acrylic, it’s normal to remove the protection from the top side before cutting and scoring.

Sorry - should have been more clear. I would engrave and cut without the masking on so you don’t need even need to weed it from the engraved side. Leave the masking attached to the backside. It will be just one solid circle of masking to remove.

Oh! That thought hadn’t even occurred to me. Thanks for that!

I found during two runs of 1000 tokens that pulling the mask saved many hours. I soaked 15 pieces of the proofgrade maple in a measuring cup of alcohol for about 3 minutes and the smoke stain wiped right off with a rag.
No raised grain in the veneer and no swelling.

That’s great to know for later. I’m really looking at acrylic right now. I suppose the alcohol wouldn’t bother that material, but I wonder if it would take the adhesive off at all.

Alcohol does cut the adhesive.

Yes, alcohol does help with weeding. 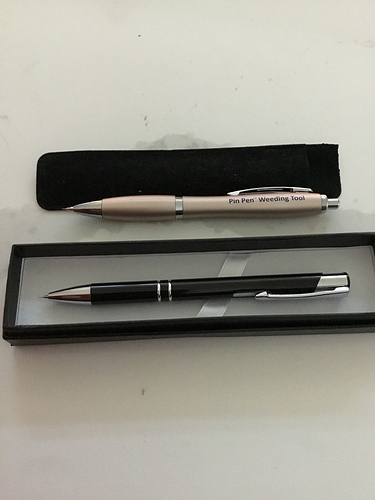 For all the tedious weeding bits, I use these pens regularly. They are incredibly sharp. I use them for picking up the corners on larger pieces also. You can find them by goggle. Just watch for the shipping charges. I use them for all material from veneer, acrylic and wood. I have no affiliation. I recommend buying two!

Also, I didn’t think initially the sharp point would be strong, but so far so good.

Yes, alcohol does help with weeding.

70% Isopropanol? I’ve been wanting to try it but afraid it would remove the PG finish.

90 some percent, I think the less water the better. Since the engrave and cuts open the material to absorption water is the last choice for cleaning. I haven’t seen any degradation of the finish.
I have also noticed that cleaning immediately after the operation, the easier the stain comes off. If left overnight it seems to harden, and is more difficult to remove.