My son is on his high school’s rocketry team and as these things go, occasionally his team experiences some sort of catastrophic failure that requires the construction of a new rocket. Unfortunately for his team, this failure occurred over the weekend and they needed to get in a few more flights but did not have access to their guillotine-style fin jig.

Dad to the rescue with Fusion 360, an add-on that exports to SVG, and the Glowforge. The results are not perfect (I’ve since improved the design), but the basis is the same. 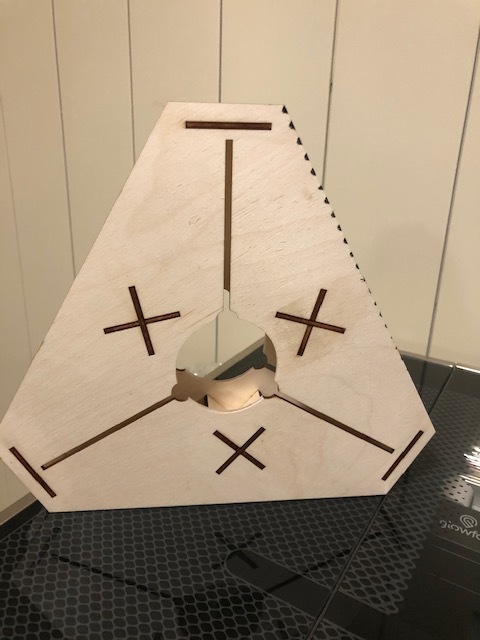 This was the prototype, but they went with it and were able to get the rocket rebuilt to fly again that weekend.

I did model rockets as a kid. My High School athletic field was a few 100 acres bordering a river wetland. Perfect for model rockets. Probably launched 100s. I built lots of really fancy rocket models, festooned with all sorts of aerodynamic geegaws. Multi-stage, parachute recovery, glider, and combined gliders that separated from the rocket at apogee. Every few launches would result in a loss of the rocket, typically because the parachute wouldn’t eject. So by the time I quit the hobby, I’d optimized the whole process to achieve maximum performance with the minimum of cost and effort. I’d just glue some small fins and a straw on to a rocket motor and launch it. Maximum speed, maximum altitude, and you never had to worry about recovering the rocket since it was just the engine and 10 cents worth of balsa.