As it gets closer to “THE EMAIL” I am wondering if anyone has come up with a rotary attachment for the GF?
With the availability of the $75 Chinese 1000 mw engraver and a $45 rotary attachment, the GF becomes less attractive for a pen turner.
I could use some words of incouragement about now.

Well, there is this:

Pre-Release | Manual Rotary Indexer Made on a Glowforge

Supplies: 1 1/4" (19.05mm) Dowel, Acrylic & Cardboard - Op Time : 29 mins I had this idea kicking around for a while. I had a couple hours today so I tried it out. After about 30 mins in F360 I had this. [image] Exported out the parts I need to AI. Then started to cut. First with the acrylic. [image] [image] (The ring was going to be used act as manual indicator on how much to index the dowl. But that didn’t work out as planned. I have another idea- But I wanted to press forward) Next…

And I’m pretty sure he is working on a mechanized version.

I have a design for a rotary engraver I’ll be releasing once I get my pro and confirm it works on newer models.

I thought about making something but there are too many constraints. First is the bed depth. It would be limited to such a small diameter that it’s not appealing to me. Next is lack of software integration. The GF API is closed. Hardware integration may be possible by sniffing the gantry position but you’d still have to get the GF to sweep the X on a fixed Y. This is all too hacky to me and I can see my perfectionist OCD getting super frustrated with the integration. Ideally you’d want the software to send g-code to move the rotary. The more I thought about it, the more I wanted to get a cheap Chinese laser and make my own controller and software.

This is definitely one of the drawbacks in the GF design. It’s a closed consumer device that it not well positioned (nor is it meant to be) for hacking. Part of me thinks this is a mistake on their part. If the device was more open they could have spawned a community of people expanding the functionality much more rapidly than their own dev team could do. Especially on the software side which looks to be a bottleneck right now.

@Dan has pointed out the firmware will be GPL at some point so maybe there is some hope down the road. The good news is I think all of the hard work is done. The software, suppliers, logistics, and manufacturing being solved really positions them it quickly iterate on the original design. If they wanted to add a deeper bed with Z and rotary in the 2.0 version there is minimal hardware involved. It’s mostly case design and software. It’s just a shame the 1.0 case didn’t have a detachable bottom so accessories could be bolded on in the future.

To avoid the need to stop the Y motion perhaps one could attach the device to the gantry so it moves with it.

I think an anchored string coiled around the cylindrical object would turn it at the correct rate as it unwinds due to the gantry moving.

So perhaps it could be purely mechanical and need no software support.

This is what I am presently doing with the 1000mw laser and the rotary adapter. It takes about 20 minutes per pen.

This is the rotary adapter. 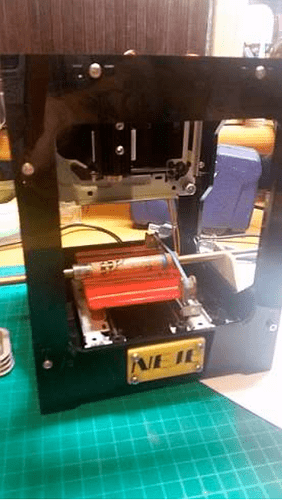 Something I hope will be a feature of Glowforge 2!

For anyone willing to index manually, you can just cut a rectangle out of a piece of plywood and set a cylindrical object in the channel. You could even just use a straight edge of any thick enough material (eg. cardboard) - put the cylinder against the straight edge, place a chock on the other side of the cylinder… Boom - free and easy and crappy manually-indexable rotary fixture. Prolly want to tape the fixture down, on account of the absence of stops in the machine.

To be honest, if turning pens is what you want, and you have a working solution with this Chinese unit, the Glowforge probably isn’t for you. No rotary attachment is promised, or even planned for the GF.
Ask for your refund, and that will move everyone else behind you in line 1 step further to getting theirs.

If that’s all you will ever use it for, a refund may be best, but with it’s capability I would be surprised if you did nothing more than pens in the machine. You may find it rewarding to explore the new possibilities - not being restricted.

For anyone willing to index manually, you can just cut a rectangle out of a piece of plywood and set a cylindrical object in the channel.

Have you made any progress with designing a rotary attachment?

Interested in this if anything ever became of it.