ColorShop wood is approximately like Medium Proofgrade, but with color finishes. It comes masked, and the label advises that one side is preferred for engraving. The engraving side has a less heavy finish than the reverse, which actually feels slippery.

The sample I tried tonight cut well with the Medium Maple Plywood setting, Speed 170/Full Power. There may be a way to improve this–you can see a faint lightening of the color around the cut edge.

Here’s an engrave test on the “Plum” color. To get you started, I found that Speed 925, Power 60, 270 LPI made a nice mark that wasn’t too deep or too dark. If I engraved without masking detail got blown out fast but I didn’t spend too much time on that. 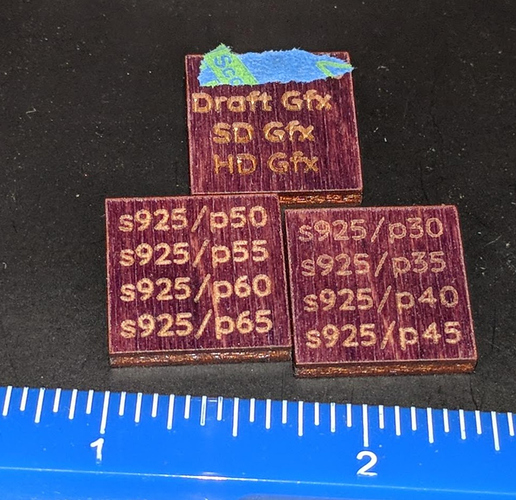 (I couldn’t find a way to erase the color layer and leave the wood underneath un-darkened–the samples are like that, and now I wonder if they were made with a rotary tool.)

At about $15 per 12" x 24" sheet, this stuff isn’t cheap, but it appears comparable to Proofgrade, and comes in new colors.

I got mine from Johnson Plastics, and the shipping charge came to about an extra $1 per sheet, which I thought was pretty good.

Tomorrow night I am cutting samples from all the colors I ordered and I will post an update with those pics.

I got a few small sample squares of this stuff in the mail a week or two ago and I’ve been meaning to give them a try. It seems like nice stuff.

I have used several colors as replacement for Proofgrade plywood. I like the colors, but the cut edges show the plywood layers a bit more than I would like. I originally bought these items from TheWoodGallery (https://thewoodgallery.com) but now they refer to Johnson Plastics.

Thanks for sharing your engrave test results.

I have some of this on my wish list (to replace the PG I can’t add… ahem) and I have a couple of samples I’ve also been meaning to try. I agree that it’s pricey and @smcgathyfay mentioned coloring her own wood, so I’ve been wanting to try that as well.

Rowmark ColorShop Woods Everything Else

[04] Using craft paint mixed with pearlized createx which is translucent. Apply with a sponge applicator, sand smooth then coat with a few coats of clear polyurethane. Next mask with paper tape, then cut away…

Here are color swatches. On each color I engraved with 2 settings. One was a copy of PG Maple “HD Graphics,” which makes a dark color. The other was 925/60/270 which made the lightest mark I could while still getting a nice consistent engrave.

Overall I thought that engrave contrast was poor until you used the very lightest colors like “Wheat” (natural color really), Clementine, and Sunflower. No way you would want to try any kind of subtle engrave on the middle-dark colors like Plum, it would just get lost.

I think these will be great for doing inlays with though.

Thanks for sharing the samples and engrave results. This will really save time for lots of us.

They used to be $7 a sheet for 12x24". Really sucked when I quoted supplies out then came back a month later to check and the did the big shift and doubled the price! Can’t be too mad, because it is a very nice product! (Plus I had ordered a lot of overage for a job so have a nice stash left ;p)

It used to be HALF PRICE?! I wish I never heard that.

There is one thing that kinda sucks about this stuff though… While it cuts well for me I have also noticed a couple of small knots that did NOT cut. Like any non-PG plywood, you better be sure you have a good cut before you lift the material and mess up your registration… Which is hard for me when I am making magnets that stick to the honeycomb!

I wanted to figure out how to do a jigsaw fit with this material. If you cut out a piece and want so plug that hole, the I found that the replacement part should be .0075" or .0080" bigger all around. Any more than that, and it gets too tight to assemble easily.

In Illustrator, that is easy to do with the Offset Path command, just be sure you delete the unwanted inner path before you cut anything.

But that’s not the interesting part. When I was looking at these little pieces I noticed that the color was very different depending on how you had the grain rotated. Some of the colors would get a whole lot darker. On others, it was more subtle. This yellow stain makes the effect pretty obvious.

Maybe every wood guy knows this, but it was new to me 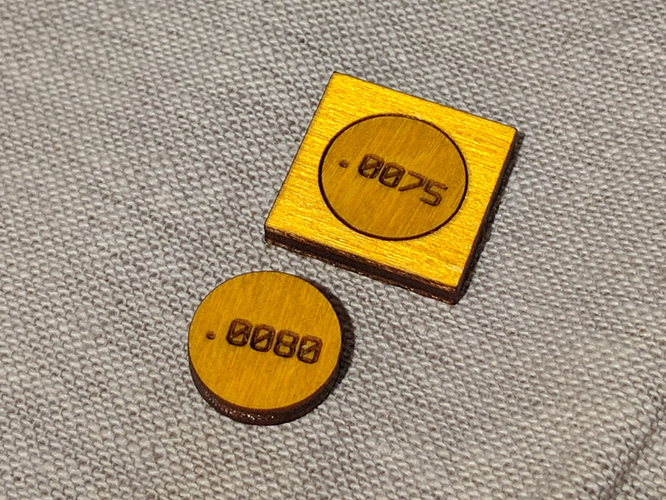 The colors change really obviously as your the item moves around. It is pretty cool, but also kind of irritating if you want just ONE color. I guess that is why we have acrylic, though.

I didn’t notice the color variation before. Rowmark’s instructions to “engrave this side” is also a little different. It implies a difference in product performance based on which side is up.

That is a nifty insetting test you have there. I’ll have to remember that for future projects!

I didn’t notice the color variation before. Rowmark’s instructions to “engrave this side” is also a little different. It implies a difference in product performance based on which side is up.

I haven’t tried engraving on the “wrong” side yet but it definitely feels different to the touch–much more slippery. Once I cut some larger pieces I will be able to see if there is a difference in the sheen.

That is a nifty insetting test you have there. I’ll have to remember that for future projects!

I have found this to be a pretty quick way to figure out the right inset expansion. A less lazy test would have used a shape with smaller details… I should make such a file, and, like, keep it around instead of doing this from scratch every time!

Last night I made a simple sign with “Dove tail” letters inset in a “Cardinal” placard. The picture does not do it justice–the red color is nicely saturated and deep, and the wood grain in the light color is really appealing. It just looks super sharp in person. 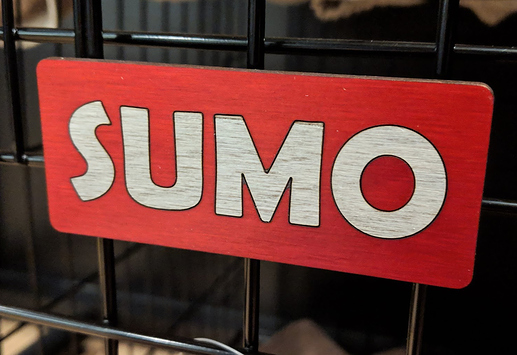 The .0075" expansion for the inset pieces worked fine but if I was making a piece that would be handled a lot I would try to make the tighter .008" fit work for extra insurance… or use a little bit of glue.

8 Likes
Calling kerf compensation wizards: working with multiple cuts in contact with one another?
pho February 27, 2019, 5:34am #16

@GrooveStranger. Thank you so much for this!!! I’ve been wanting to experiment with some transparent dye until I discovered the Rowmark Colorshop series. I just got my order in today and my first test turned out great using the Medium Maple Plywood setting. Its also a two sided engrave and for my needs both sides worked out well. I’m still interested in experimenting with dyes and acrylics, but this Colorshop series will be a time saver!

I have also found a number of knots in my pieces. Been meaning to try the flashlight trick to see if there are more.

Yeah, every sheet I have used has 1-2 knots under cut lines, so eventually I run in to one. Usually manually re-cutting once or twice does it but I have had a couple of pieces that ran over really, really tough knots and required some care to rescue.

I have been meaning to contact Rowmark and see if this is expected, or if there may be a coupon in my future.

Yikes! I’ll let you know if I run into any!