Calling kerf compensation wizards: working with multiple cuts in contact with one another?

I was designing some stuff with colored plywood and realized that the multi-color inset I had in mind won’t work without some extra steps that I am not sure how to accomplish.

Let me try to summarize the problem in pictures…

Here’s what works: any shape that is completely surrounded by one other material can receive one kerf compensation value for its perimeter. When you assemble the pieces, every un-compensated cut is mated to a compensated cut. By adjusting one value, .008" in this example, you can create a snug fit and a nice piece.

Here’s the problem: if you are trying to assemble piece that is not entirely enclosed by one other piece, the simple “cut the inset a little bigger” trick means that you may have some parts touching which have double kerf compensation. 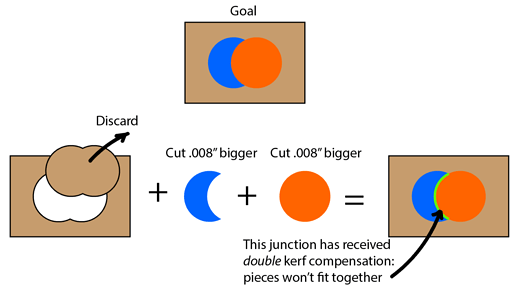 If all I cared about was circles as in the example I could find a way to isolate the green path on just the blue or orange shape and not add .008" to it. But if I am working with complex shapes that overlap, I don’t know how to proceed. I need a smarter, programmatic way to do the necessary path offsets.

Does anyone have any ideas on how to handle this?

In Illustrator terms, I guess I am looking for a way to do an Outline Stroke on a portion of an object, but that portion also needs to be selected in some clever way. Doing it manually would be untenable with complex shapes.

I think it confuses the issue to think about it as cutting .008" bigger…your pattern is bigger because you’re compensating for material lost to the laser, which means you’re cutting the part exactly to the size it needs to be. So I don’t think your pieces actually have double kerf compensation as a result. Each one is just as big as it needs to be to fit into the space you cut it for.

However you want to think about it, the point remains that the parts won’t fit where the green path is if you add compensation to the entire outline of both colored pieces.

It should work if you just follow the kerf adjustment rules from the writeups:

Make a copy of the two originally sized pieces and join them together or combine them in a compound path.

Have you tried it? I think they will. Because the kerf compensation is double the width of the laser path, which means each side of each figure gets half of it, and when you put the two pieces together, you’re therefore getting one full kerf width where they meet, which is exactly what you want.

You can replace your shapes up above with squares, and it will work just the same.

This is bringing back memories of an argument I had with my dad over how to weigh fish. He was right. You weigh a bucket of water, then drop in the fish and weigh it again, and the difference is the weight of the fish. I went through all kinds of theoretical mathematical calculations and got myself all confused and couldn’t make it work in my head. He caught some fish and put them in a bucket and weighed them.

Don’t think about it too hard. Just do it and see.

I haven’t tried it because it didn’t pencil out for me, but I will

it and @Jules’s method and see what happens. Thanks guys!

As usual @Jules was spot on.

My simplistic method of adding size to the inner shape works fine for simple shapes that are enclosed, but as I expected, where the insets touch, there is too much material and they won’t nest. 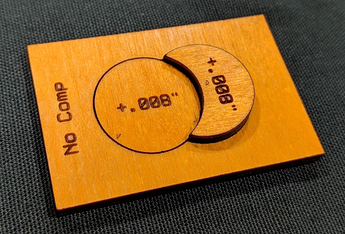 Making the enclosing shape 1/2 kerf smaller and all inner shapes 1/2 kerf larger does the trick. I still have to think this through and visualize it. 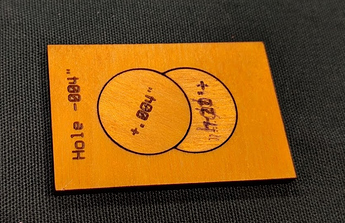 (There’s Sharpie instead of engraving on the crescent because my machine wigged out on engraving that vector, even though it was a copy/paste of the other +.004" right next to it. Hmm.)

Now these last-minute gifts I am making can become much more complicated than I have time for!

It is the cargo of canaries problem, proposing that if the canaries are in flight they do not add to the weight of an enclosed container of canaries, However in order to fly the canaries have to push air down so they can go up so the weight is approximately the same though there is some brownian motion as they push off or fall.