I have a bracelet that is made out of a soft rubber or silicon that my friend brought to me.

Back in China she had access to a laser that was able to make clean engravings on the material, but I can’t get the same effect with my glowforge.

Maybe someone more experienced can tell me what I’m doing wrong? Or ideas of what else to try? FT WORLD is the clean one, everything else is me playing with glowforge settings. The bracelet is .040 inches thick. 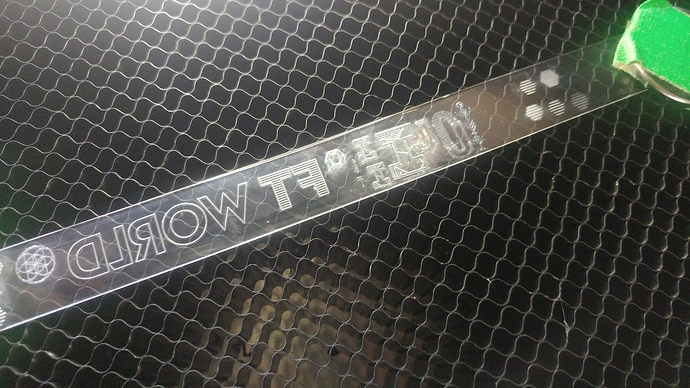 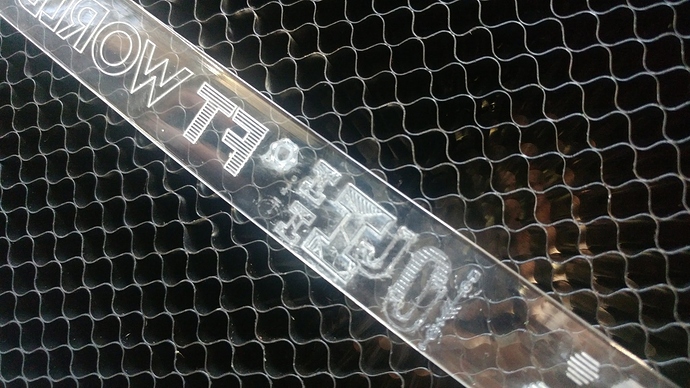 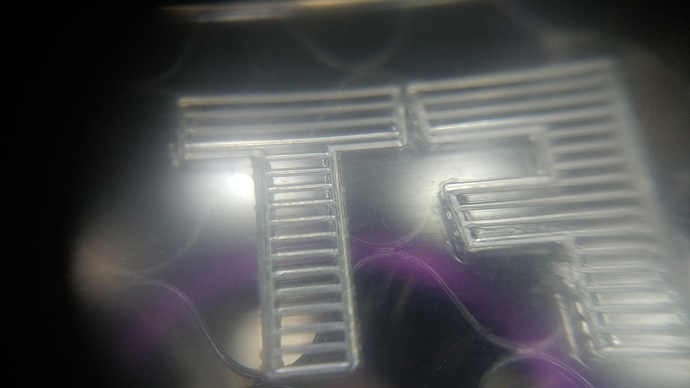 Also here’s a short video of the laser that was making the clean lines… to me it looks like the laser moves faster than I can get the glowforge to move even at engrave speeds of 1000?

Thanks in advance for any advice!

What settings were you using?

was playing with power, from 60 (not much of an impression) to 90 (visible at least) to full power (seemed the best, but i don’t know if going full power is getting the material melty and hence not as crisp as the example).

i also played with doing multiple passes at 30/60/90 power hoping that the time between passes would let the material cool before going deeper, but that didn’t help any.

the hexagons that you see were with different LPI settings. in general i was working at 225 but for the hexagons i dropped down to 75 and 35 at the max speed full power… and those lines seemed the cleanest although they are still thicker than the example lines. also don’t seem as deep/crisp, again the edge feels more rounded/melty when i run my nail over it compared to the example.

I think the laser in the video is a Fiber laser, which is totally different from our Glowforges in performance and price.

After some investigation, the material is

Checked with the maker (it’s a custom job) and that laser is also a co2 unit.

Maybe the manual control over focus height is key?

All I got is questions

Are you sure it’s engraving? Maybe it is scoring, which might result in a cleaner look.

I do think the OG machine is scoring rather than engraving, but when I tell the glowforge to score instead of engrave it moves too slowly and I don’t get a nice clean score even at low power settings.

not just fiber but a whole different way of moving the beam with galvo mirrors or something, isn’t it?

It’s a galvo based laser. Rather than a gantry like we have, it has motorized mirrors that reflect the beam where it needs to go. Very, very fast.

Not sure how to make your engraves better. What speed are you setting the score to?

Awesome work! I’ve seen others make Acrylic Molds to cast the Silicon with. Have you tried that? I’m about to test some molds throughout the week, and I’ll post my results if they’re any good. Ultimately, I’d like to make some adjustable one-piece bracelet molds, and once I have that perfected, my clients can order them with custom, with their logos, designs, names etc.