Remember the iconic scene in the 80s classic Say Anything where Lloyd Dobler (played by John Cusack) is holding the boom box over his head trying to woo the object of his affection? Of course you do. 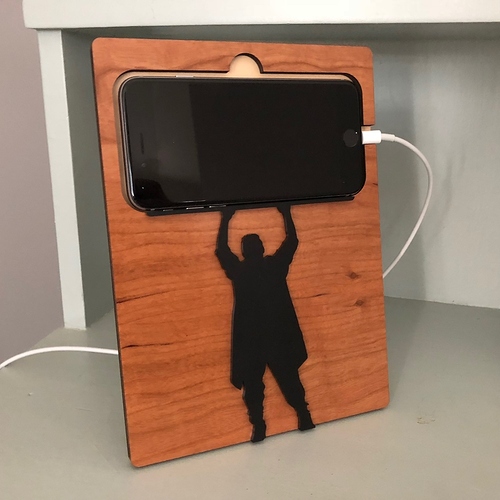 This is the third iteration of this idea I’ve made over the last few years, starting with screen printing (pain in the a**), CNC routing (looks good but time-intensive), and finally this. 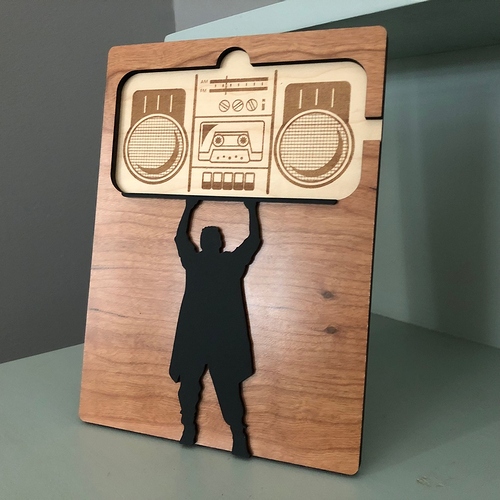 It’s made with medium maple ply Proofgrade as the engraved base layer, thick cherry ply Proofgrade on the front, and Lloyd Dobler is cut from 1/8 matte acrylic. The two wood layers are glued together, and the acrylic figure is glued on after being roughed up for better adhesion. A leg on the back is cut from the cherry section where the phone was removed, and is glued into the maple with a couple of tabs and slots.

Awesome design there! (Up to and including the boom box engrave for when the phone is in use.)

Of course you do.

I only remember parts of the eighties.

My wife would love that.

*Boom box not to scale.

*Boom box not to scale.

Funny that you mention that. I mocked up one where the phone was to the same relative scale as the boombox to his body. The whole thing ends up being around 15" tall. Awesome, but seemed a little excessive.

I’m thinking his kickboxing career would have been over if that was to scale.

I always preferred Better Off Dead

I want my 2 dollars!

This is one of the best things I’ve seen in a while. Awesome!

omg. I want this!

“Everybody’s coming back to take stock of their lives. You know what I say? Leave your livestock alone.”

(Sooo many quotes… My wife and I use them [and soooo many others from movies] all. the. time. I think the most used one from GPB is “Yer a fkn psycho.” “Don’t rush to judgement…”)