Hi folks,
I’m cutting some fairly intricate mechanisms that need to be numbered for easier assembly, so I’m using scoring to quickly label the components. But when I cut the project (Medium Draftboard, either Draft or High Quality score settings), it goes over each letter twice. This scorches the wood more than I’d like, and since I’m dealing with very small fonts (6-7pt), the results are often illegible.

I’m using Illustrator with the CNC Vector font, which claims to be a single-line font. Unfortunately, after expanding the text I find that it’s got extra nodes to create a closed path, hence the double score. Sneaky nodes! 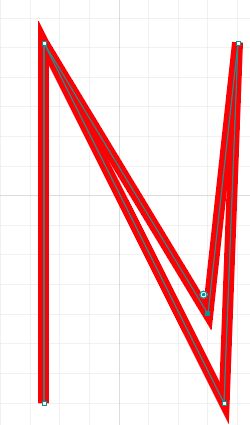 Is this an issue with the font, or with the way I’m converting the text in Illustrator, or some other variable? Is there a different single-line font you’ve found works well?

And on a slight tangent, some horizontal and vertical lines aren’t being scored at all, as shown in the “5” below. This happens on the High Quality setting as well as Draft. 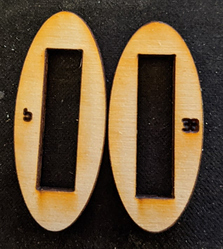 I’d welcome any suggestions. Thanks in advance!

There are single stroke fonts available for engraving. Try that? Like CAD lettering

One thought if the text is tiny is to engrave rather than score. Even if you have to go to a high LPI the amount of time is minor.

Check out this Single Line Engraving Fonts - The Good, the Bad and the Ugly 🤔

There are single stroke fonts available for engraving. Try that? Like CAD lettering

Supposedly, this is a single-stroke font. I’ve tried a few — AVHershey, CNC Vector, Machine Tool — all with the same results.

One thought if the text is tiny is to engrave rather than score. Even if you have to go to a high LPI the amount of time is minor.

Ah, good thought! I’ll give that a try.

Argh! That’s what I was afraid of. Looks like I may have to turn down the intensity and deal with the double-score. Any letter-by-letter adjustment is out of the question, given that I’m dealing with over 250 pieces in this one project.

This is the issue I’m having with lost strokes. In Illustrator is appears fine.

In the GFUI, I get arcane runes and incantations.

Double-score or not, I’d love to find a solution for this issue before I wind up inadvertently summoning demons.

Tedious, but you could create your own true single stroke font. Possible in a CAD program. But quite a bit of work.

On export, do you have it converting the fonts to outline?

I’ve tried SVG and Convert to Outlines; same results. I’ve been manually expanding the text objects since that test.

Another option is to significantly reduce the power (or increase the speed) of the scores for the one you already have.

I posted this for you:

Here it seriously looks like it’s got double lines - which the GF will just ignore. That the error is identical on the Ts seems to support that…

Here it seriously looks like it’s got double lines - which the GF will just ignore.

AH! I did not realize that double lines were ignored. You’re spot on: that’s where the redundant nodes are that close the path.