SeaBee Memorial Replica -- a project 6 years in the making

One of the first projects I wanted to take on when I got my 3D printer and became a maker was a scale model of the memorial just outside of Arlington National Cemetery – the one for Sea Bees, the Navy unit my grandfather was a part of in WW II. I always wanted to take my grandmother there, but since she lives in Ohio and doesn’t travel much, I thought I could bring it to her.

I modeled it starting from an Autodesk 123D scan a long time ago, but kept experiencing setbacks – Blender making it hard to create an engraving, the accuracy of my 3d printer leaving a lot to be desired, etc. After each setback I’d cycle back every couple months and get a little bit closer. Until I finally got my glowforge and was able to iterate in-house, making things go a lot quicker. Anyway, long story short I finally reached the iteration I was happy with and set to making it.

For reference, here’s the original memorial: 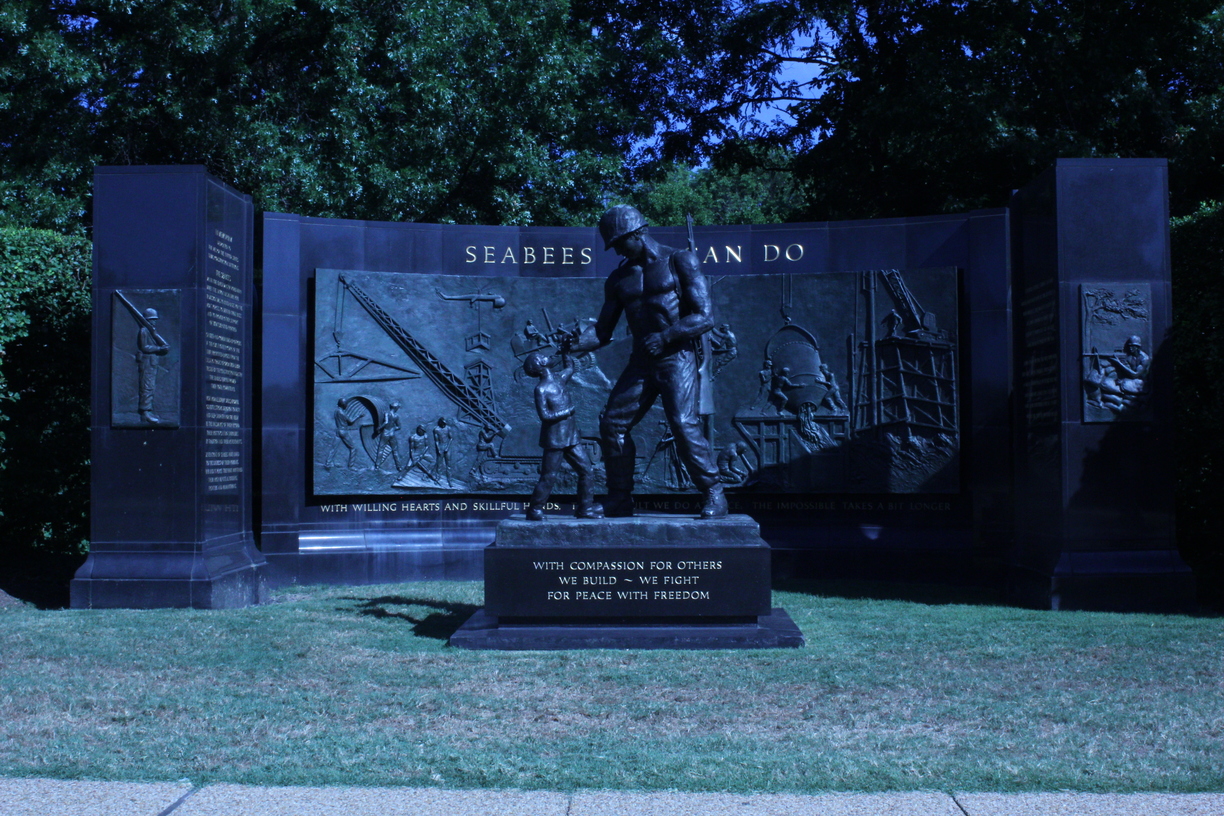 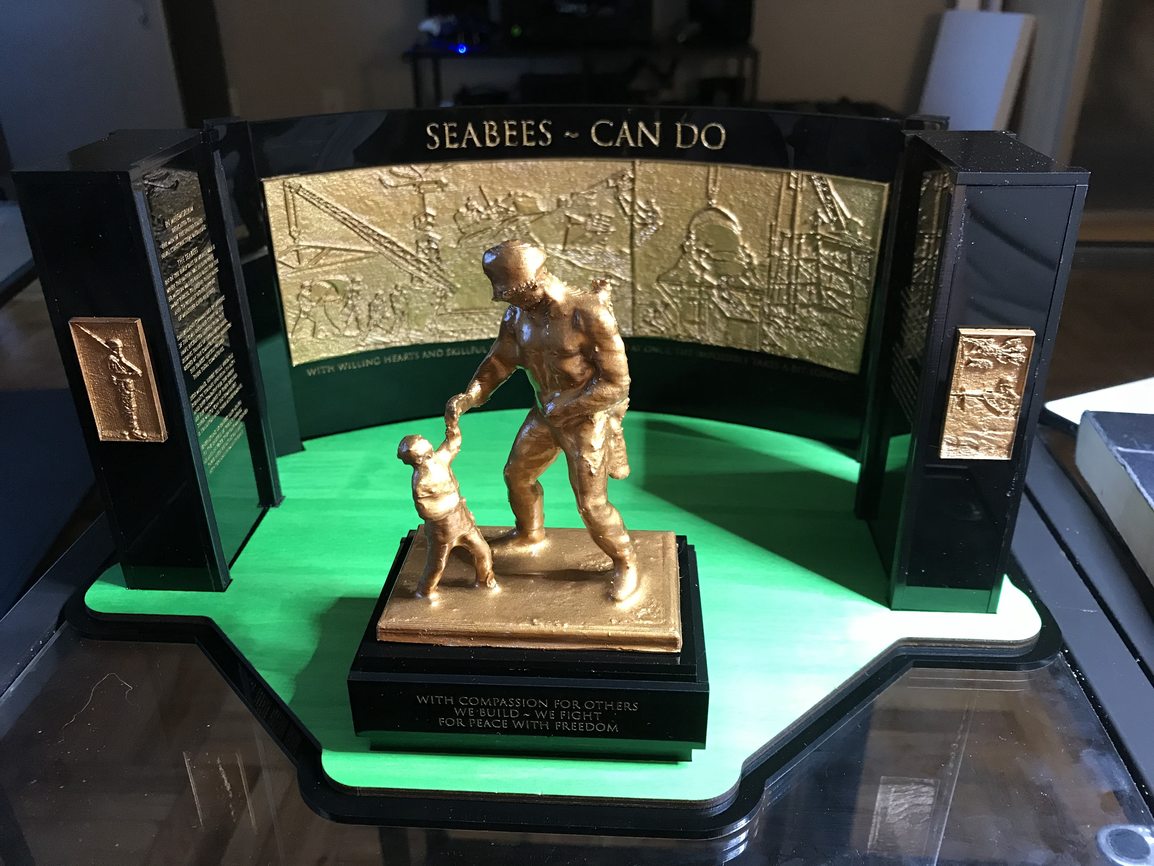 I also took a bunch more photos of both you can compare in this album online.

I got some pretty amazing results with 3D engraved acrylic and gold leaf paint, which is really thin but adheres REALLY well, so if you apply it with a wet brush it fills every nook and cranny, but then you can dab away the excess. Here’s a close up of one of the engraved pieces replicating the bronze plaques. 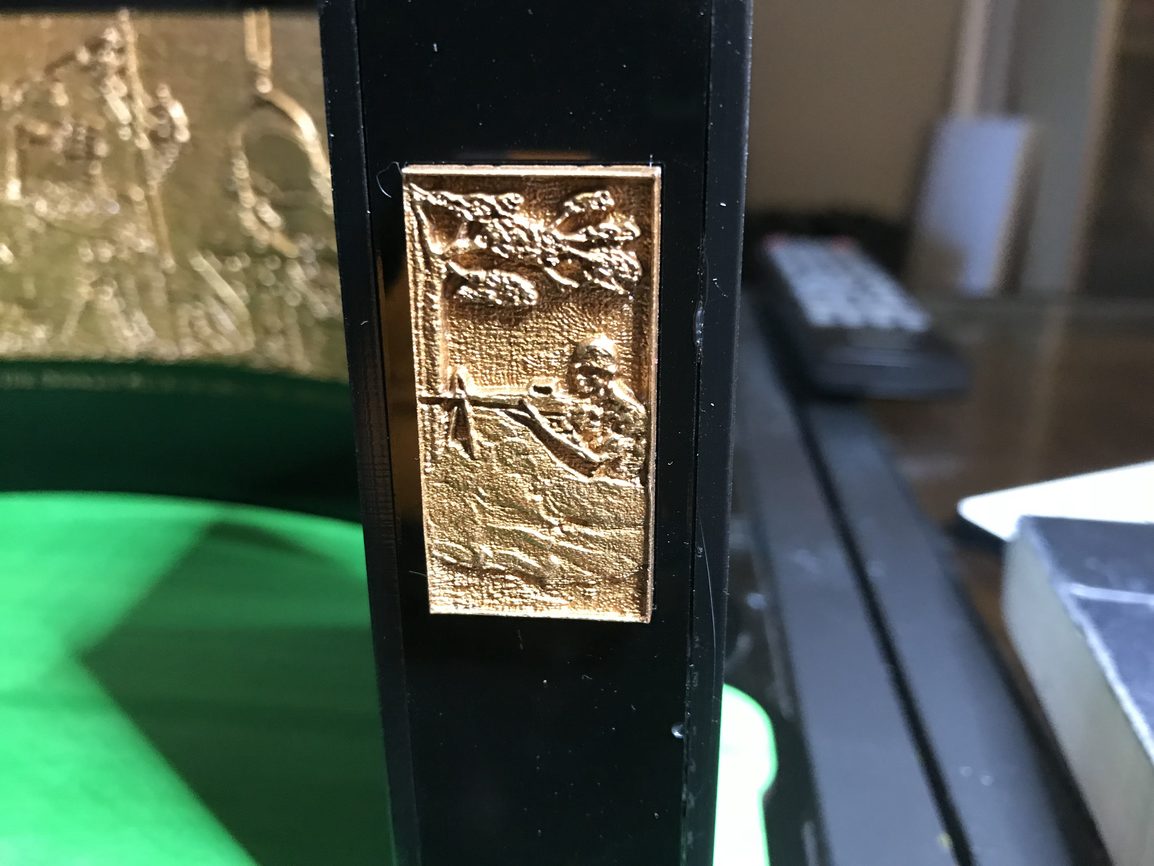 3D engrave also made the plaque images really easy: I literally took a photo of the original plaques and just did a touch of Photoshop manipulation. Some areas aren’t 100% physically accurate to the original, but you’d have to look pretty closely to see the difference.

Without further ado, the files. I put them in a shared Google Drive folder since there’s also an STL for the statue in the center. For those who have 3D printers, it should be easy to self-produce, if not you can probably order one from Shapeways.

I’m releasing this for free partly because I feel weird selling something like this, but also because I have no real idea of the rights situations involved – the memorial itself was built in 1973, so it could be under copyright? It also presumably belongs to the National Parks Service? I didn’t really look into it, since the rules are pretty lax about artistic recreations given as gifts, but if you were to download this and do something else with it, it’s up to you to navigate the rights issues involved.

That is just outstanding.

I have the ultimate pride and respect for those that have served, and this level of effort is for me what any of us should be willing to give (if able - most of us here qualify) to show our appreciation.

So, strictly in the spirit of contributing, and hopefully making it even better, have you seen any of the videos showing how to use a vapor to “soften” lines in 3d-printed objects? I have to wonder if that technique might smooth out some of the texture left behind by the engraving process.

I might try that on future projects. My makerspace is just my apartment, though, so ventilation isn’t the easiest, and I understand that vapor is CRAZY toxic. In this case I’m happy with it because the original bronze definitely had some texture to I think it lends some authenticity.

Wow! That’s all kinds of incredible!

I always wanted to take my grandmother there, but since she lives in Ohio and doesn’t travel much, I thought I could bring it to her.

That is so thoughtful, and the resulting work is outstanding.

And thank you so much for sharing the files! I’d like to try my hand at this. My stepdad was a SeaBee in Vietnam. When he returned stateside, he used the skills that he learned in the service to find work as a carpenter. Today he’s a contractor, and he still takes great pride in how he came to his trade. I think he’d really love this.

What a beautiful and loving tribute to your grandfather. Thank you for offering your work to the community.

What a labor of love! Really outstanding, and all your hard work really shows in every aspect of this piece. Well done!

and I understand that vapor is CRAZY toxic

I do a vapor bath for ABS in an old crockpot - it keeps the fumes contained so it’s no worse than when my daughter uses nail polish remover on her fingernails. I putthe parts & pot out in the garage to air out/offgas overnight.

Yeah, this is definitely an area where a garage would come in handy. Ah, well. The sad limitations of apartment dwelling.

The sad limitations of apartment dwelling.

This is really good.

So nice that you will be able to share with your grandmother. She will be thrilled with all of your efforts.

Great job. Looks fantastic. I am constantly blown away by the creativity on show here but this is special.