Here are laser cuttable bits for secret hitler (which is released under the creative commons license). 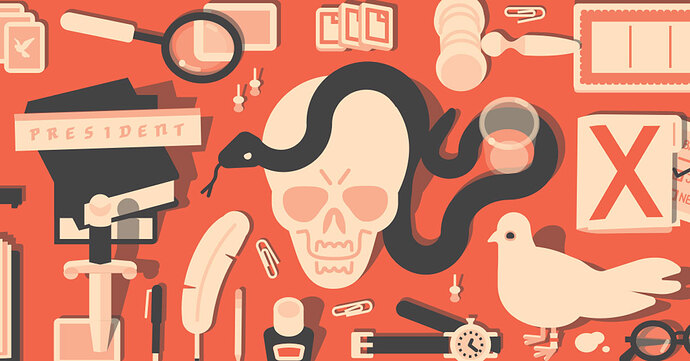 A social deduction game for 5-10 people about finding and stopping the Secret Hitler.

this has plans for the boards and a way to cut out the wood decision pieces for the roles, plus card designs to use (I printed them using a card printing service). The tuck box is for a different rethemed version of the game I setup. Much easier to organizer larger projects like this with multiple pages in illustrator I find than in something like inscape, which is why I include the illustrator files here.

Added some svg files to this as well. These are the ones I cut out anyway, the main boards I printed and then cut out a chipboard base to glue them too, used black paper to cover the chipboard first and then glued on top of it. Looks pretty good in the end… I added the templates for the black paper i used for the draw and discard piles too (although you could do those directly with wood). The president and chancellor I painted the boards first and then engraved cut them to make into the folding boards, then I put everything in the box

The sleeve is a bit tricky. I used cardstock and then score with the laser to make fold lines and then cut along the other lines. I printed it on paper and then use that box on the page to cut a template in something else to place the paper into so it will line up when the box is cut for folding (this is also how I do the tuck boxes for the cards).

The Glowforge can only cut PDF and/or SVG files.

Glowforge can only cut PDF and/or SVG

Inkscape can open them

Not everyone uses Inkscape. (I don’t.)

Thanks for sharing. I’ve heard a lot of good things about this game. It looks like you put a lot of work into getting the AI files just right.

I’ll just have to DL a couple fonts and then give it a go!

The Glowforge can only cut PDF and/or SVG files.

Or copy/paste from Illustrator (a hot tip from Dan a couple years ago).

I don’t use Illustrator.

My point actually was that AI files are not the best for sharing here.

Fair point, added svg files. Although left the ai files for those who would like to use those too.

That may or may not be, but they’re still a very nice free share🙂 and the statement about pdf/svg isn’t entirely correct.

Not everyone uses Inkscape

Corel and Affinity too.

What software are you using? Maybe there’s a plug-in or add-on that will help.

Thanks for the thought James.

This wasn’t the first time I’d seen AI files shared so I thought I’d point it out.

My underlying thought is that it’s not that uncommon a format, nor is it terribly difficult to open in other apps (something someone who buys files especially should get proficient at). I don’t think we should be telling a gift-giver (the OP) what format they need to deliver the gift in.

Perhaps they don’t know how to create a different format. Or they don’t want to go through the extra effort of creating additional versions. As a recipient of the gift of a free file it’s up to me to determine if or how I can use it. It’s not the gift giver’s job to make my life any easier than they already have by providing the free file.

I’ve heard this game is a lot of fun, thanks for the files!

@pinkfishfrog Thanks so much for sharing these! I created a version for personal use that I can’t share here (I won’t tell you why but it involved IP… the Fascists were reskinned as Imperial Forces if that gives you a clue) and it was a delight.

Folks are welcome to post in whatever format here they prefer.

I rethemed this a couple of times. I did one where people are trying not to play monopoly at a party and another with a theme of fosters, where you are trying to drink a real beer so longs as the wrong person doesn’t get in the car. Some of the themes are a bit of a stretch :). Started with the main game however and messed with it from there.

We play this game a lot at work during lunch-time (pre-pandemic). It was a lot of fun. Thanks for sharing the files, I’ll probably cut a version out of wood.

Instead of printing the cards, I might actually cut them out of wood as well. There are not that many cards, and getting “tiles” instead of cards might actually be nice.

The other game we played even more is Avalon. It’s a similar game. If you like Secret Hitler, check out Avalon. We found that Secret Hitler worked well for an even number of people, but not an odd number (or maybe it was the other way around). Whereas Avalon was always good, no matter how many people you had.