Hello,
I’ve found several mentions of cutting wenge but I see no suggestions for settings, having never laser cut solid wood I do not know where to start:
-I am trying to cut through .200"-.250" thick wenge.
-should I be doing super slow or rather fast and several passes? what power?
-on a different forum someone singled out wenge as being somehow more toxic when burned because of it’s oil or something. any truth to that?
-I have a project I’m working on where I intend inlaying the ~1/4" wenge with a gold textured acrylic. the acryilc doesn’t have to be flush with the wenge. would you cut out the wenge or just engrave it deep? my thinking is that it is less “work” on the laser to cut a vector out instead of engraving. but am I wrong? obviously I still don’t have a good feel of my gf’s powers…

It is a lot more work to engrave a cut than to use a vector line for a cut. So use a vector. The only known case I am aware of where an engrave cut is preferred to a vector cut is in paperwork. The glowforge’s cut and score operations can leave a slight over burn on corners. This is an issue on paper, but not wood.

I haven’t cut wenge, but generally you want to start at the highest power and fastest speed (which will probably be around 200.) I can cut .25" poplar with a single pass, but similar thickness black walnut takes two passes. I haven’t read anything about toxic fumes, but the oils in some tropical hardwoods can make them very resistant to being laser cut. I would expect that with proper ventilation, and the small size of the kerf, that if any worse than normal fumes do exist they’ll quickly be diluted to a ppm that renders them mostly harmless. 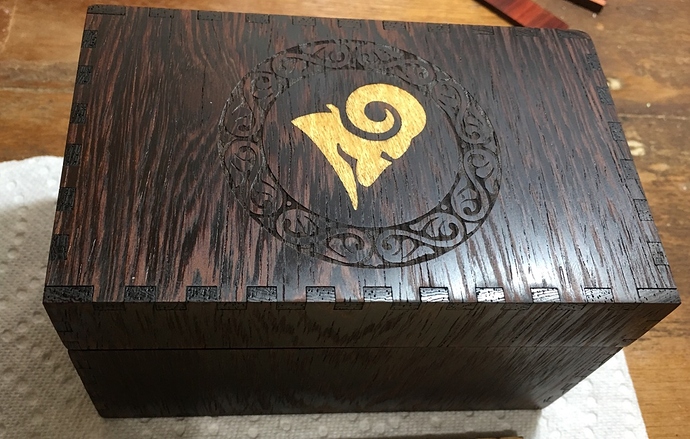 Not apples to apples but it was 170/full/1x pro to cut the wenge.

Gorgeous! One of these days, I need to make some boxes.

I’m assuming the finger joints were not glowforged, right?

Entirely Glowforge, entirely friction fit. No glue at all necessary but I did end up using glue on the inlay as I wasn’t sure if the two woods would react to humidity and temperature changes the same way. Glue was just insurance.

I just picked up some wenge Saturday, this will be handy when I decide what to make with it.

(BTW: How do you pronounce “wenge”? And “padauk”? Purpleheart I got.)

beautiful! so what did you do about the scortched laser marks on the fingers? did it wipe off, did u sand them? did you have to account for sanding when sizing them?
so many questions… how did you fit the lid? did you engrave a lip? what’s inside the box?

Anyone have good luck with Purpleheart? Stuff loves to char (does that mean faster speed higher power?)

I set the material depth in the box generator to be about 0.01” thicker than the actual thickness. That way the fingers are slightly proud. Then I sand them flush and voila, no char! 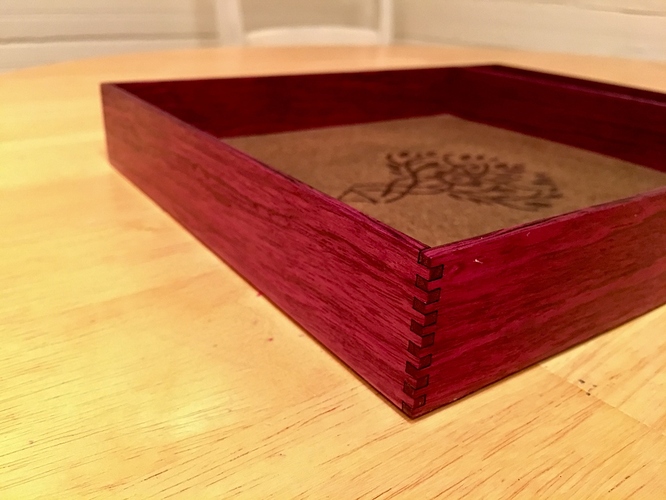 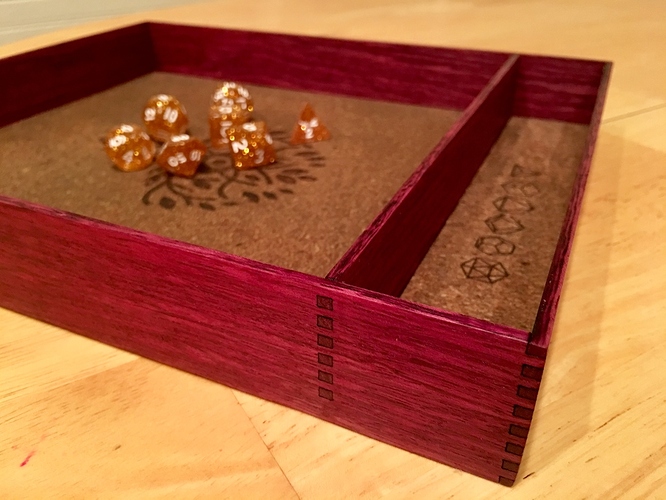 I’ve not yet found reasonable settings for cutting through 1/4” wenge. Even at 100/full/1 pass it doesn’t cleanly cut through, and multiple passes leave tons of char. Same for thick purpleheart. I think the best way to cut it is manually do double-sided cuts with a jig and flipped vectors.

Where’d you source it? Green valley is my go-to but if you have another a backup would be good.

Local Rocklers. (Not much of a selection, but more than I can get at the hardware stores around here.)

I buy mine there. Been quite happy with the quality.

I think one of the keys is eliminating char. I think char eats the laser energy for breakfast. I think you might have better luck doing some faster, full-power runs.

That’s a lot of thinking based on nothing more than a half-educated guess.

Not sure about padauk, but wenge i believe is pronounced ‘win-gay’.

Ahh! Many thanks. (The store owner didn’t know either.)