The first discovery is what @Jules was saying that I finally understood, that you can use the standard ctl-x, ctl-c, and ctl-v inside the GFUI just as ctl- z so rather than dragging in many copies of the same thing, you can copy-paste and get as many copies as you want.

There is one thing to keep in mind however, if you drag and drop the design multiple times, each piece will have its own layer, where if you copy-paste the cuts will all be on the same layer. (Interesting enough the cutting will be in the opposite direction.

The second discovery was that I had made a lamp handle trying to do a deep variable engrave to make the handle round. That idea failed on the first try but looked very nice except it was black and burnt. I tried cleaning with the hand cleaner, but it was still pretty burnt. So finally in despair I put it in a jar of bleach, and all that black instantly vanished! I immediately tended off the bleach and then put it in the hand cleaner to drive out the water, and suddenly almost no sanding was needed.

@Jules also talked about doing chain but it was dificult so I tried soaking the links that would have to move in hand cleaner and as expected they were able easily to grab new links. Then I had some 0.31 oak parquet that was extremely hard and tended to burn rather than cut. So I tried soaking that in water and indeed there was a lot less burning and the fire did not expand as it had on the dry work.
I even put water in the first cuts and ran them again and the cuts happened but I had trouble holding the exact place.

So in any case all the experiments turned out one piece if chain of mixed materials but a chain finished was not the object of the exercise. 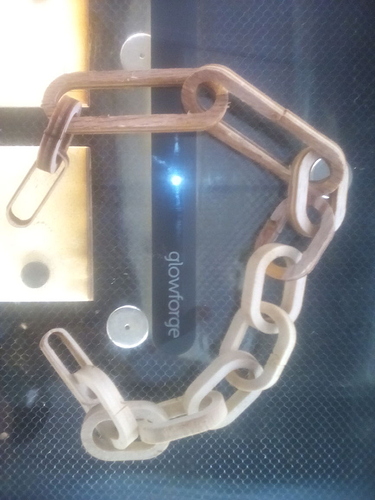 Did you wind up with any warping of the material from the bleach?

And yeah what material did you try this with?

Sorry about being so late with finishing the post. There is poplar, oak plywood, and solid oak in the mix. You can judge for yourselves about warp. As I have been warping the basswood 360 degrees and by letting it dry while holding the curve makes it want to stay at that curve unless it gets wet again.

Knowing this I realized that soaking in the alcohol allowed to flex and it would go to least resistance. Therefore if something warps enough to be a problem, you can get it wet again and force back to flat till it drys. The mistake I made before was trying to force it back while dry, and while it may spring some it does not take to the new flat shape well.