Question. Recently got myself a brand new hose (and insulated one!) and I had a ton of excess hose so I cut it in half (yay, back up hose) but I’ve recently learned it’s still about 2 feet too long for the fan to be pushing stuff out and I plan on fixing that today by cutting it down further- someday I’ll have an in-line fan.

Anyways, question, I know a long hose is bad but can you have a hose too short?

I’m upgrading the spot where I keep my GF and it’s right there at the window, excess hose kind just gets all smooshed up around the back before going out the thing. I have one of these things in my window now where the hose connects to go outside- 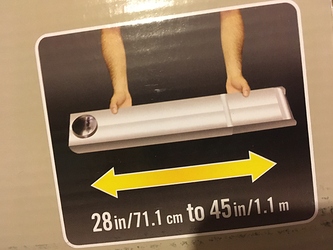 And a thing on the outside of it that has shutters to keep stuff from being blown back in. When not in use I always remove the whole setup from the window cause we don’t trust the people coming and going from the place nextdoor. XD

Here’s what the rest of my current setup looks like at the moment. When in use (aka, back into the window) I tape all the gaps up. The blanket is because it’s winter time here and a lot of cold escapes through the glass. 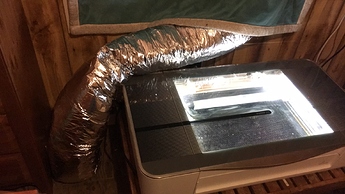 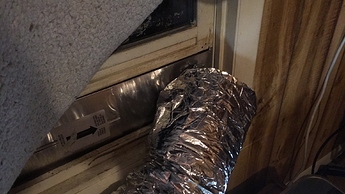 Also despite looks my hose is fully connected to both machine and window thingy- you’re just seeing the bit around the insulation that’s around it.

Right now, my GF is on a table that is literally ankle height and that’s fine but I’d really like to move it to something higher. I have a dresser that is the perfect size for my GF (like, right on the nose for measurements) but comes up just above the window opening. Hence why I’m thinking about how much I can cut down the hose.

No, the hose can not be too short. It’s tight bends you need to avoid.

Is that one of those snorkel/periscope extensions, though? That’s a very bad idea because it’s effectively right-angle turns.

The machine works just fine without a hose. It just stinks up the place.

I feel like without a hose I’d be dying from fumes. That seems more than just a stinky idea.

Seriously though, with a shorter hose do you think I’m in for more stink or that the GF fan would be able to blow it away better?

The hose can have rounded corners in the hose, like the first image below, but a sharp angle like (what appears to be) that extension panel is not a good idea.

As to hose length, a few feet vs two feet will make no difference.

I would not recommend using without a hose, I just meant the machine will still operate fine.

As state above, operating without the hose is not advised. As for the telescope extension- You can use that but you would also have to get aluminum tape to seal up the gaps. Stock it does not seal at all as this is designed for a dryer.

As 90 degree bends, the extender has two half moon bends on each end. Glowforge recommends no more then two 90s in a run. But depending on the length and if you have a booster you can run more. If you do that, Glowforge will not provide support unless you reduce the amount of bends.

I used that same exact thing for about 4 months (with tape). Then switch to an insulated hose to reduce the noise. My setup has 3 90 degree bends also has a booster down range- total run is about 21ft.

I’m wanting to set it up to have no bends honestly. I’m thinking a straight shot, 2 foot hose to the window vent.

Also, despite how it looks in the window it is all sealed up. These photos are just after my first test installation.

Then it’s looking like you’ll need to raise the GF up to line up with the window and push out to accommodate a short hose and two clamps.

My setup might be a challenge to beat for shortest hose length. Probably not longer than 24" at most. I’ve been running it like this for over 2 1/2 years now without any problems. 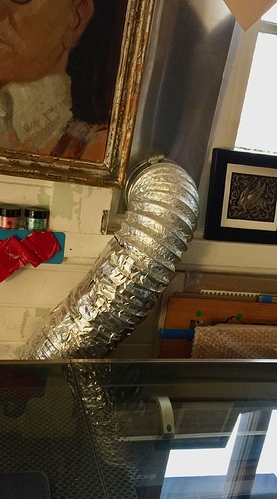 Yup. Mentioned in my above post that I’m putting it on something taller.

Thank you! This is what I needed to know! Do you find yourself dealing with more smell?

but a sharp angle like (what appears to be) that extension panel is not a good idea.

I can understand the logic, but I’m afraid I’ve been defying it now for a long time. Mine is hooked up to one of those periscope style vents.

No. None at all. Only when the lid is lifted after a print.

This is exactly what I needed to know. Thank you so much.

Do you find it being shorter maybe helps the fan out a bit more? Also have you ever had to clean your periscope at all?

Mine is exactly 24 inches.

Could I see a picture of your setup? Do you have a straight shot out or any kind of bend?

helps the fan out a bit more?

There’s no way of knowing that. And no, I’ve not ever cleaned the periscope part.

Right now mine is waaaay too long, it’s in a big loop behind the machine and I knew I had to cut it down (my husband’s logic was longer hose better bless his heart) but the more I thought about it the more I was like I bet a short one would actually be the way to go, much less chance of me smashing it against the wall and kinking it and less distance for the air crud to travel.

That’s my logic, too. The shorter the hose, the sooner the smoke and odors are out of my space. So far, so good. Best of luck to you!

Just the one bend. I used a piece of hose from my shop dust collector and connected that to a dryer vent installed in a piece of plywood which I close the window on. You can see the tape where I seal the window to plywood crack. I remove the whole thing when I’m not using the GF. 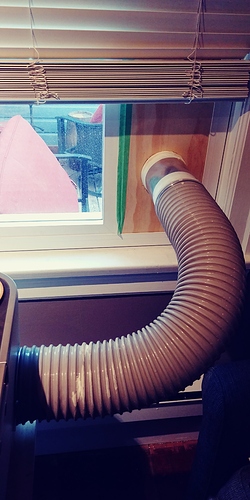