My room is roughly 100 square feet. My set up is a plastic sheet in place of a insect screen to vent.

Wood and acrylic was okay until leather trials.
When we cut leather it smells and it goes into my room and stays there. Since the window is blocked it doesn’t air out unless I remove the hose. I was about to buy a $75 extractor.

A $20 solution worked for my tiny space! It still smells but it disappears quickly because the husband’s little fan idea 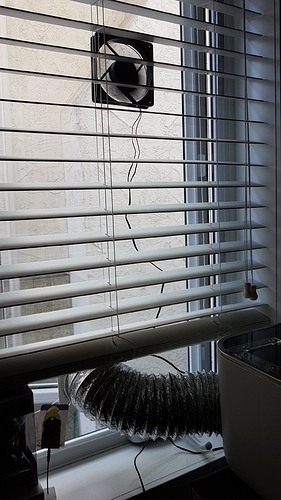 I noticed a significant reduction in odor (and noise!) when I replaced my exhaust hose with one of these https://amzn.to/2Q4CQvg
The cheap hose that comes with the

likely has many micro holes in it (others have observed this) So you may want to check that out too!

Smell was always okay but I think its because my hose is short. I wanted to get something like this for the noise but I wouldn’t be able to get my hand around it to open the window. Maybe when I do vent window 2.0. My goal is to get a Rayjet one day!

I just replaced my original aluminum flexible hose with the link you listed. I actually found a 10 ft section at my local Menards for only $10, so I figured I would give it a shot. It definitely has muffled it a bit, and the air does seem better. However, I would say there is still a fair amount of noise.It is maybe 25% quieter if I had to guess. I didn’t insulate the last 18 inches or so, because it goes up through a basement window well and the insulation is not rated for outdoors, which could be the reason it’s still a bit loud.

I will say that the odor is almost non-existent now, after 30+ minutes of cutting. That makes it easily worth the $10

The cheap hose that comes with the

likely has many micro holes in it (others have observed this)

mine sure doesn’t have any holes. Initially it leaked from the tiny gap caused by the spiral wire at the GF connection point until I added a small strip of adhesive foam around the inner circumference of the hose.
There is a sub layer that has micro perforations that some people thought were holes going all the way through, but that was a trick of the light. Out of the box, there should be no holes at all. Granted, holes can develop over time, especially if the hose rubs on something, or is moved/stretched/handled a bunch.