Sizing without the Crumb Tray

Is anyone else having a dickens of a time getting things the correct size when not using the crumb tray?

In the picture below you the blue arrow is pointing to where the design ended up being when I tried this the first time. I had it lined up on the MacBook so it would go edge to edge everything looked great so I pressed the button to start it and boom it started about tan inch and a half from up from where I aligned it and about a half inch in on each side of the computer. But still during the first run I did (which only lasted like 5 lines) it was still showing me it was aligned right where I wanted it to be. SO I stopped it and re-sized the image to be much bigger then the computer. Which is also what I’m showing in the picture below. The red part in the image is how I sized the image. So far so good and it seems to have done the whole shrinking thing again but since I over compensated the size of my image I tried to correct this glitch…Does that make any sense? 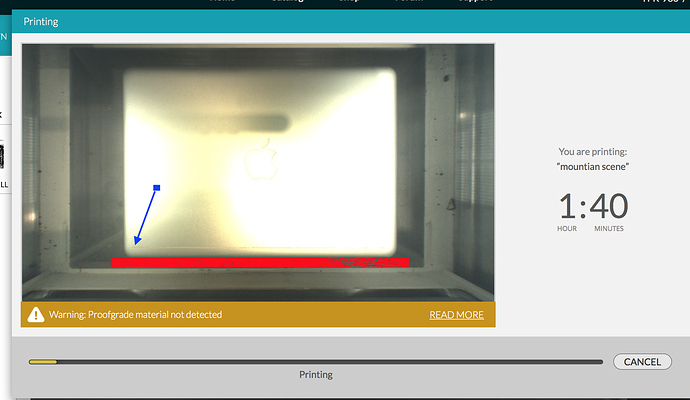 Trying to engrave on an unsupported item is why your alignment is so far off.

There 's a good tutorial here for how to engrave without the crumb tray:

Various Height Bed Risers Made on a Glowforge

These are terrific, thanks for posting!

I’ve tossed them onto GitHub.

Things that can be made. Oft with glowforge, ultimaker or like minded shopfoolery.

I just came here to ask the EXACT same question!

I did the measuring, but when I align the engraving to the center of the material in the GFUI, the actual engraving starts off to the right instead of in the center…

You can’t rely on the camera to align something “free form” on the bed. It’s just not accurate enough. It can’t be. It is a very wide angle lens that generates a fish eye image, GF software “flattens” the distorted fish eye image to make it rectangular. The geometry of this is extremely sensitive to the distance from the lens to the surface being imaged. It’s also very sensitive to small distortions in the camera lens. Things that can’t be calibrated out.

The trick is that you need a jig. The easiest way to make one is to enclose your design in a rectangular outline, then position your project on the bed where you think it’s relatively well centered on your stock, then set everything but the rectangle to “Ignore” and the rectangle to “cut”. Then grab a piece of paper or cardboard and tape it down to the crumb tray and then cut the rectangle. Remove the plug you just created and put the thing you want to etch in the opening. Then go back to the GF app and set the rectangle to “Ignore” and everything else to etch/cut as appropriate for what you’re doing. Then print that. Viola! Done, with perfect alignment!

I just tried my first attempt at etching anodized aluminum today. The pieces I have are about 1.5"x2"x0.120". I laid out my design inside a rectangle that I had sized to match the dimensions of my pieces of aluminum. Then I taped a piece of corrugated cardboard to the crumb tray and I positioned my project over the cardboard in the GF app. Disabled the layers except for the rectangle, which I then cut. Then I pulled the plug of cardboard out and dropped my little anodized tile in to the same-sized opening in the cardboard. Then I went back to the App and disabled the rectangle and enabled the other stuff and printed again. Result = perfect alignment.

This is a tag for my Radio Control transmitter, showing my name, registration numbers, email and phone #. Came out awesome, and my very first attempt. But if I had just placed this part on the crumb tray and tried to align it via the camera view it would not have been correctly aligned (I learned that lesson last week). 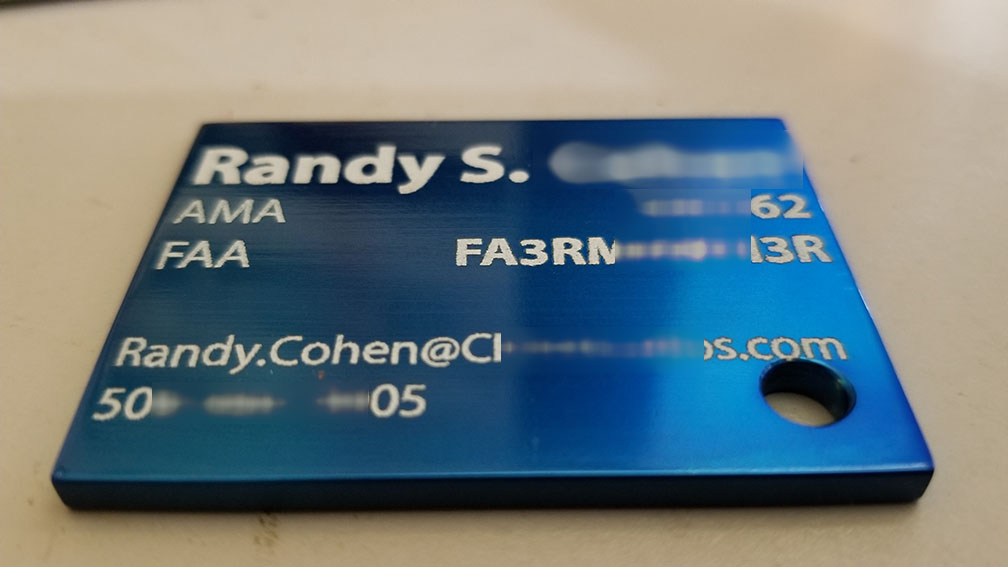 Great discussion! Since we’re still working on support for Macbooks, I’m going to move the conversation to Beyond the Manual where it can continue.

Looks like it came out all blurry to me.

Yes, a jig is definitely the way to go when you need spot-on placement.

I have many years, dare I say decades of experience with CNC and with 3D printing. I’m not so much in to art as functional prototyping. I’ve found that Laser cutting requires a totally different design approach than 3D. And while at first I struggled to adapt to 2D drawing with my 3D CAD software (because I never did this before), the way GF works with vectors the 2D drawing doesn’t have to be actual polygons. Once I realized this the design task became much easier.

I’d actually figured jigging out last week for parts I need to cut and etch double-sided. This week was the first attempt at an otherwise free-standing component. I had some PG Medium Acrylic in the GF from an earlier project so I just cut the rectangle out of that to use for my first attempt. But after I tweaked the design a bit (the “.com” is too close to the hole) I realized I could not use the same jig because there is no way to bring additional geometry in to an existing project, and backing out to load the new geometry means I lose the physical location of the original artwork used to make the jig. I was bumming, thinking I’d have to waste a lot of PG material to make more of these little tags. But then I realized cardboard would work as well. I sliced one of the lid pieces off a random cardboard box, measured it with calipers at 0.145, and taped that down to the center of the crumb tray. Then I set up my artwork in the middle of the cardboard, cut my jig and then inserted the aluminum tile and etched it. Worked great. And I have a ton of cardboard boxes to use as sacrificial material.

The GF App would benefit from a feature that let you load new artwork in to an existing project. You could make much more efficient use of the workpiece if you could leave old art in-place. Set it to Ignore so it doesn’t waste time being recut, and then load new art. You would be able to position that new art anywhere you wanted (avoiding the old art) and not have to worry about camera alignment.

It’d also be handy if the GF App had an “array” function that created a specified column/row count of duplicates of the selected artwork. If I want to make a dozen of something, I have to duplicate them all in the source file so they’re all present in the SVG. This is not consistent with my other CAD/CAM workflows, where duplicates are created at the CAM step not the CAD step.

If in addition it’d be great if there was a dialog box that let you set the absolute position of the artwork on the work surface. If I wanted to make multiples of this little name tag but with different people’s names, I could use the exact same base Illustrator file and just change the text. The resulting SVG would have the same “bounding box” as my original version. So if I knew exactly where (cartesian coordinates-wise) I had put the first version (which I used to create the jig), I could then put each successive new version at the same location and that’d let me reuse the same jig repeatedly.

You can load more artwork into a project. It used to be rasters only but now it allows vectors as well.

The GF App would benefit from a feature that let you load new artwork in to an existing project. You could make much more efficient use of the workpiece if you could leave old art in-place. Set it to Ignore so it doesn’t waste time being recut, and then load new art. You would be able to position that new art anywhere you wanted (avoiding the old art) and not have to worry about camera alignment.

As @palmercr mentioned, you can definitely add artwork to an existing/working file.

You should see that option between the material type selection box and the job operations list: 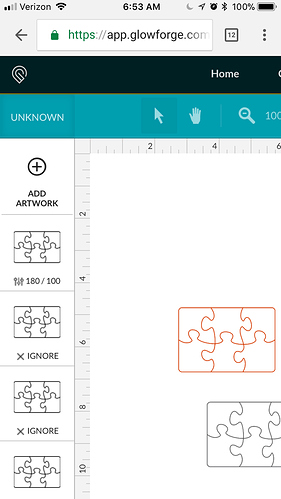 One little trick to that is that while the camera may not be the most accurate thing in the world at the moment, the offset is perfectly consistent if all things are equal.

For example, the little puzzle I posted in made on a Glowforge yesterday. I engraved and cut it; removed it for painting (leaving a jig pinned in place); put it back in to cut the puzzle; and then had to “upload artwork” because I didn’t have a puzzle design in the original file. All I did was align the puzzle cutout to the on-screen representation of the original line cutout. And voila - perfect placement.

It was propped up to be about 1.5… I thought thats what it needed to be without he crumb tray

Oops, sorry, you can’t tell that’s propped up from the picture.

Depending on the thickness of the MacBook that might have been fairly close - did you enter the difference in height between the surface of the MacBook and about 1.36" into the Unknown Materials button? (I think it’s approx. 1.36" but I don’t do a lot of off-tray work and haven’t measured.)

I should have mentioned it was propped up in the original post! I think ill just have to have another go at it and see how it turns out!

Once again, I came here to say the camera was distorting the image and I was having issues aligning and once again, a solution was waiting for me.

It’s too late for me to try this, but I will when I have time.

You guys are the best!

Here are a couple of quick and dirty riser grids created with boxes.py.

These are sized for 1/8" (3mm) material – ply, draftboard, or acrylic – hope they are useful to you.

Started working on non-standard thickness materials. Took the plunge and engraved my 13” MacBook Air using the GF MacBook Pro presets. Jigs worked perfectly! The plan is to cut 4 more to support my materials with 8 points on 4 sides and add magnets. The highest step setting is 1.445” so higher than the crumb tray’s 1.367” Notice since the Air is thinner on the front than the back. I used the 2nd and 3rd level steps to achieve a level working height. [image] [image] [image] [image] Crumb …