When I have a small object, I can’t grab on to it and move. The 4 directional arrow doesn’t appear, only a 2 directional arrow. So then the only way to move around is with the arrows on the keyboard and that’s soooo slow!!! Or I could make the object bigger, move, then make smaller, but then I’m only guessing at size, not accurate. Thanks for any tips on this.

Not a perfect workaround, but holding down Shift while pressing the arrows will greatly speed up movement.

I usually just enlarge the viewing size of the screen to the point where I can move it.

Someone was having this problem with moving a single line and it came up that they were selecting, and then going back to try and get the 4 way arrow - if you hover before selecting you should see the arrow then click and move all at once

There it is: How do you move single lines in the browser UI?

Thanks, the zoom helps.
I do see the 4 arrow when I hover. I’m dealing with letters so if I then click, it just selects one letter and it sadly leaves it’s other row of characters!

Go back to your artwork and make them a single path with a union action. The ui will move them as a unit if you do that.

make them a single path with a union action

in the meantime you can “draw” a box around them while holding the shift button, and it will select/move/re-size them all together

Single path is the only way to be sure, like nuking from orbit.

If you start to do that stuff in your art and get into the habit it will prevent all manner of issues later. But yeah for this you can drag them at the same time.

@evansd2 and @deirdrebeth thanks so much for the single path union info. i’ve just been ramping up again on illustrator, so YES, any habits that prevent all manner of issues later is a HUGE HELP. i will make this the next step after outline of letters…the only trick is I can’t find how to do that! I’m looking in the menus but don’t see anything in likely spots, probably just overlooking it?!

Look in the Pathfinder menu. It’s the first choice on the left end of the icon list.

THANKS! I’ve got a pretty old version of Illustrator, CS5…I’m guessing “merge” would be what I select? 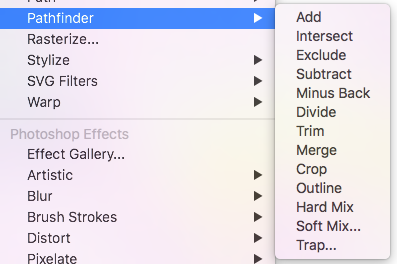 Hmmm. I think it would be the one called Add. Nowadays it’s called Unite. But I could be wrong about that–hopefully someone who knows can step in. I used to use CS5 but recently upgraded my OS and can’t fire that version up any more.