So I’ve attached cut files for these shelves:

The shelves were a generic request to the forum from she_is_evil. I made them mainly because it forced me to do a couple things I wanted to explore in OpenSCAD. They definitely furthered my ability to think in how to structure physical objects with repeating patterns.

Here is a shot of how the backs (except the very first one at the bottom) have a tab that slides into a slot in the shelf. To assemble, insert shelves first and then insert the backs.

BasicShelfTabAndSlot.png1013×383 645 KB
The two dozen clamping jigs on the bottom shelf are not included; they photo bombed me.

Awesome, thanks! That’s an interesting array of objects you keep in your pantry…

Looks like it would make a good spice rack. Thanks for sharing that!

Do you wish to expound on this foreign concept for a neophyte of limited experience?
Because I really wanted some support and two more hands to help clamp a mess together the other day.

I am far from an expert in joinery, but here goes…waiting to be told the correct method I totally missed.

So there is this more or less L-shaped closet that seemed to work fine for many years. But then a new person started using the closet and I was informed its current configuration is very inefficient for its intended purpose and I could undoubtedly make something better. So I came up with a design, but became stuck on the assembly process especially as I would be working solo on it. I rejected a number of joins for a number of reasons, not the least of which is it’s a freaking closet. So I settled on cheap and dirty: 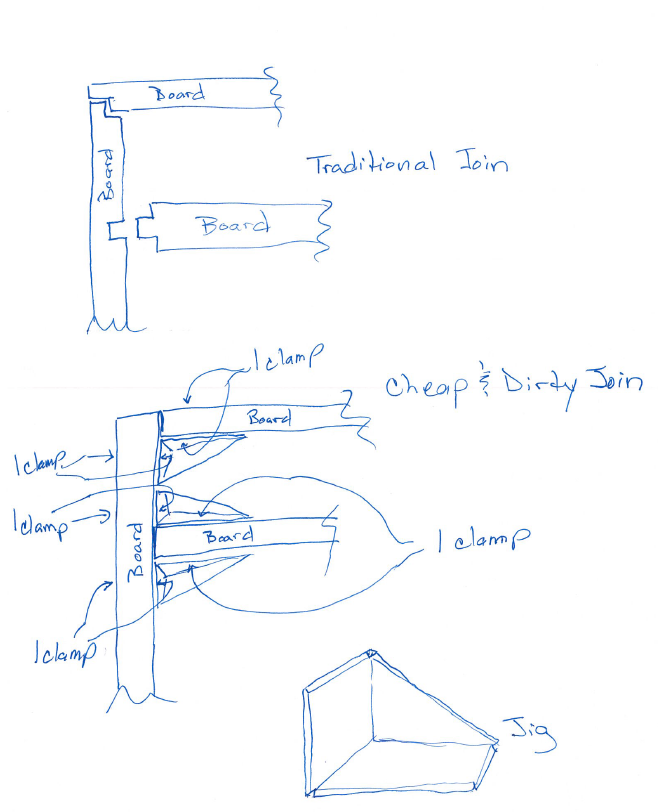 While a weak join, all the pieces will be supported on at least two sides by walls, plus there are three pieces total that interlock for even more stability. The question still remained how to hold them in place while securing the join (16-ga nailer.) Note these are 12 & 16-inch wide boards. Also, note each piece has at least three horizontal and two vertical components. I decided a triangular jig should work with clamps in the indicated positions. I would like to say they were a resounding success, but for a variety of reasons (not my fault this time) I am still waiting to do final assembly.