Yesterday, at some point, my glow forge decided that it didn’t want to exhaust fumes through the post on the back.

I do have an exhaust fan hooked up in line with the exhaust vent and it seems to be working jut fine. I can feel air going past my hand when I put my hand to the vent line that would be connected to the glow forge.

The smoke seems to just push straight out of the front of the machine. I used blue painters tape to seal the portions where smoke was bellowing out. All that seems to happen is the smoke then leaks out from a different location.

Prior to putting blue painters tape on the seams I could feel what felt like a fan pushing the air out.

I have also cleaned the ‘grate’ on the back. Doesn’t really seem to be much of a grate. Is there a mesh some place that I am missing?

I have also cleaned out the gap between the bottom gate and the frame thinking that something was lodged int here causing a problem.

What else am I missing?

Let me add a little more here. I took a can of air and tried blowing out the exhaust fan from the inside of the machine. The blades don’t move when I do this but the exhaust tube does move, indicating that air is flowing.

Search "glowforge smoking’. Lots of info on this.

Were you doing an engrave close to the bottom edge of the bed closest to you?

I will look a little more but I have been looking at those since yesterday.

Yes, but it doesn’t seem to matter where the cutting is happening now, the smoke seems to just come out of all the edges of the glowforge.

then there is a blockage in the system somewhere, or your rear fan is dirty and not efficiently moving air. The reason i asked about where on the bed the cut was is that the air assist fan under the head can sometimes push smoke out the front if there is an engrave close to the front edge of the bed. But that is usually a symptom of an issue in the exhaust system.

The machine should be under negative pressure when everything is working correctly so if the air inlet is clear and the exhaust fan is running and clear then you have some other restriction in the exhaust hose. Are you using a filter?

Not using a filter. I have used a shop vac and an old took brush to try and clean the vent grate on the back. I didn’t really clean the fan per se. Do I need to do something special to get at the fan? I saw a post about pipe cleaners, is that what needs to be done here?

I understand the negative pressure thing. I did the tape to see if it was just a laser head fan issue or something else.

There is a cleaning routine on here somewhere for the fan. I haven’t cleaned mine yet but it looks like it can be a bit of a challenge to get to.

Check the air intake (bottom right front) to make sure it’s not blocked with a piece of paper or something. And take off the tape. Those air spaces are there for a reason – it needs the air flow from them!

The purpose of the painters tape was to see if blocking where I saw it come out if that would change anything. The short answer is no. I didn’t block all of the air spaces on the glowforge.

If the front vent is blocked, it would only serve to create more hazard in operating your machine. I just think it’s a dangerous thing to try.

I own a P100 respirator. When the smoke issue started happening I would wear that when trying things out. I think I am ok on this one.

The ultimate reason I tried this was to see if I reduced the amount of space that air could come in, would I start to see the negative pressure happen again. The thought here was that the fan was starting to have problems and to reduce the amount of area that it could draw air from should show me that air is flowing outbound.

Ultimately I didn’t exactly see what I was expecting but I saw some.

Are you sure that the exhaust fan is running when you are cutting? Does the hose move? Mine always kind of straightens out due to the very high fan effort. I find it odd that the fan does not spin when you blow canned air at it.

make sure you didn’t accidentally turn off the exhaust fan. The filter switch should be off, as shown below: 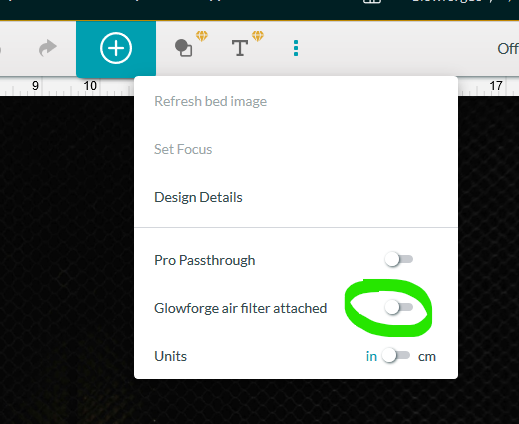 I was actually more worried about your machine…figured you were smart enough not to breathe the smoke.

Using the shop vac to clean the back off, the fan did move. So the fan has not seized up. Let me see if the fan is turning on during a Power 1 carve.

The setting for the Glowforge air filter attached is set to off. Everything looks OK there.

I was worried for a second that I had made a really silly mistake some how or that the wife had flipped it for some reason.

If you added your own external inline fan, the “glowforge air filter” switch should be on (to the right).

Pictures/video of your setup or the leaking smoke would help diagnose.