Been a little MIA from the forums because of the Christmas crush. Most of the projects we have been working on are not laserable, but did get hit for some cutting boards. And of course I said to being able to do custom engravings, it’s a nice lil up sell… The star trek one is a gift not sale, but the rest were nice lil gas money sales.

It’s nice to be able to just have someone type out the text and font they want in a word document, and then pretty much with inkscape drop it on to a cutting board. 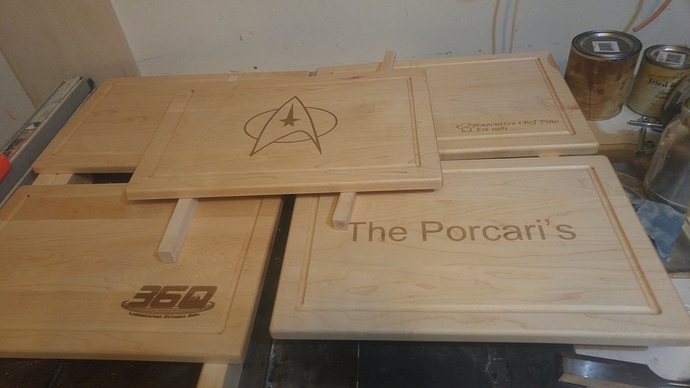 Thank you for the photos and the comments Jordan…Nice Work…!

I’ve been hesitating to do a cutting board of my own because I’m not entirely clear on whether people are using these decoratively or actually preparing food on them. And if so, how are you sealing them? I assume a deep engrave would be an issue there.

I use either the original or Danish. No one has died yet

. The engrave is about a mil or less, so shouldn’t interfere with cutting to much. Also wood retains its natural anti bacterial properties after processing. Glue is Eva which is non toxic. You can get cutting board formulas( titebond 1 is general, titebond 2 I think is cutting board).

Maple is classic and non toxic. Walnut is technically toxic, but so little leeches it is food safe and widely used.

What other concerns do you have?

It’s nice to be able to just have someone type out the text and font they want in a word document, and then pretty much with inkscape drop it on to a cutting board.

@chris1, engraving one side gives a nice piece of ‘kitchen art’ for display, and the other side for use.

I always just mention to people to use the other side for actual food prep and when not in use, display the side with the engraving.

Laser and software did the heavy lifting. Better then breaking out wood burning tools.

The woodworking is easy when you have a thickness sander

If it is a large cutting board (like these appear to be), you could just do an engrave in the corner or on one side. Then, there would still be plenty of food prep area that doesn’t have the engraving. I’ve done that some (outsourced the lasering since my GF is not here yet.)

Thanks, that (and using other side) basically answers it. I was concerned about soot residue, being able to seal it against liquids, and preventing gunk and bacteria from accumulating in the grooves. I know nothing about wood finishing.

And if so, how are you sealing them?

I use a butcher block conditioner mix for my boards. You can get commercial ones from Amazon or Home Depot even