I like this idea and will most likely use it once mine shows up. I will wait to build it till it does, just incase things change on the GF.

Not likely. Dan’s said the hardware is pretty much locked down. Unless some regulatory body tells them they have to change, the machine is what the machine is going to be.

Great project, and thanks for sharing. I’m going to be running mine with a sleeping baby around, so the noise baffling will make a big difference for us.

I would suggest for you to not dampen the noise and use your GF as a white noise machine to lull the little one.

Great excuse to do more cutting. “Uh-oh, the baby is crying–I have to go play with the Glowforge!”

That’s my plan! I was hoping the Glowforge would get here earlier so the little one could get used to the sound in the womb.

Not to derail the topic, but how are things going? You’re in the home stretch now (as are we)!

Yeah, a Glowforge would have been AWESOME to have around for the baby shower. Other than that, I’m great! I have 4-ish weeks left. Feeling healthy, and baby’s strong enough to kick a blanket off my belly. Little guy is going to be very small for an American baby according to our last ultrasound, but seems to be 100% healthy. (My partner, The Jerome, is 5’7" in shoes and was born at 6 lbs, full term, so no surprise there). I’m just hoping we don’t have a blizzard going when we’re on our way to the birth center during labor. I imagine the combination of Boston weather AND traffic isn’t something you and your Ms. are looking forward to either.

). Yea, she has kicked my wife’s phone several times now when she rests it on her belly. On the up side, I’m pretty sure I got her to fist bump me through the womb! I probably should be more concerned about weather, but what I’m actually worried about is parking. We’re at Mass General, right in Downtown Boston. And my wife has already unequivocally stated that we are NOT taking the T to the hospital.

To bring this back on topic and away from baby talk, awesome design! Staggering the holes should help. Another option is to increase the number of opening and decrease there size.

Have you built this yet? How much does it help?

Great post! As I wait for my GF I have been trying to design and build a table for it. I’m a bit frustrated because I haven’t been able to find out how the exhaust filter is attached or how much room it needs. So, I have question for you guys who have the prerelease units. How would you design the ideal table for the GF Pro and exhaust filter? Would you include some storage for accessories and/or materials? How best would you incorporate the sound damper? Any suggestions, measurements etc. would be greatly appreciated.

You actually make me want to build a whole cabinet for my laser now! ha.

I would want to build material drawers into mine for sure. So many scraps pile up around the laser, its handy to have a place to put them. I would use the same design for the sound dampener, but instead having it open at the top back behind the unit, I would have it open downwards behind the drawers to pull air and trap the sound even more.

your best bet for a router would be to have a cover for it.

This looks great! Do you plan to post a model or dimensions? Did you ever get pictures of yours?

In the process of building a pre exhaust filter for the gf to sit on. Where did this project land? Any pictures? Also curious of pictures of the bottom of the gf

Here is a pic @karaelena posted. 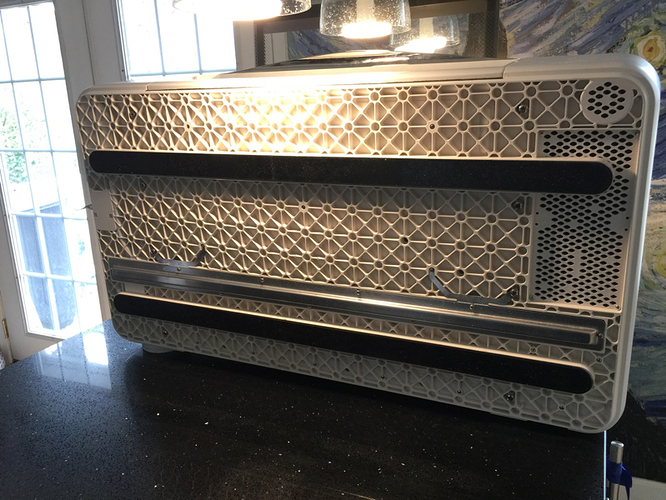 I do not have my GF yet, but I’m hoping this week. I’m curious, is there any air intake from the bottom? do the support beams sit down a little so the base is touching the frame of the GF? the cutouts mentioned for airflow, is this between chambers, or to the outside as well? I can’t tell from the picture. Any assistance is appreciated and thanks for this cool project!

Yes, air intake through that perforated rectangular grid on the the right side of the machine. You don’t want to block it.

On that note, it’s a pretty powerful draft. After a few days of wondering what that weird fluttering sound is every time I use the Glowforge, I finally dug around and found a piece of bubble wrap that must have come out of some packaging I opened nearby and gotten sucked under the machine. Since then I have to keep reminding myself not to put anything down next to it.

the design is deeper than the glowforge, so all the air intake would come from the back of the box, You can enclose the top and open up the back section of the bottom if that helps noise distribution in your room.

hey @takitus, did you ever get to take some pics of the muffler box you built? would love to see. since the feet raises the glowforge a bit off the table, does the sound still escape through the gap between the muffler box and the glowforge? does make a difference if the inner supports were inset/sunken? or is the box’s chambers enough to deaden the sound? thanks!