I am fairly new at this whole Glowforge thing, and looking for some feedback on lasering slate. When I etch wider areas of slate, I’m getting spots on the heated areas, as seen in the sky on the attached picture, and I’m not sure why. I have settings at 950/30/340. Has anyone else run into this and determined the cause / found a solution? All help is greatly appreciated! 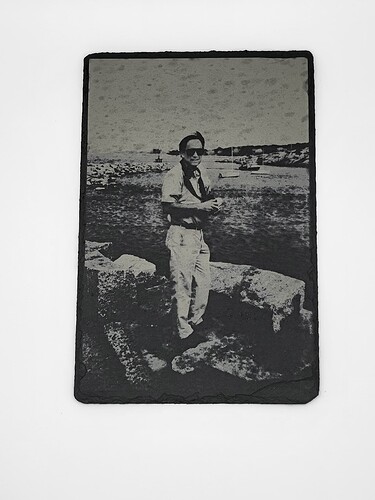 I forgot to mention, I did use a light coat of mineral oil, however it has been dry for about a week now.

Slate is very fine-grained, and usually pretty homoginious. More likely I think the mineral oil being ‘re-absorbed’ into the engraving from beneath. You might try oiling after the engraving (I’m assuming you treated it with the oil first).

Thanks for the reply! That certainly makes sense. I will have to play with it and find the right solution for what I’m looking for. I will give oiling post laser a shot, and also see if i can make due with a lighter oil pre laser. I just want to try to keep the contrast as high as possible, as the oil on lasered slate will darken. Fingers crossed!

Nice job on converting the photo to etching! Looks great!
Hope the oiling post etching helps even the sky out–but slate is natural, and can vary with any given piece pending how it was formed, but indeed a lot more homogenous than granite, certainly, but the stippling/spotting may just be a “feature” of the amazing process & ability we have to etch on natural slate!

Can you upload the photo you used? It might be imperfections in the photo, There are tricks that you can use to find out.

Thank you! Photoshop helped. Yes, I think it may be a combination of excess oil as PrintToLaser suggested, and “features” of the stone as you say. I tried a second piece to see if that helped, and it did help with the sky but made the face too dark for similar reasons. Moving in the right direction though. Thanks for your reply!

Certainly! I don’t believe it is the picture as I printed as second one and the sky is fine, but the face is dark on that one. You never know though, and worth the input! Thanks! 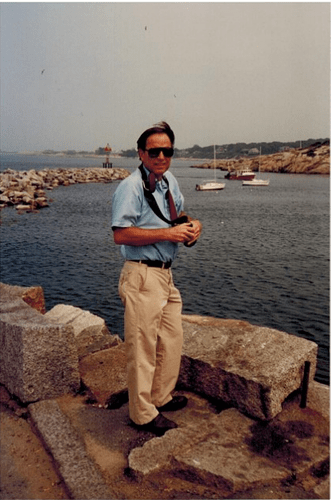 Also, those visible spots in the sky are birds. I originally thought it was dirt on the negative but took a closer look.

TL;DR: Looks like it’s not noise in the source image.

Longer: I went in to GIMP and fooled with the saturation and curves to try to isolate any noise in the sky, it went like this: 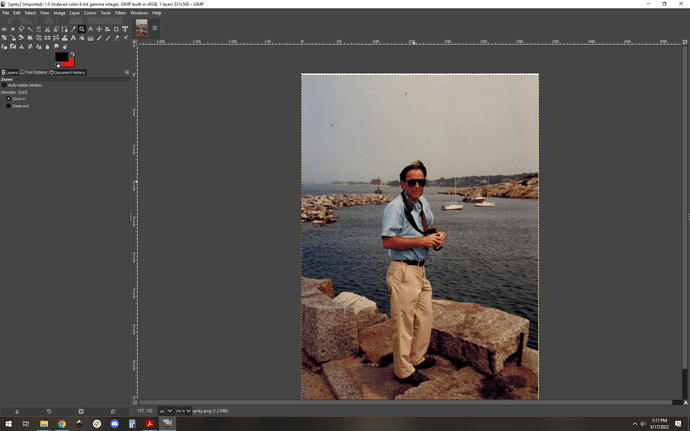 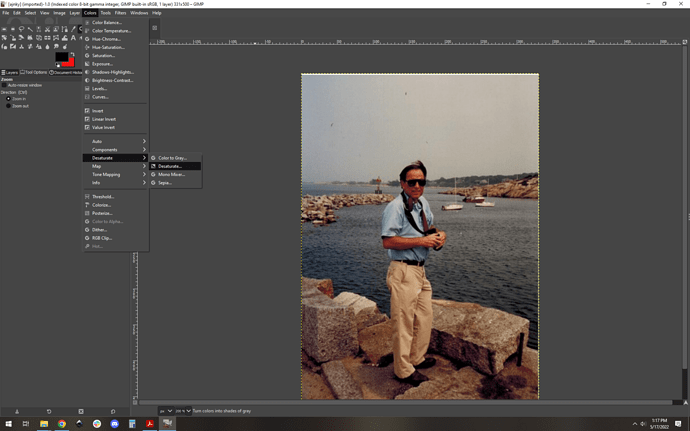 Gets you this BW version: 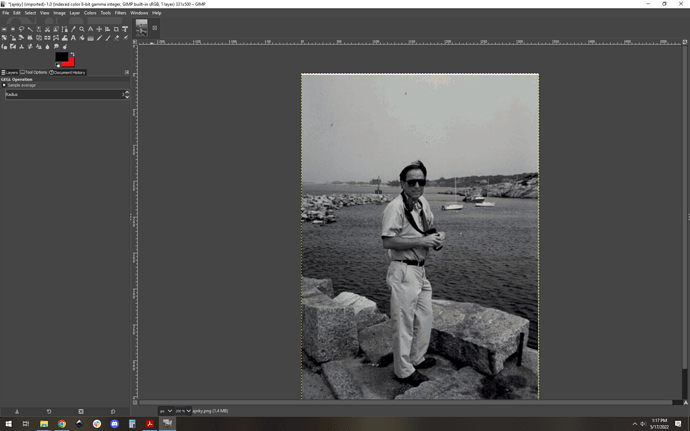 Using a curve to severely emphasize subtle differences in the highlights (aka the sky in this pic): 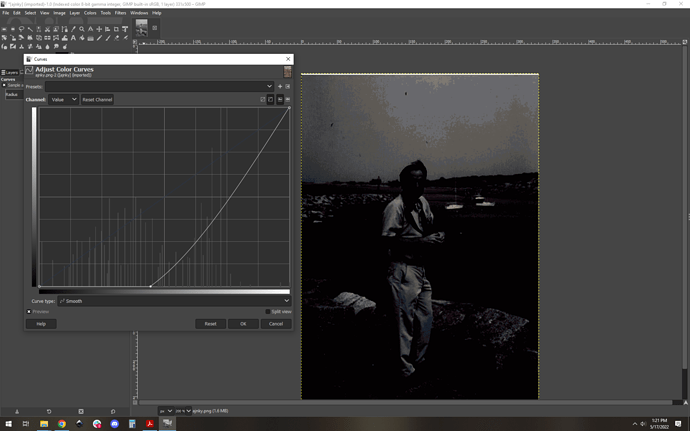 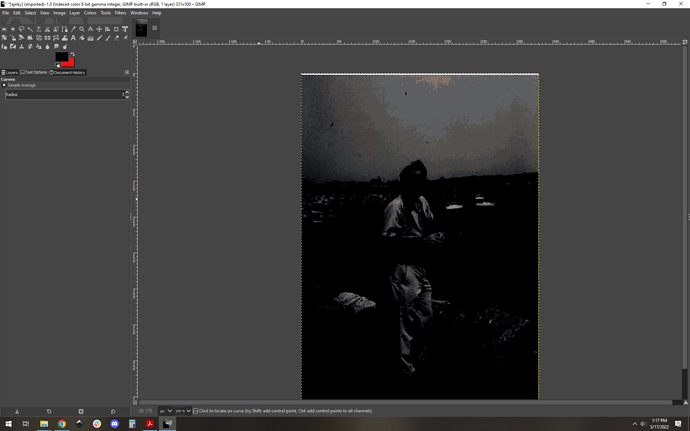 There is definitely subtle noise in the photo (really more like typical noisy jpeg posterization), but it doesn’t match the pattern of spots in your final result so that’s not the cause. I’m thinking variation in the slate.

i’m not sold the noise in the photo is causing those splotches in the engrave, but there’s definitely noise in the sky.

So you can see there’s definitely a lot of noise in the sky, but it’s not quite in the same pattern as the slate engrave.

i’m not sold the noise

Yeah pretty much confirms my curve work. The noise in the engrave is severe enough that I think we’d both have seen it clearly after the curve process.

there’s also a question of resolution. I don’t know if what was posted here is the original, but if it is, it’s very low res, which can exacerbate issues like this. the image posted above is 331x500, which is small for engraving anything bigger than a couple of inches tall. if you’re engraving at 340dpi, an image at this resolution should be 0.974" x 1.471".

Thanks for all the feedback! This is not the original, but a screenshot of the original. The original file was sent to me with excessive white background and would have made it more difficult to see here in the post (I’m apparently too lazy to properly crop it for you all). I didnt see any extreme noise when I was converting it in photoshop, but then again I wasn’t looking for it at the time. I am leaning towards the oil as the issue, likely “pooling” in variations in the slate. Thanks again everyone! I will be doing one more (hopefully final) print tonight to see if this fixes things. I will post the image if and when I find success!

“pooling” in variations in the slate.

That’s my first thought - that doesn’t mean that it has any relationship with reality.

So you can see there’s definitely a lot of noise in the sky, but it’s not quite in the same pattern as the slate engrave.

Those look like birds to me, not noise in the image. Although the birds themselves could be seagulls, which would likely be a lot of noise.

not noise in the image

That’s not what @shop and I are talking about. Here’s an even tighter crop of his sky image: 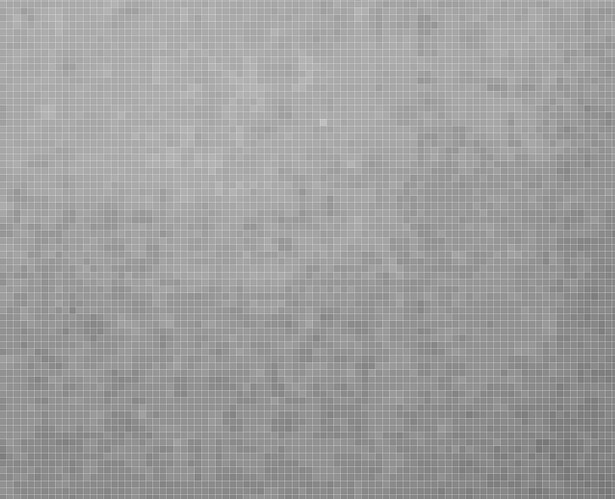 And then the contrast emphasized even more: 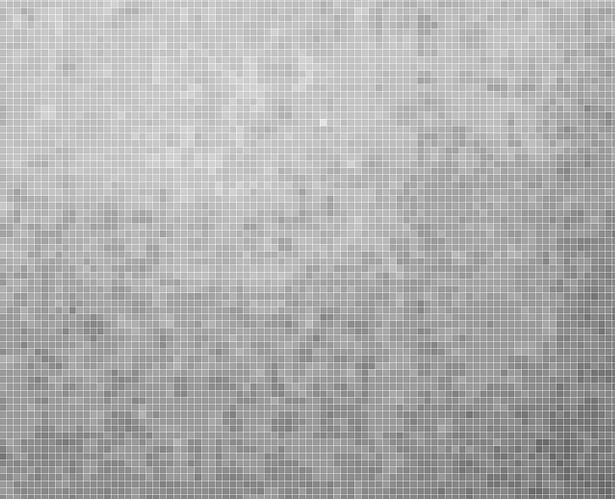 You can see that it’s got lots of subtle variation, that’s the noise we are talking about. If that pattern had matched the pattern of defects in the slate we’d have our culprit. It doesn’t match so we know the noise isn’t the cause.

Every digital photo/scan has some level of noise, it’s just a question of how much.[1] You can minimize it with post processing but in this case it’s not too bad. It was just good practice to rule it out as the cause.