So this year has been a banner year for squirrels in our neighborhood and for administrative workflow issues in my wife’s practice. So figuring I could kill 2 birds with one stone, I decided to make a stamp she needed. A few weeks back I had made it in Inventables Linoleum, which while it looked great, absolutely sucked as a stamp (didn’t actually take up ink and put into paper - sort of a fundamental task for a stamp) so saw the recent post about Art stamp from @cynd11

Pre Release | Art Stamp Laser Polymer Made on a Glowforge

It was a busy day at the 'forge today. We had breakfast guests and I wanted to demo my GF. They were all rolling eyes and “oh boy, she’s got another geek toy, we’ll humor her.” Everybody trooped downstairs after breakfast and they saw my samples and saw the possibilities. Starting to get excited. Then we whipped out a few quick items (a duplicate of the parametric box from @mpipes; a custom cake topper for a 40th birthday my sister was making a cake for). That’s when they really got it. I…

And decided well that stuff probably works well since that’s its purpose in life. So I ordered a few sheets, and layered away.

Now the primary problem is man does this stuff smoke (this stuff does have a backing sheet but no top masking). see this video.


Any squirrels in my back yard not wearing a SCBA are all now dead… The plume of nasty smelly smoke was impressive. And they aren’t kidding to immediately take it and wash it after cutting with soap and water. The oily gunk was nasty.

Then I needed to make a backing for it. Initially was going to make a 3D printed one since this stuff isn’t mounted, but my filament broke for some reason while printing, so not wanting to restart, figured heck, can’t be that hard to make one on the Glowforge. So

Maple ply and 15 minutes in OnShape and we had all the nice laser joints done. Exported as DXF and imported into AI. Glued with CA glue: 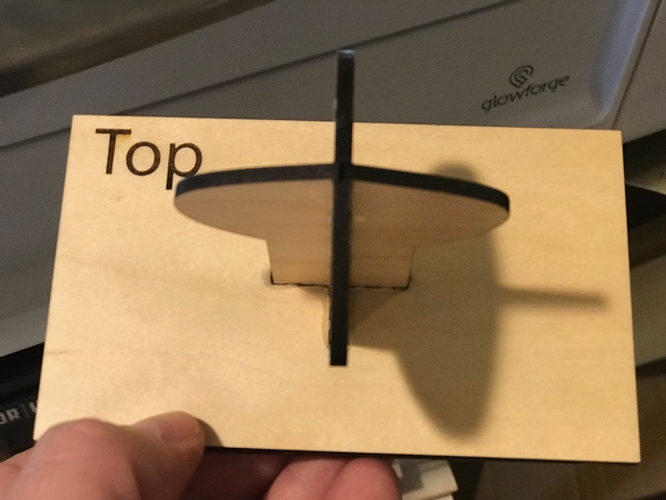 Then I decided it needed a small easter egg on i (sorry didn’t photograph well, it looks nice in person): 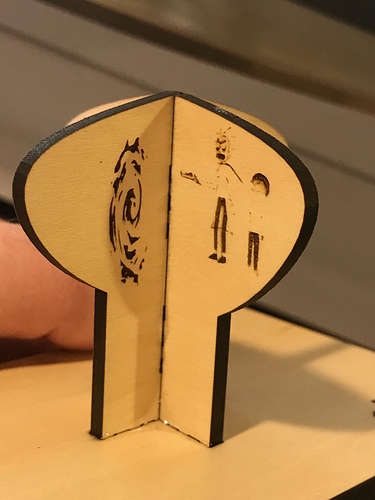 The “Top” engrave is so you know how to orient it when stamping. Then I adhered the rubber stamp part to the wood with the adhesive backing on the polymer sheet: 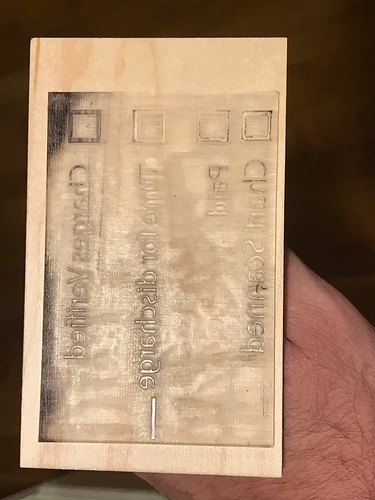 Seems to work much better at actually stamping ink onto paper!

22 Likes
Can I make my own rubber stamps OR NOT
Trying to make a rubber stamp
Laser safe PVC or rubber?
Tutorial: How to cut without the Crumb Tray (Honeycomb)
Jules February 18, 2018, 3:27am #2

And you reversed the text!

(No badge for you this time.)

I could kill 2 birds with one stone

If you could do that with squirrels, you wouldn’t be having these problems.

So glad it worked out for you!

Actually, the value of the clear stamps is that you can see what you are stamping as long as you mount it on a clear block, which you can easily make from the Thick Acrylic. Just peel that stiff backing piece off of the clear stamp, and the stamp will stick to the acrylic.

If you could do that with squirrels, you wouldn’t be having these problems.

We actually have a huge hawk that lives in the trees behind the house, and he (or she) keeps the population a bit in check.