So I was inspired by the following:

Taking a little from each of them, I came up with this…

I found a schematic type image of the walker. Pulled the image into Inkscape and, essentially, recreated the image in vector form. I could have had Inkscape do its best at finding that for me, but I wanted nice straight lines. The body is scored on both sides. The diagonal mark in the middle of the body is a tiny bit of charred paper I didn’t get cleaned off.

I did NOT expect all of the detail to come through. I put a lot of those lines very close together. The precision of a Glowforge is mind boggling.

I made one for a friend of mine and made a couple of extras to go along with it.

WalkerHolder.jpg1000×419 89.2 KB
Storage trays for the pieces, made from cardboard with a piece of cardstock glued to the back.

I realized later that if I had just laid the original cut in that configuration, I could have used the scrap as the tray. Live and learn.

Finally, he’ll need some way to keep them together, so taking some inspiration from My First Paper Experiments - Exciting!, I created a cardstock box. 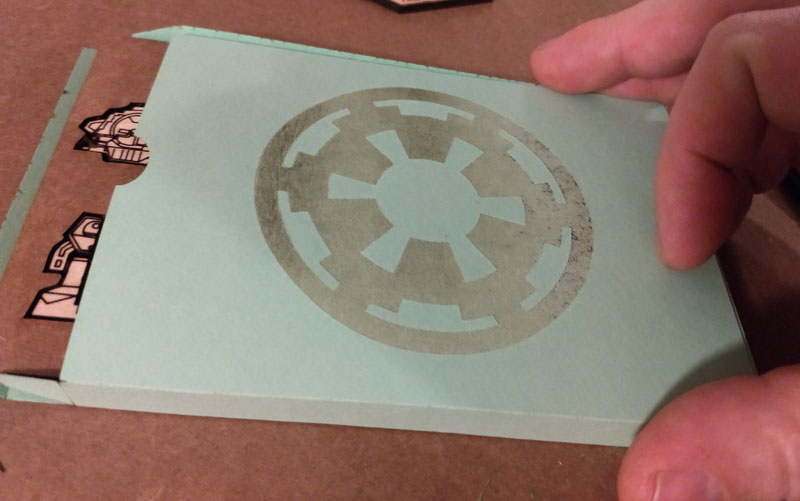 WalkerBox.jpg800×501 50.9 KB
I’m holding it for the picture because I haven’t glued it up yet. It came out pretty nice. The Empire logo is almost transparent. I made a parametric sketch in Fusion 360 so I can make these for any sized object. The logo was engraved after the box cut using the power specs listed in the above link.

I love being able to make things I could only dream of a month ago.

Never seen that before - totally cool!

I, for realz, started giggling at that!

This is friggin awesome! Really cute idea and execution.

Those are really awesome! My son would love those!!

That is just so darn cute! Great design and execution.

fantastic design and execution. What a gift!

That got a literal lol. Awesome inspiration.

The antlers are what really makes this awesome! Well done.

To be honest, I giggled more than once while putting it together. Lol

Love it! And the storage trays you made are really great!

I’m starting to do this for everything that has multiple parts. I’m making a small nativity scene for a coworker and designed it with the parts arranged in a manner where I just slap a box around everything and the GF cuts a tray as the last step. Love this tool!

Oooh I’m stealing the cardboard storage idea for the elegant reindeer as I’m making a few as presents and was just going to throw them in an envelope. Thanks for sharing!

I was thinking of doing the same, but they fit so tightly that I’m not sure they’ll get stored dismantled. I had to put considerable pressure on mine to get the front legs on.

But, yeah, steal away! Hehe

Good point. I’ll be making mine out of 1/8" Baltic and the first set turned out pretty good. I’ll run another test set first before knocking out a bunch. A quick scale adjustment to the deer will fix it if they’re too tight.

Yep. That was my first run with the deer. I actually like the tight fit. No reassembling if the table gets bumped.

This is wonderful! The cardstock box makes for a very gift-worthy gift.