I am Very excited that our district just bought us 6 Glowforge Pro printers for six of our middle schools. They should arrive next week. Any suggestions on good projects for the laser cutter? I plan on having them design a glider, but beyond that I can’t think of anything. Maybe ornaments or coasters.?

I get a decent amount of “practice” in arithmetic and basic algebra by making tabbed boxes, especially ones with dividers, and they can get artistic for the outsides, too.

I heard about a class project in a local middle school to make a working clock, where each student was responsible for making one part, and the group had to design all the parts and make them fit together to make the clock. That might be a little complicated for newbies, but you could probably adapt the idea to a simpler project, like designing and cutting a set of planetary gears or something.

Board game?
Lots of assets to design for a collaborative final product with no mechanically interacting parts

I would think the art department would love it, assuming your district didn’t budget cut it away. You have to watch the paper flaring up, but between paper, wood products, felt and found objects, it should be great.

In my physics program at college, one of the first things they did was take us to the machine shop - I don’t think we ever used it the first year, but it was made clear sometimes you have to build your own equipment. It may be too early, or maybe not, but basic Newtonian mechanics and trebuchets go together like apple trees and gravity. There should be plenty of trebuchet plans online. I’m old and so is my memory, so maybe force applied to trigonometry is too advanced for middle school?

They would be great in a shop class, but iirc that didn’t start until eight or ninth grade.

When they get good enough have them create living hinge or fitted boxes pencil holder and picture frames. Cell phone holder. Keychains

Things that kids would use or proudly talk about to peers. My kids keep making badge pins and keychains and they are conversation pieces

but basic Newtonian mechanics and trebuchets go together like apple trees and gravity. There should be plenty of trebuchet plans online

LOL. I have a demo trebuchet that was one of my first laser projects. I tell all my students that they haven’t truly broken in a new tool until they’ve been used to build a weapon of mass destruction

This is a project from my makerspace. The kids drew the artwork and then engraved it, but they could probably do the whole thing with some help. Or some variation of it. https://www.facebook.com/LowellMakes/posts/1475969952512920

They could also do simple maps, houses, plaques for sports teams or theater banquets, Mother’s & Father’s Day cards (out of whatever)…

My middle school daughter was just able to create a coaster from a white tile. She downloaded an image off of the internet and used the glow forge. Then she used a sharpie marker to color in the image. One tile at Home depot was less than a quarter. Super cheap, super fun. Great project for an “intro” to the glowforge. You could even have the kids draw their own picture.

She made two, one was a picture of Bob Ross where she added the words “There are no mistakes only happy accidents”. Gave it to her art teacher as an end of the year gift. The second was a picture of a character from a video game.

Didn’t anyone else think this is the greatest school district EVER!? Kudos to the Board and whoever realized that $500 3D printers aren’t everything a maker lab needs. Go you!

I’m not kidding. You hit those marks, you’ve hit them all.

gears!
help remind kids that mechanical engineering is fun, cool, and that math goes way beyond numbers on a worksheet.
(I sure wish my middle school teachers had shown how geometry/engineering = faster race trucks with better suspension. instead of “more efficient bus routes and toothpick bridges”) 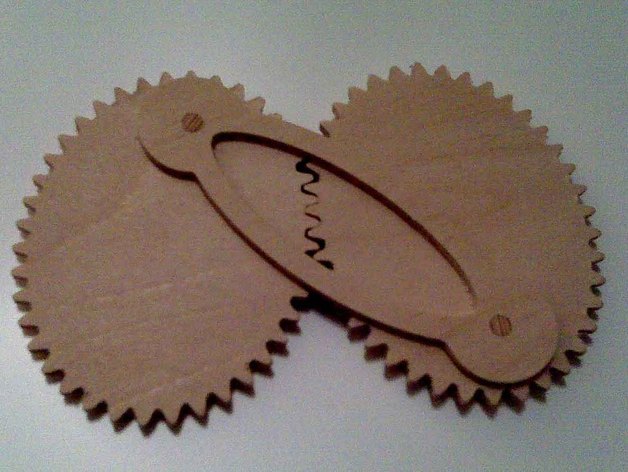 Those Nautilus gears have always been a favorite. (I should redo them in wood or acrylic instead of filament.)

Blockquote[quote=“scott5, post:9, topic:26470, full:true”]
Didn’t anyone else think this is the greatest school district EVER!? Kudos to the Board and whoever realized that $500 3D printers aren’t everything a maker lab needs. Go you!
[/quote]

Our district got a grant. First year was for high school, second was middle school, third was a little for both. Laser cutters were on the equipment list, and when I started doing research I stumbled upon GF . I had to wait for them to accept PO’s, in ththe mean time I convinced the other schools to go with GF too.

I now have 7 3D printer, yes seven. VEX and Linkbot robots, and my Glowforge. That should keep them busy.

Actually, you might find the Glowforge outstripping the 3D printers in popularity and usage. (Speed factor.)

Seem to recall giving a rather lengthy opine to the folks at an excellent 3D printer manufacturer about that a few years ago.

So you might want to pick up another one for each school with the next grant.

Now that you’ve had the Glowforges at school for some time, can you share any advice on the logistics of training and safety? We recently received a Glowforge at my school and I’m not sure where to start in terms of training teachers / students to use it safely. Any suggestions?

Kimberly - That’s my question too! We have a GF and love it, but I’m trying to figure out how to 1, design, then 2, cut on the GF with a class of 25 students. I love our GF, but it’s not feasible to have them all standing around waiting for their turn to cut their project. Any suggestions?

I’d also like to know what software people are using for their designs?
Thanks!

We have a class set of Chromebooks, so we’ve been designing in Sketch.IO and then converting the design to SVG through PNG to SVG. It’s definitely not the most efficient way to design, and we have had to troubleshoot some designs that didn’t ‘translate’ well, but we don’t have a computer lab or classroom desktops. If we did, I’d be installing Inskcape onto them and using that. I’m hoping to have a few in my classroom next year for that purpose.

When it comes time to actually use the Glowforge, I have the students submit their designs to me so I have all the files. We use Google Classroom and that’s worked well for file management. Then I upload the files to my Glowforge UI and we start cutting. The only project I’ve done with student designs so far is paper stencils for spray painted art, so each stencil took ~60 seconds to cut. While the student designer and I watch it cut, everyone else works on an independent assignment so they’re not just sitting around. That way everyone gets a turn pressing the ‘magic button’ and if there’s an issue with the design, they can just turn around and fix it while I work with a few more students, and then we try again. But having an assignment for my class to work on is key for the management of it all. I teach English and History, so either independent reading or working on an essay are easy go-to’s.

Next year, I would like to do some more substantial projects that will involve longer cut times, so I may plan the project around groups of students working on making something instead of each student having their own design so that I don’t have the problem of 25 students x 10 minute cut = 4-5 hours of 'forge time for one iteration.

The other software I’ve used so far besides Inkscape is Affinity Designer, which I also like. I may purchase it next time they have a sale for my personal use, but I will probably stick with Inkscape at this time for school use because it’s free.