My son is older than the recommended age range, and his concept of balance is fine. But I had him make the project from start to finish to get him more familiar with computer skills he hasn’t had to use yet, from downloading the zip file, extracting them, and uploading them into the GFUI. Then he loaded the materials, cut them, and assembled them according to the lesson plan I had him print out. He had fun. The counterweights were helpful because even though it was all cut from the same piece of draftboard, the scale was not balanced. Not quite sure why, but the paper clips he used were different thickness, so that could add to the unbalanced nature of it.

I would like him to do the robot one, but we don’t have all the electronics needed. Hopefully the next projects don’t require outside hardware. 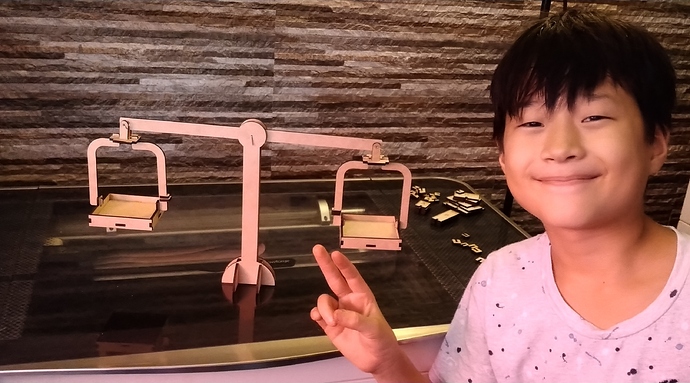 Looks like he did a great job on the scales. Might be a problem of friction on the 3 areas that have to rotate. I bet we see a lot more cool things that he builds. I am sure you are proud of him.

I figured it was something to do with friction, because it varied depending on how we physically positioned it. If it were regular wood and not draftboard I would put some butcher block oil on it, but if he wants, he can use my tailor’s chalk to wax it up. I like how Glowforge is providing summer activities this week. Even if it’s below age level, it’s a good opportunity for him to learn basic computer skills.

I had him make the project from start to finish to get him more familiar with computer skills he hasn’t had to use yet, from downloading the zip file, extracting them, and uploading them into the GFUI. Then he loaded the materials, cut them, and assembled them according to the lesson plan I had him print out.

Excellent - except you will soon be in competition for machine time.

Not gonna lie, I’ve really been wanting someone beside me using this. But I’ve had it for a year and a half and I’m the only one who’s touched it…lots of pressure on me to do something useful with it to justify the cost

My son takes classes at a maker space, and I think compared to the other cool stuff he’s done, laser cutting isn’t super high on his favorites list. He actually asked for a welder. He liked welding the best so far. This week they are having make-up lessons (his class was cut short with the stay at home order). He’ll be welding a sculpture and making a skateboard…so I think compared to that, he still won’t be interested in my laser. Let’s hope the next few projects Glowforge sends are cool…I lost my email so I can’t even remember what to expect.

I feel quite sure you have made something that pleased you, that’s all I was looking for.
I bought this thing as a new dimension in art, purely personal indulgement without any expectation of it paying for itself - because I had no idea what I was doing anyway!

. It has paid for itself without me soliciting anything (my Daughter did), so don’t give up on it yet!

In retrospect, it probably paid for itself again when I “Etsy’d up her wedding” at her request/requirement.

I bought it to cut leather for kendo gear, but after so many years of kendo, we decided last year we (my son competed heavily, but I was involved in the other aspects of being a sport parent in a sport short of volunteers) needed to take a break from practice and tournaments; so then I had to think of something else to use it for. I never actually used it to cut anything for kendo, though I did make some really nice leather passport wallets for when we went to Malaysia and Japan last summer

I think my problem is the glowforge is too versatile. I find myself jumping everywhere with it, and although I’m having a blast, when someone asks me what can I make, I give them that vague answer of what do you want?

It’s like a restaurant menu with too many options, everything sounds good and I can’t think of one thing I want to commit to ordering. I just can’t narrow down the coolness of all the possible projects…and I don’t want to narrow it down, I just want it to stay busy so I feel like I didn’t buy another tool that sits in the corner, that I might use someday (I have a silhouette curio that sits and does nothing… All because I wanted to etch metal-which I still have yet to do after all these months, despite having everything to try it)

My husband is right, I just have a machinery collecting addiction. I’m lucky we have a small house, otherwise who knows what else I’d try to pack in here.

. I really want a car lift… And a CNC and plasma cutter… Tire and wheel balancer… Clean room for paint… Industrial sewing machines…

This is just awesome.

I think my problem is the glowforge is too versatile. I find myself jumping everywhere with it, and although I’m having a blast, when someone asks me what can I make, I give them that vague answer of what do you want?

It is bad that way. If you’re the least bit ADHD the thing is just magnet for causing flitting from one project or technique to another. I go through phases with things, make dozens of something and then move on to something else. It drives my wife crazy because we end up with 20 coasters & 2 glasses to put on them

Her friends think it’s great because they get all sorts of stuff but only in reasonable quantities so they don’t see all the things that we have excess of from me trying to make something as best as it can be made.

“I can do that

This is something I think and say all the time… Actually, I had to start saying it out loud because several times my husband confused my curiosity with how something is made with “I want that.” I had to start telling him I don’t really want this, I wanted to figure out how to make this, after he bought me several unnecessary items because he saw me looking at them for a long time. Usually they were items that I thought it would be crazy for someone to spend so much on, I could make it and sell it for cheaper

then I ended up with several of them.

the thing is just magnet for causing flitting from one project or technique to another. I go through phases with things, make dozens of something and then move on to something else.

You just described me to a ‘T’. Don’t know if I have ADHD, but I’m exactly this way.

The welder may have his interest, but the Glowforge will have it’s turn with his interest. Because it’s cool!

He actually asked for a welder. He liked welding the best so far.

Obviously needs a plasma cutter to go with the Glowforge

I had not considered there was another possibility. Like saying you want a laser to cut and engrave wood. 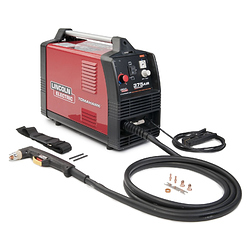 with a Hypertherm 45 plasma machine torch.

I would have thought that they would have been more expensive . Not bad.

I’ve obviously missed ‘Summer Camp’. Going to find it now. Your son did a great job!

We haven’t had a chance to work on the new summer camp projects, but only because my kids had make-up days at their makerspace. Yesterday and today, they worked on making this skateboard deck and putting the whole thing together… Plus some really weird welding sculpture…