It’s the last day of the month of February, and I haven’t seen the multiple posts complaining about there not being an official update post. The Compact Filter must have really soothed the complaints of the masses

I got mine and have yet to use it, only because my neighbors don’t care about the noise or smell, so I would rather use something that has a long lifetime versus something finite. If I get another machine, it will be connected to that one as i can use it to cut the stuff that doesn’t buildup as quickly.

I just got mine today after a 3 year wait only to find there is no crumb tray or hose in the 2 boxes they sent me. I got a power cord, the laser itself and the proofgrade pack.

Those come in a separate box. (If you don’t get it in the next couple days you might want to open a ticket.) Congrats!

Uh-oh! Definitely need to start a ticket then. (We used to get three boxes.)

Already done!
Lots of troubles with my order to date and I’m really hoping they will quickly turn this one around

We used to get three boxes.)

They consolidated the third box into the other two a year ago I think. The third small box was the head & the clamps & hose if I recall. Those are now in the other two with the machine & the tray boxes.

I dont know what all was in the 3 boxes originally but what I got was the glowforge, the laser head, lense tool in the big box and proofgrade materials and the power cord in box 2
The rest just didnt show up

In theory you can still play with your GF, just cut/engrave using the no crumb tray instructions

Got any 1.5" thick things you want to engrave? The tray is about 1.3 (close enough for now), so put something 1.5" thick in there and set the height to .2 and engrave away.

Biggest thing is I dont have the hose for venting. I know I can raise the stock up to the level of the laser but going out and buying new stuff just so I can get everything setup is kinda offputting right now where it was all supposed to be included.

I hear you there, but you won’t regret upgrading your exhaust hose one bit.

LEAKS, DRYER VENT PARTS and GF Everything Else

I have a multi-flap single louver, it works perfectly. Basically this style [though I got mine on amazon]: https://www.homedepot.com/p/Everbilt-4-in-x-8-ft-Louvered-Dryer-Vent-Kit-TD48PVKHD6/203626525 I also just upgraded (literally today) to an insulated exhaust hose, it is so much quieter now.

I got this hose: 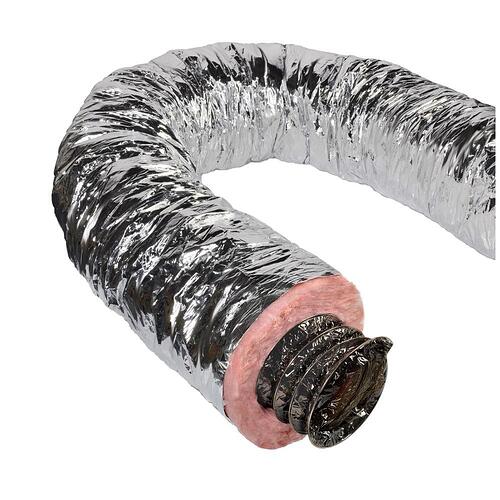 The Master Flow 4 in. x 25 ft. Insulated Flexible Duct R6 Silver Jacket is used in standard Heating and Air Conditioning (HVAC) systems and some venting applications. The duct has R6 insulation which contains 33% more insulation than the standard...

Oh, no. That’s the worst. The hose is a cheap fix, but the crumb tray is pretty important. Wonder how that managed to get left out. It’s really the primary item in that box!

The hose is really worth the upgrade, but in the meantime, it’s really just a $5 item at your local hardware store. Easiest thing to replace.

You will probably want to replace the hose anyway. Get a chunk of dust collector hose 4" dia. Much better than the cheap dryer type hose it comes with. And, use it without the tray until you get one. Just prop your projects up to within half an inch of the head and you’re good to go. My tray is 1.347" which should be typical? Anything propped up higher than that and less than 1.847 will work. Just remember to subtract the 1.347 from the total height when you enter the thickness of your material. Good luck and congrats.