When cutting acrylic, I’ve observed what looks a bit like chipping along the cut edges. It’s one of those things that once you see it, you can’t stop seeing it - so consider that before continuing with this post

Initially it seemed random, such that some edges were clean and others beset with ‘chips’: 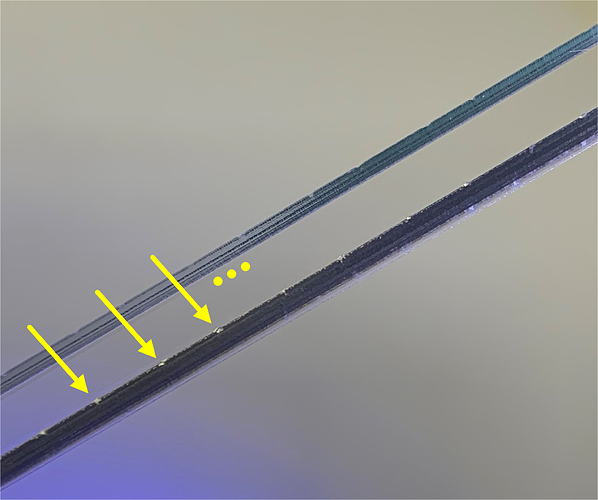 Root cause is the build tray. When the laser cuts through the acrylic and hits the metal grid of the build tray, some of the photons are reflected back up to the acrylic, creating ‘splash’ damage: 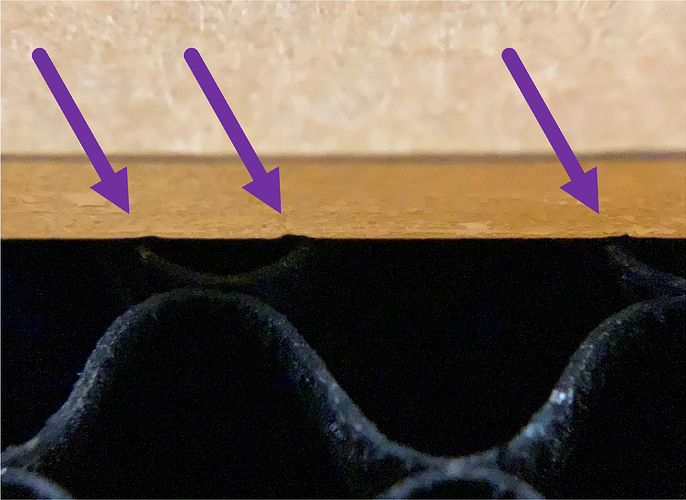 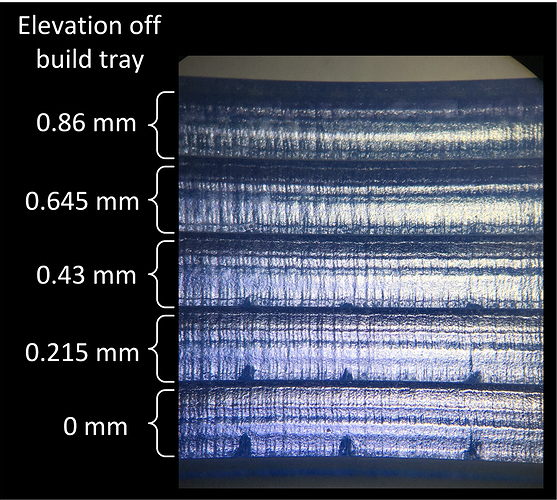 So whenever I want high-quality cut edges, I suspend the material at least 1 mm above the build platform. Alas, that’s a non-trivial complication to job setup, but the beautifully clean edges make it worthwhile.

I typically use cheap cardboard sheets to create suspension jigs for production runs. I’ve also used sheets of synthetic (polyester) felt as a sacrificial buffer layer - it shrinks back from the cut line as the laser passes through, so it doesn’t add any debris to the acrylic cut. I’m eager to hear any other suggestions for how to cheaply and conveniently elevate material before cutting…

It’s called “flashback”. Typically you avoid it by shielding the rear of your piece with enough masking (or other material) to absorb the excess laser energy. I tend to use heavy cardstock for most things.

A single piece of Amazon shipping box cardboard is .15mm and with Set Focus I no longer need to worry about fudging the thickness measurement. I’ll try that the next time I cut acrylic!

@evansd2, thanks for the keyword tip! I now see there’s lots of prior art on the topic.

I did try simply setting the acrylic on paper/cardboard to absorb the flashback. The problem I saw was the debris from the lasered paper/cardboard layer was redepositing and mixing with the just-cut acrylic, requiring more aggressive cleanup. Granted, it takes magnification to see it, but I’m one of those people 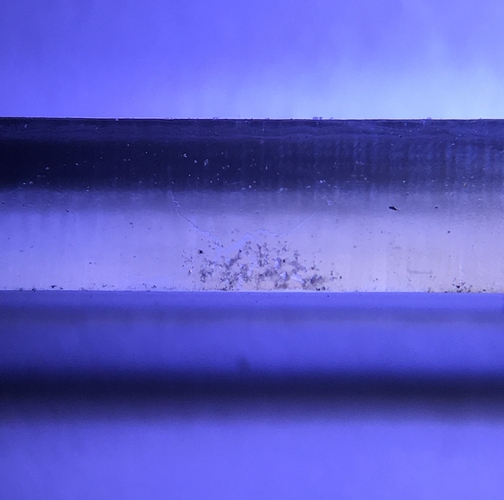 Having just air underneath the cut gave me the cleanest results with no post-processing.

when we got the universal at work, the tech who installed it recommended raising acrylic off the bed when cutting. he put four little 1/8" scraps in there.

generally speaking, if you nail the settings, the flashback can be fairly minimal. but there are definitely factors that can make nailing it every time (not just on the GF) an issue.

I was skeptical that I could fix this with settings - but I just tried running 2 passes at roughly 2x the standard Proofgrade speed, and wow, no flashback marks! Thanks for the suggestion!

Be aware of the layer danger inherent in cardboard when using it as a spacing material. You may get a fire in the cardboard that you can’t even see.

I second @ben1. The beam power and speed will very likely ignite the cardboard underneath, and if that in turn ignites the acrylic, well… That said, I did note that some solutions for flashback involved using highly flammable sacrificial layers in the beam path, which I shall not name here. 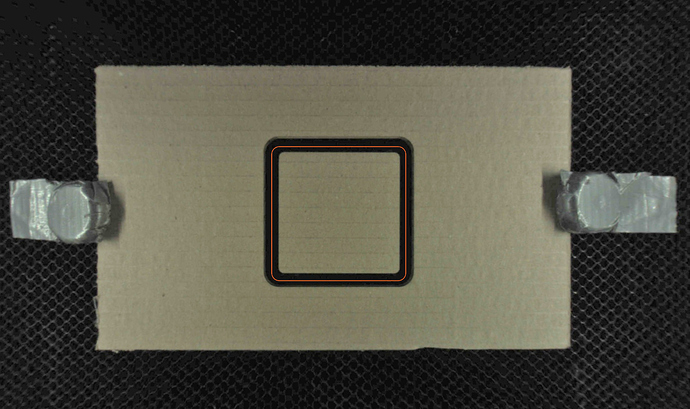 I’ve observed that some acrylics can produce a flame when cutting, so I still hover over the GF with a fire extinguisher nearby.

In my experience it is the masking that causes the flame and not the acrylic itself, unless the acrylic is less than about 0.02 inches thick. I rarely see burning occurring anywhere but where the masking is applied and catches fire. Acrylic does not usually burn in a self-sustaining way unless it is really thin. As soon as it gets thick it puts itself out.

Make sure you are using the proper fire extinguisher - a standard ABC will destroy your GF if you have to use it. A halotron will preserve as much of the system as possible.

Well yes, I will say in over a year of using my GF I’ve never had even the slightest flare up in cardboard

I had to check: I tried the same cut on some Brand “I” acrylic that uses a brown paper mask. With the mask on there’s a flame, and with the mask off there’s no flame. I’ve never seen a flame with Brand “G” acrylic, which is masked with a white paper that seems similar to TransferRite 582U.

Thank you @ben1 for pointing that out! I’ve stopped thinking that Brand I’s acrylic formulation was somehow more flammable - although I have observed it does cut with a smoother and glossier edge.

@deirdrebeth, same here - despite that I won’t step away when cutting.

I am glad you haven’t had a flare-up. Have you cut cardboard under something else? Are you aware that the air assist and exhaust will not affect the cardboard under the acrylic in the same way as if you are cutting the cardboard directly? I have cut material elevated and seen the embers build up underneath. Since the air assist can’t blow it out and the exhaust pulls air across the embers at a much slower speed, they continue to smolder much longer than anything exposed to the air assist. There is too much risk for me to even consider something like this.

It doesn’t matter if you are there if you get a fire going under the target material because you can’t see it. Not worth it. Leave a cutout as mentioned in one of the replies, but don’t cut directly into a layered material with air pockets unless you can see it.

Glowforge requires us to confine discussion of manual settings in their forums to the Beyond the Manual category. The current preferred practice is to either move the entire thread to Beyond the Manual or, to start a new thread there and, link to it from this one.

Well yes, I will say in over a year of using my GF I’ve never had even the slightest flare up in cardboard

@ben1, I don’t stack dissimilar materials and concurrently cut them - that seems really ill-advised, as the beam can only be tuned for one material at a time. I confirmed as much when I tried putting on some thick paper stock under the acrylic - it was a fire hazard and it gunked up the acrylic cut.

I had a flare up the first time I used cardboard, and it wasnt pretty.

I personally cover my bed in masking tape which helps prevent flashback, and also has other benefits.

Having said that, make some of these, and use them as standoffs… they work great:

My reply was to deirdrebeth, to ask specifically what her experience was, as indicated by the reply icon in the upper right corner of my reply.