I have tried in Inkscape to convert the attached file to an SVG file from a pdf so I can score instead of engraving. Import file , save as every listed svg available and export. I then load to the GF and it sees it as a bitmap engrave only. Suggestions ?

I don’t see your file.

SVG files are container files that can contain both vectors and rasters. It sounds like you have a raster in your file, and it will only engrave. You will have to trace it in a program like Inkscape, delete the original and then cut the copy.

thanks , this is what I’m trying to do . 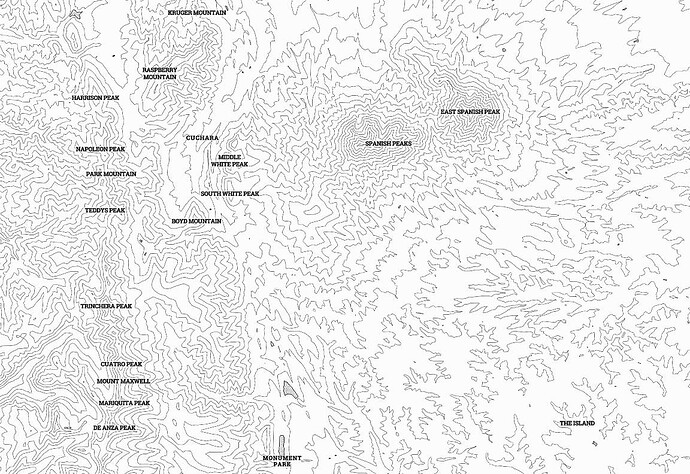 Headed down a rabbit trail. 2k feet of elevation gain over 2 miles! That seems like a fun and horrible day all at the same time.

You still have to trace that to convert the lines to vectors (it’s a function in Inkscape, not meaning manually trace it). Just saving a raster out in different formats doesn’t convert it to a vector - and only vectors can be cut or scored on laser cutter.

From your image - I’d go back to the source and see if there’s a vector version available to download (not JPG or PNG). There usually are or maybe you could get a new map of the area with this tool:

Hey, not sure if the much more experienced folks here would agree or disagree. With that much movement of shape and lines, I personally would just engrave. There is so much detail in there that if the

starts following those lines it’s going to start shaking like a washing machine with sneakers in it. Sure it might be a little faster, but perhaps not as fast as you might think. You could reduce other aspects of speed it up, like LPI. If you play with it on a smaller sample you might be surprised by the results.

form our house its 7000 feet elevation change to the west peak at just a bit over 10 miles.

Then you’re going to have to trace.

working on that now

For future reference, PDF files (which, like SVG files are just “containers” for multiple different file types) work on GF, so you don’t need to convert them. And also, as you’ve discovered, changing from one to the other won’t turn a bitmap/raster into a vector file.

Some of the USGS maps have raster images as their background and don’t use vectors for contours.

The ones that do use vectors for contours tend to be extremely complicated curves and have an impossibly high number of nodes. It’s a fair amount of work to get them to be ready to laser. I’m not saying it’s impossible, just be ready for some tweaking.

I largely gave up on that sort of thing because it was just too much of a pain to work with them.

Thanks for that input , I have a guy working on it on a trial run to see what can be done . If what he is doing works I will post the results.

Yeah for more details here’s my initial thread about it from 2017:

Is PDF layer extraction without acrobat possible? Beyond the Manual

Anyone ever managed to split a PDF up by layers? oK, now put your hand down if you used full Acrobat. I’m trying to figure out how to split one without buying (subscribing to)the whole adobe suite.

It was a few years ago but the same issues still exist in the usgs maps.