SVG Issue I Can't Figure Out

Any idea why the GFUI would choose to engrave over the flame part of this shape instead of around it? I can’t find any open nodes in it…the chalice part comes out fine.

 
Here’s how it engraves: (ignore the blotches – I tried sticking gold foil on it at the last minute and didn’t adjust for material height. 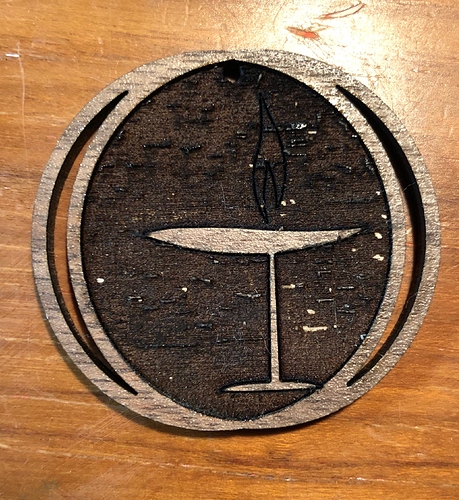 You might need to subtract the flame from the background if you don’t want it engraved. (Make a Compound Path.)

I did. That’s the problem–it’s ignoring the compound path.

The SVG above shows the compound path filled with black – my test to make sure the subtraction worked. I’ve inspected the nodes and can’t find any problem with it, but GFUI just engraves right over the flame like it’s not there.

Why don’t you post the file…it’s easier to look at it directly. (Are you using AD?)

I started it in AD but finished in Inkscape.

I cannot test it since I am doing a long project.
I took your post, un-grouped it, and just reversed subpath on the top entity.
Dunno if that will fix it, but works fine with lettering that does not want to cooperate.
geek.zip (1.2 KB)

Had to re-save it as a SVG before I could ungroup things. Not sure why that was needed but it was.

I took your post, un-grouped it, and just reversed subpath on the top entity.

I have no idea what you just said, but it worked.

I took your post, un-grouped it, and just reversed subpath on the top entity.

I have no idea what you just said

It is easy in Corel.
I looked at Inkscape and I think the options below will do the same thing.

It should show a path switch in the graphic.
When saved (I think) it will be the same as reverse subpath for Corel.

If not I can explore some more, but this looks like the Inkscape method.

This is useful when you have a letter like B (with some fonts or other graphics you wish to not engrave) that will not show a hallow inside the B. Reverse the subpaths on the inside nodes and good to go.

Ahhh, so reverse as in clockwise vs. counterclockwise, I get it now!

I have no idea what you just said, but it worked

It’s the winding rule issue. Reversing the paths results in something the GF can handle since they don’t support both.

Is this some sort of Unitarian metaphor?

LOL, well I guess it could be but in this case, it was my poor attempt to explain the topography of the elements of the drawing. See the flame was totally enclosed by the circle but the chalice was open to the outside when you zoomed in enough.

In the holiday spirit I will declare - Nice Until Proven Naughty.

You know the rules.
Pictures or it never happened.