SVGs with rectangles with rounded corners not loading consistently

I’ve never noticed this before I do use rounded rectangles a lot, so is this a new bug?
SVGs are created with inkscape

Oh, that’s even more curious! In Inkscape they are definitely showing with rounded corners, but when I upload them here, then I get exactly what I see in the UI.

Since this does not appear to be a GF issue, perhaps this should be moved to a different topic

It’s not an Inkscape issue, it’s a user issue…
(Edit: wrong. Inkscape is not displaying correctly, see below)
Convert your objects to paths.

No, that’s not the issue. All of the rectangles in this SVG are rectangles with rounded corners, not paths.

Convert them to paths. The problem is solved.

(The lower one is “flipped”, that might be contributing, but it doesn’t matter. The GF expects paths, not objects.) Edit: Both are rotated, missed it originally.

(Or just duplicate the top one and delete the lower one - which I did below. That fixes it as well - but I never even realized the GF would support objects. Everything should be a path, by my understanding)…

What a browser sees when duplicating the top rectangle, alongside the one in the original file.:

The lower one is specifying the x radius as 0.

Chrome and Glowforge are following the spec utilizing both radii. Safari only uses the Y radius. 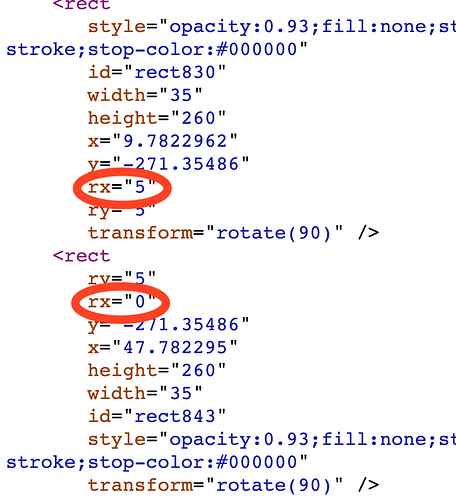 Something about how that lower rectangle was created or edited caused that in Inkscape. Duplicating the upper one puts the correct values in.

That is possible, normally I create rounded rectangles just by dragging the corner. I was messing about with entering radii manually this time. Interesting still that the display in Inkscape vs Chrome/GF are at odds with each other.

I do this rounding a lot, I shall have to pay more attention in future see if I can spot exactly where it went awry

You are right, there are many ways of fixing it - it just the fact that something that looks the same in inkscape doesn’t look the same elsewhere is the problem.

If you were inclined, you could post it in the Inkscape forums. I believe it is displaying it incorrectly. Chrome and the UI have it right.

As I said, however, I’ve never used objects. I convert everything to paths as I go, as that’s what I was told the GF expects.