One of my clients, the owner of a tattoo parlor, brought in a piece of flash art that one of his guys drew. He had an idea for an experimental mixed-media piece, and needed help realizing it. So I used google’s photoscan app to digitize the drawing for him. 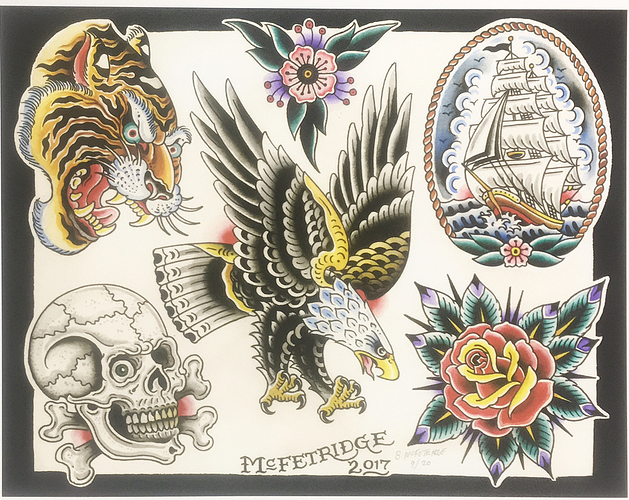 He took the scan and a piece of Proofgrade maple ply over to another shop in town, and had them print the file onto the wood using a Direct To Garment printer. That was somewhat successful but the ink beaded up quite a bit, especially the black. It might have worked better on unfinished wood, or if they had a dark-garment DTG that could have printed a white base for the colors to sit on. They had also re-sized my file just a little bit, so getting everything lined back up in the GFUI was a bit tricky… I had to use a ruler and very light scoring (just on the masking) to get it as close as I could… and then hit go on a 2 hour engrave (11"x14", SD Engrave). All in all, I’m pretty happy with how well it ended up working out. 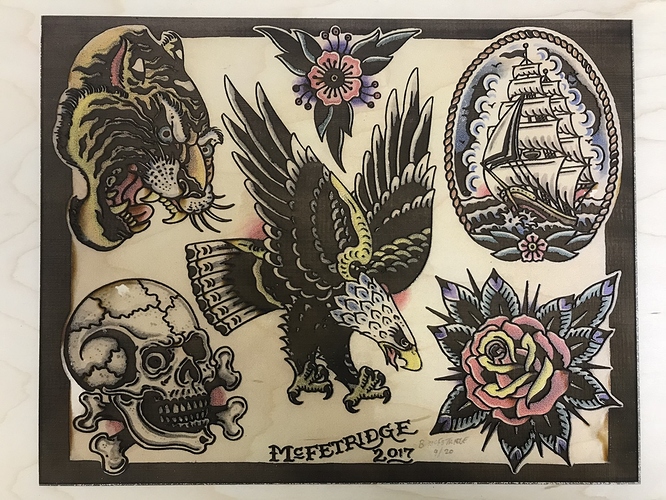 I removed the masking with T-Rex tape, which pulled up a bit of the ink on the top of the skull. The masking had also come up at a few spots, but when I went in to try and clean it up with an alcohol-soaked q-tip the ink came off before the wood resin (bright spot behind the skull)

Later I realized I could have added snapmarks to the file before it was printed o the DTG… and then even later realized that would likely still have failed because of them resizing the print.

Wow, it’s amazing! Too bad the colors can’t be as vivid as the original. Probably because they are on wood not paper. Still pretty amazing!

Is print on paper, or something similar and laser-safe, and adhere to wood before engraving not an option?

They currently have pages of flash art (like the original above) hanging all over the shop. He was specifically looking for a different and unique look. I’m pretty sure they are also friends with the shop who owns the DTG printer, and I suspect that the DTG is a pretty new acquisition for them, that they wanted to use.

My eco-sol wide format Epson gives me the capability to print to PVC-Free vinyl-alternative adhesive film that would be fine in the laser, and would have reproduced the original colors beautifully… but that’s not what he was looking for.

The whole print on the material to cut beyond just papers could be really interesting.

Not just woods, but cloth as well. Incidentally there are some great old fashioned techniques for photographs on wood too.

Also, I was thinking about custom shaped printed mouse mats and other such nonsense. You can get prints on almost anything these days - mix that with custom cuts and you’ve got something quite different!

Certainly a cool option … The original coloration is so very nice.