Tea Lights and Mirror Compacts and Moon Mirrors. What a Week!

I got creative with my Glowforge this week. After spending most of the summer writing, re-writing and eventually publishing my first novel, it was time to design and cut some stuff!

I saw a picture of a similar tea light holder and decided to try to make one. I have no idea how I managed to make the shapes for the back, but the Inkscape gods, apparently, approved and this was the final result. 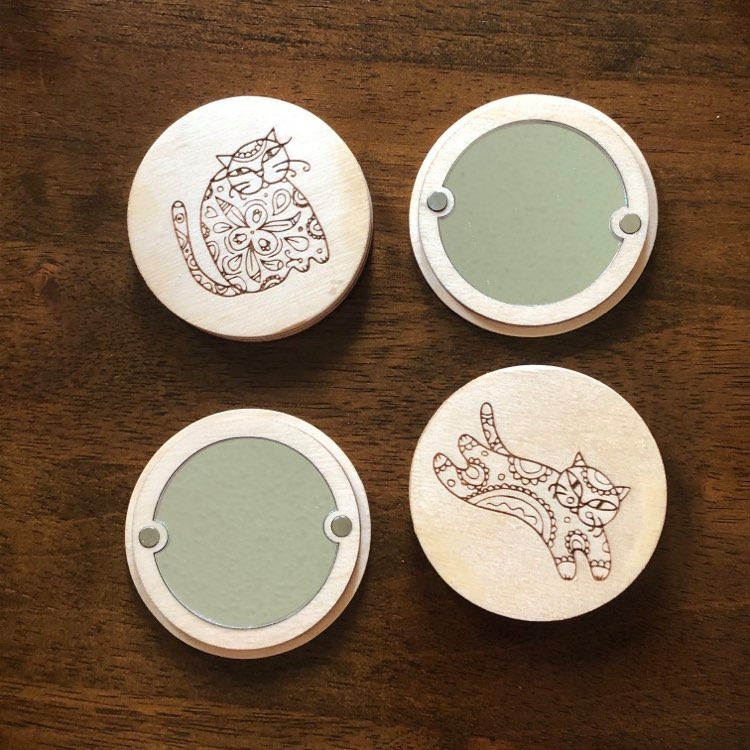 Next came these little mirror compacts. I was so pleased with how they turned out that they will go on my website for sale.

Then there are these beauties! Moon Mirrors! 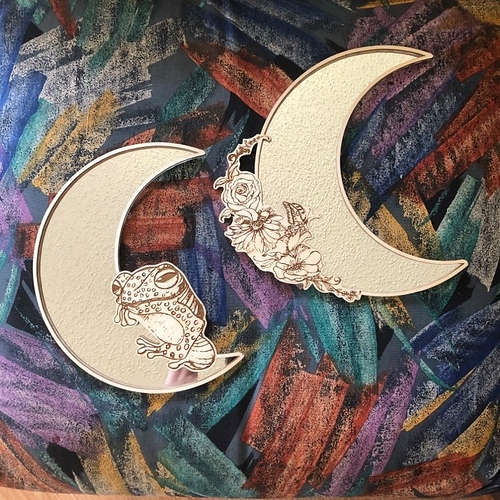 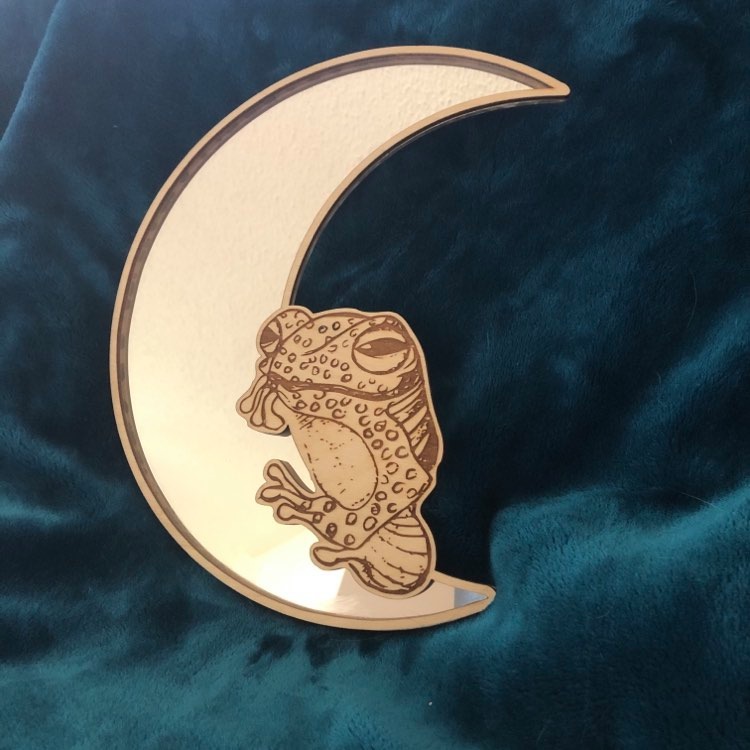 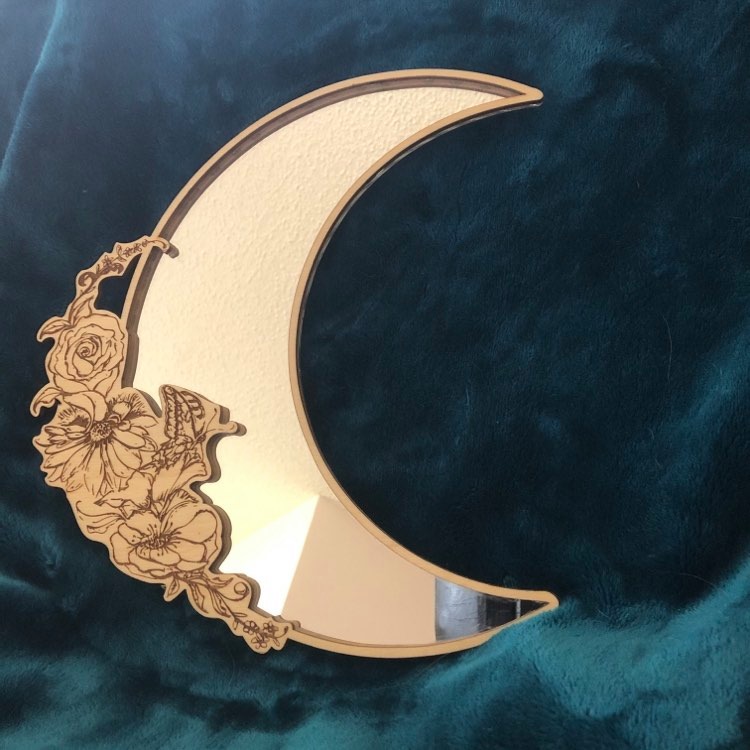 The artwork was done by my good friend, Karen J. The frog is my favourite. Something else new to add to my website for sale.

(nice compact designs, btw. I assume there are matching magnets on the lid side?)

@evansd2… Yes! There are magnets on both the cover and the mirror sides of the compacts.

My novel is a fantasy - average guy gets “Entangled” with an elf from another world and with the help of a dragon-wizard and a witch, embarks on a quest to sort out the Entanglement. He also discovers that he is the subject of a prophecy and has a rather interesting history with the dragon-wizard.

Scale is tricky here (hah, both for the novel and the magnets!), what size magnets are those?

Thanks! It’s been an amazing project. Book two is due to be released in the spring.

The compacts themselves are 3" in diameter and I used 6mm magnets to secure them.

How thick are they?

The magnets? I’m not sure. I’m guessing about 1/16" thick. After much unsuccessful fiddling with settings to engrave the recesses for them, I ended up cutting holes and then having to fill them so the magnets would fit. I am going to try two passes on the engraving to see if that will work. Full power didn’t quite do it. So, maybe, 100 and two passes? These are the prototypes. Eventually I will figure this out!

Hmm the argument could be made that you might want to get 2-3mm magnets and just be done with it? Fiddling with pocket depth is sometimes not worth the trouble, your end result here is great. Using thicker magnets or even doubling them up when you insert them might be so much faster that it’s worth it?

I had the same issue with some 1mm thick magnets. I ended up cutting a tiny piece of the veneer that came with the glowforge and putting it in the hole under the magnet, then gluing the magnet down on top of that. After that, they sat perfectly flush.

Did you use a mirrored acrylic? I think I have some laying around in my materials, but I haven’t removed the masking and I haven’t wanted to mess around with settings yet…so I actually have no idea what it looks like yet.

Yes, I did something similar. Then I tried two magnet on one side and that works too. I will keep playing and experimenting until I find a reasonably easy final solution.

I did use mirrored acrylic. The settings for cutting the it are: speed - 183; full power; one pass and it worked well with the 1/8" material. Although, I tried making some cupcake toppers with the same material and the same setting and it didn’t cut through with a single pass. Two passes and the acrylic ended up all foggy. Not sure why it worked with one project and not with the other.

Here’s a view of the inside of the mirror compact lids. I made some more yesterday! 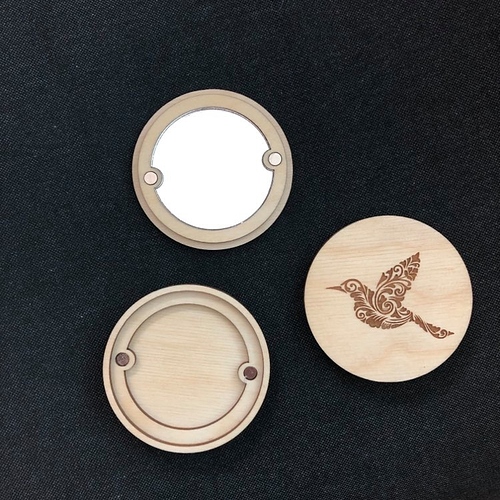 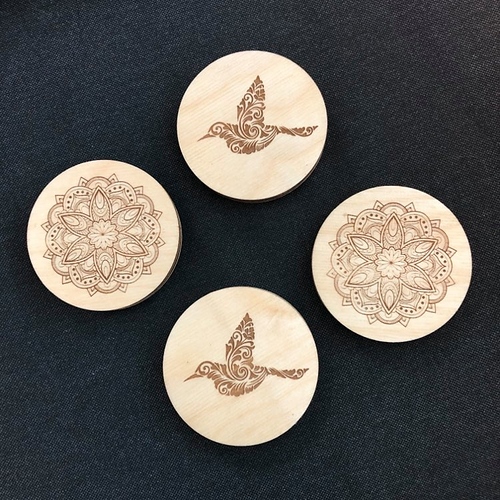