So one of the reasons I bought the forge was to be able to rapid make templates to run a pattern bit on my router.

Now the pass through will come in handy ultimately, but till then, slice and dice DXF…(if anyone has a good way to do the slicing in inkscape I’ll take it, SW was being a pain.). Also I was lazy so I just long sliced my piece of 1/4 BB ply and guillotine cut as I went. 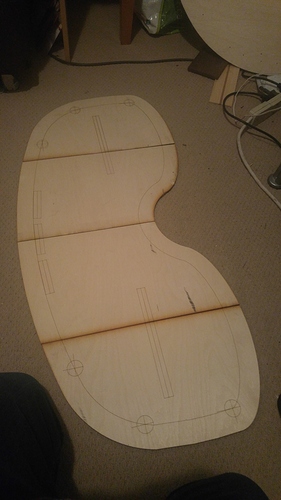 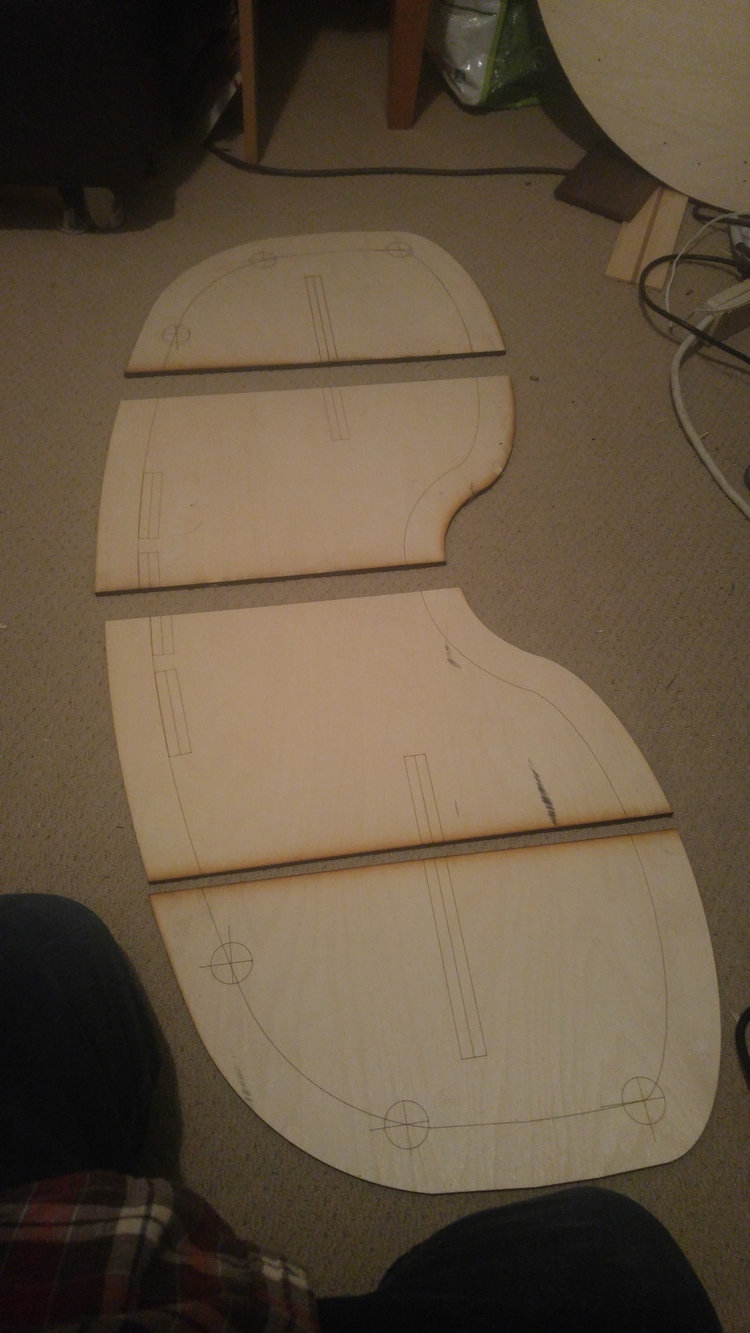 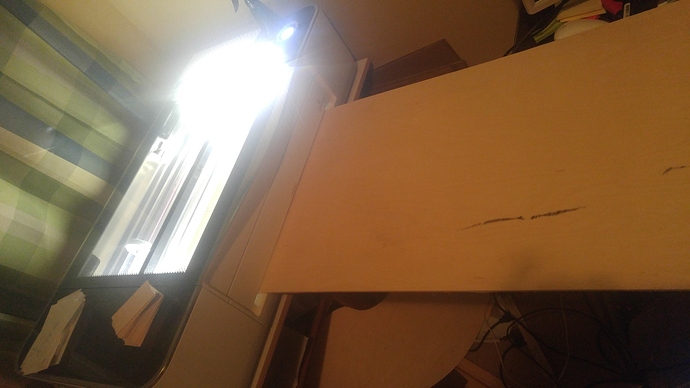 Love the pass through!

Also the up side to this is I can score mark all my drill holes and layouts. Yes I could do the drill holes , but this way I can alter my plan if I want to.

Splicing vectors is very time consuming to the best of my knowledge.

It doesn’t help you, but I found this plugin for Illustrator (down the page, cutting tools)

It has a tool called a table saw. I set up a guide and it just separates all of the paths as I zip it across the guide.

Maybe that gives you an idea of what to search for with an Inkscape plugin though? 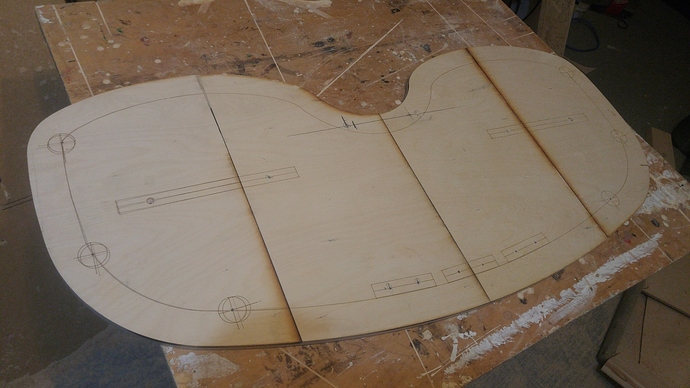 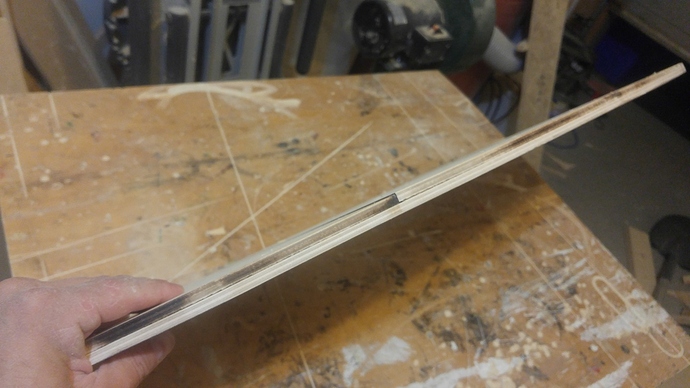 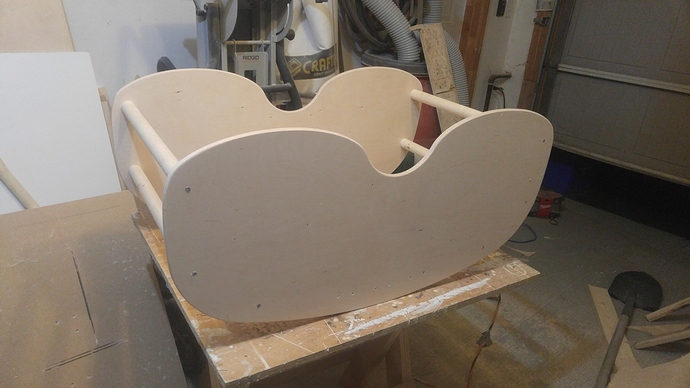 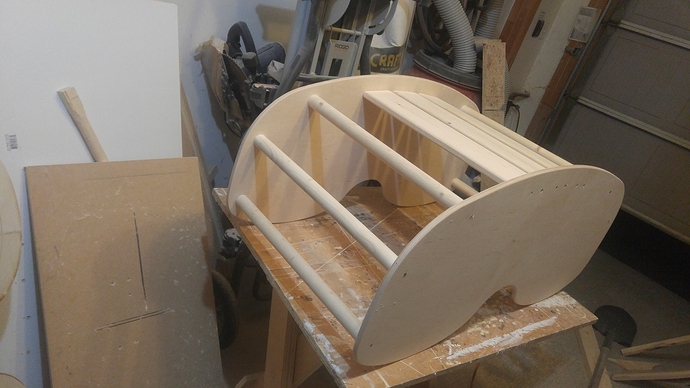 So the template went great, saved a ton of time making one the old fashion way. I lauded the sections onto a another 1/4 BB ply and pinned glued it. Jigsawed rough then flush bit on the router.

Then rough cut my good pieces , used the score lines to know where my through screw holes would be later and used that to screw all three pieces together then just flushed trimmed again. Also I could predrill everything.

Also the pre drill came in handy as I used a forstner bit to pocket for the dowels and the pre drilled holes were my centres.

Have a few of these coming up in orders,. This template is paid!

Only understood about half of that till you got to the rocker. Cool!

Sorry , I’m just really excited over a mundane thing. I know most people got their forge to make finish things. I bought the forge to do that, but also make things to make the things I want to make… And it did that. Flaws, but damn close, and some of those flaws are mine.

Oh no need to apologize…I’m new to woodworking.

Got it finished last night. Just some minor sanding and touch ups, then as with all new things, we get the QA department to test it. 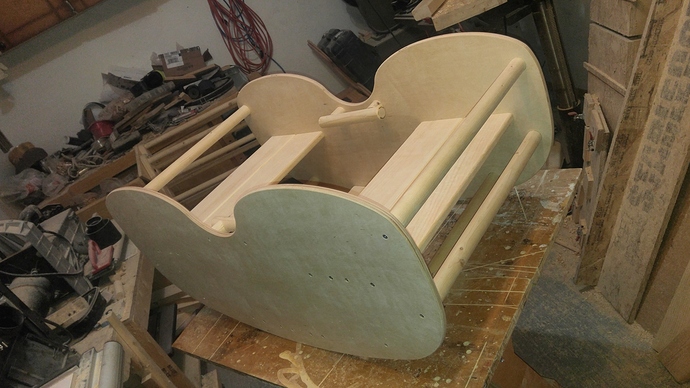 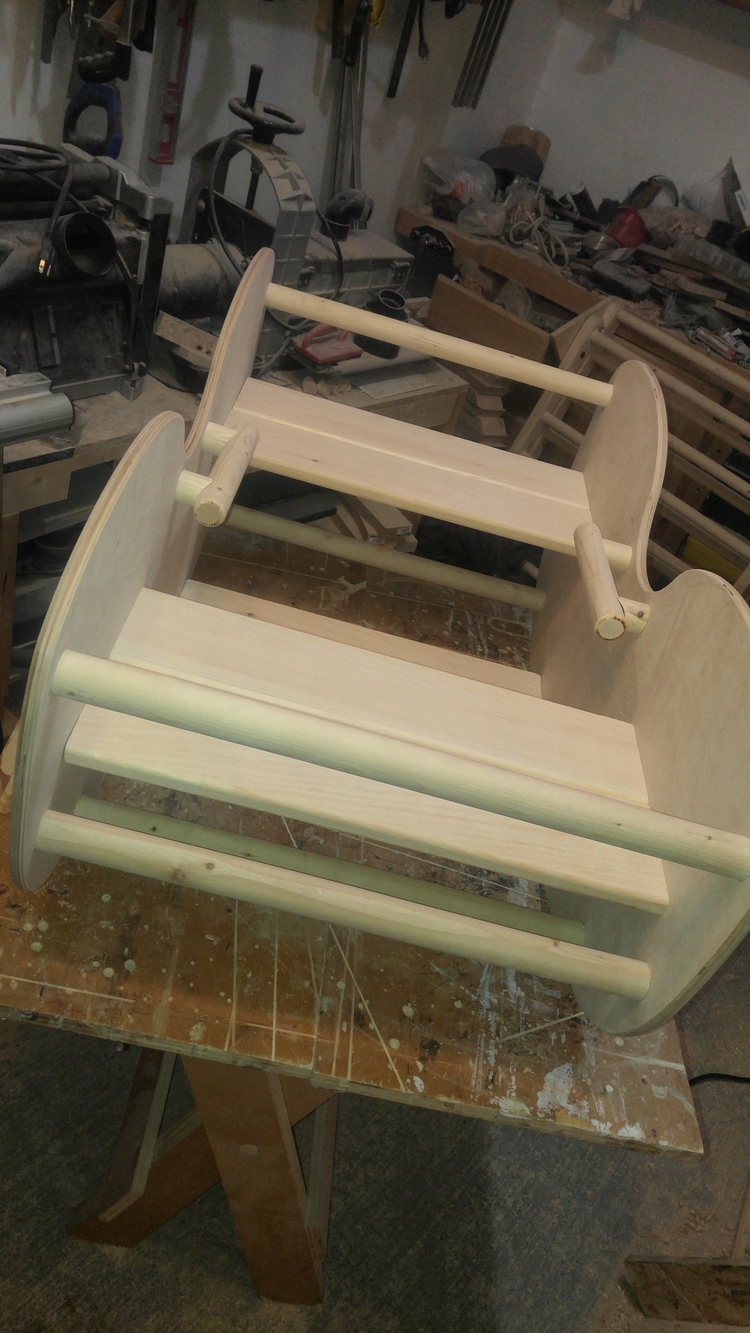 That turned out awesome! I made a bunch of pickleball paddles this year and spent a good hour just trying to make sure the template was identical on both edges. I haven’t needed to make a template on the Glowforge yet but glad to hear it is pretty painless and loved the joining idea for the multiple template pieces.

IIRC inkscape has a thing where you just draw a line, put it in the right place and hit the button. (Can’t remember the name because I just searched when I needed it.) Align&Distribute would let you put down a bunch of lines at intervals.

(What I have been liking is undo – I can easily do something like that to a design, save it, then undo the changes and make a bunch of others. So for example you could have staggered splits for laminating.)

So for example you could have staggered splits for laminating.)

Going to have to play with that!

The biggest things with the boolean operations is that two of them will only work with 2 selected objects, not groups at all, and the other thing is that what happens is applied to the object in the background. They are the most useful tools in Inkscape, along with the Aligns, but dang they are hecka confusing. Sometimes the warning dialogue along the bottom of the window can tell you what you are doing wrong (like trying to cut one path from a grouped path).

To cut, I have the one shape, draw a vector line across it, select them both and Do Path>Division. The line disappears. To see that the item is separated you have to deselect it before you can select the individual parts that you just made. Clear as mud, right;p

I just want a trim function like in autocad or SW…

But thank you for the write up and suggestions. I need to out the time in, which is that thing I have the least of.

Does Inkscape have something comparable to the knife (edit: i mean scissors) tool? You click on a path and it breaks it apart where you click?

If not, you could set a guide where you want to break the design. Then do whatever the process is in Inkscape to add a node to a path (double click?) and just follow across the guide.

Select that node and then perhaps, Path > Break Apart.

That will split the path into 2 at the node. If you are working with fairly simple documents (like simpler templates, etc), it wouldn’t take long at all to break them apart. If you have a bunch of paths, it’s a pain.

I would make a very thin wide box. Use that to slice in Boolean difference. You would want to add more length to what you cut but it could work. Breaking the nodes would work too if you used a guide to find intersections.

I have done a lot of things in Inkscape which boolean didn’t work well.

I just put a box or line in where I wanted to split, and then went into Node Edit mode, and double clicked on every intersection to add another node. Then manually deleted everything on the “wrong” side of the node to trim. Duplicate object after adding nodes and before deletion if you want to keep both sides.

After that, I do “connect nodes” on the now open segments where I want a cut to carry across.

Painful, but accurate and effective. So this knife tool sounds lovely to me.

Sorry - it was the scissors tool that I was referring to, not the knife (the knife is for cutting closed shapes).

I made a quick screen grab of using the scissors vs the table saw.

In the first portion, you can see that I drag a guide down from the ruler and lock it. I use the scissors tool to make a “cut” at each intersecting path along the guideline. Then, I select that cut portion and move it up.

I undo everything that I just did.

And… In the second part of the video, I use the table saw. You can see that I just select the Table Saw tool and zip across the paths.