The other day I posted…

https://community.glowforge.com/t/help-with-dividing-a-raster-image/35946?u=xabbess… to enlist help splitting an image so that I could try this with mixed media…PG ply with a piece of inlaid brass. I spent the entirety of this afternoon running so many variable settings to use with Laser Bond 100 on brass. Highest power lowest speed to highest speed and lowest power.

Finally got close, though couldn’t seem to get anything with text without some ghosting of the letters which rather annoys me. (if anyone has any ideas about this, please share with me).

The image in the first photo was split into an ‘inside’ layer and and ‘outside’ layer…and of course had to be in two colors to allow for separate engraving. When I got the engraved bezel done, the brass fits in exactly flush with the PG, so didn’t have to change the focus…only the engrave settings. it’s not as dark as I’d like…it’s a rasterized image…so maybe two passes might work. I don’t know.

This was an all new venture for me and I loved (sort of) figuring it out. 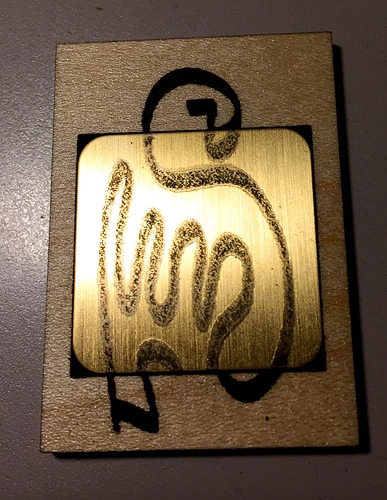 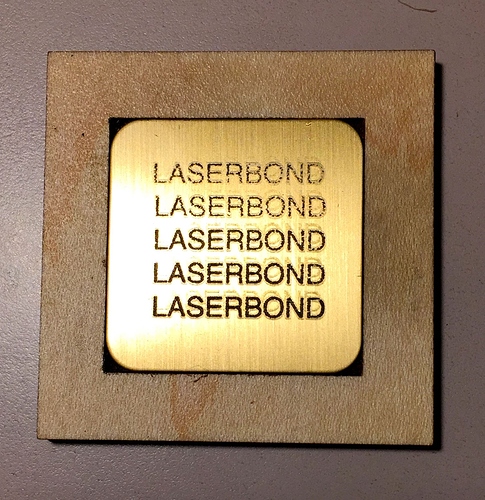 Ahah! So that’s what you were up to! Very cool!

That ghosting is really odd. I’d be really curious as to what is causing that!

Very cool! Keep us posted on your Laserbond experiments.

That ghosting is really odd. I’d be really curious as to what is causing that!

Me, too. As I said, it looks better in person, but if you’re the discerning type…which I am, I can see it and it bothers me. After comparing like 8 separate tests for settings, I think it was caused by power…not speed. At full power, it was the least noticeable. Made me wish there were settings in between full power and 100%. I’ve sort of wondered if it’s the material…and if it would do that on say, stainless or some other metal.

That really is odd, like a drop shadow. I can’t imagine what caused that. It also seems much more prominent with the text than with your other design.

There’s another post on here somewhere…someone using Cermark on stainless steel…and they got some ghosting, too.

Good job on experimenting. The ghosting would bother me also.

I think I know why the text was ghosting on the brass pieces. Though they feel smooth to the touch, they are not polished. They’re almost a brushed-look finish. The stainless rounds though, are very polished and take the Laser Bond much better and more cleanly. I think I will be trying to find some polished brass to try.

Just to show the comparison…though the stainless discs are so shiny they’re difficult to photograph.

Even though I read some very favorable comments about LaserBond, someone on the Facebook group said that Cermark takes less product (sprays) and that it comes out black instead of the dark gray like LB. And that if you can get Cermark at a decent price, it is the better of the two. After I run out of LB, I may give Cermark a try and form my own opinion.

a reflection is all I can Invision.
I can’t fathom the physics that would dictate a difference like that due to a brushed vs. polished surface.
I marked my Leatherman Wave tool with my name using vinegar on its brushed stainless finish that came out sharp.

a reflection is all I can Invision.

That was my only thought as well. It has to be something like that - except… how? Where would it be reflecting back off of with enough enough energy and focus to leave a mark?

There is not one bit of ghosting on the polished stainless pieces though…and they are way more reflective than that brass. I know you can’t tell in my photo…

Would the type of metal make a difference?

Would the type of metal make a difference?

Brass has copper in it…so yeah, I’d think that could matter.

Of course. I didn’t think of that. Interesting. Thanks.

True, I hadn’t considered that… But a reflection by definition I would think rebounds up and away from the surface, not at a sideways downward angle - perfectly, like a drop shadow…

Could it be constructive interference of a reflection interacting with the beam…?

I even put both the SS and the brass pieces under my USB microscope last night, so am over-geeking this by posting them. For myself, the photos really didn’t give me any insight, though. I think the reasons for this problem are way over my head. There IS a definite difference in the way the letters are finished on the edges. 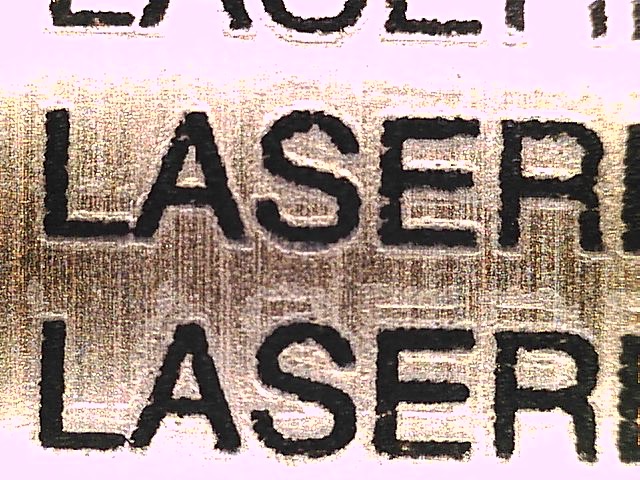 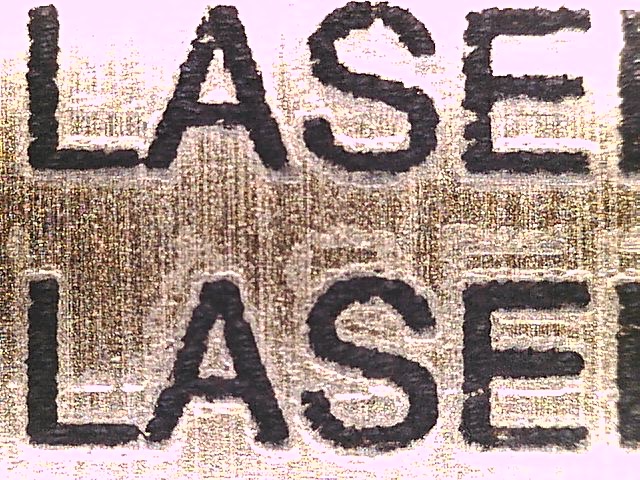 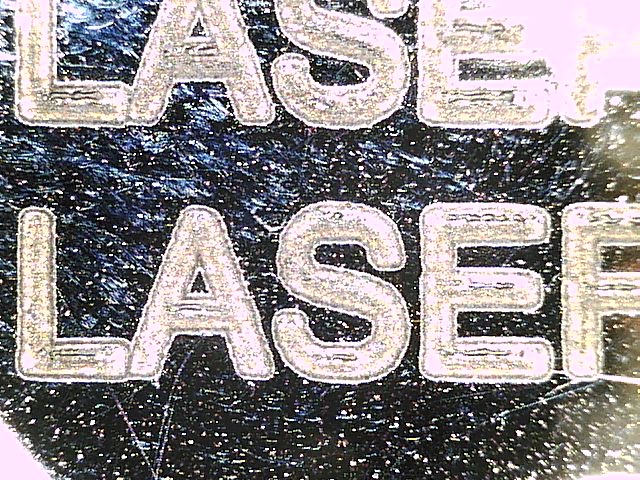 way over my head.

You are not alone. Quite a puzzle!