I thought I would never make anything out of cardboard. I never had a reason to, and I still don’t. Yesterday, I decided to give it a whirl with the recommended vase design.

I stood over my GF with a spray bottle of water, ready to strike if it caught fire. I was amazed. The only time there was a short burst of flame was when there was a label or ink on the back side of the cardboard. 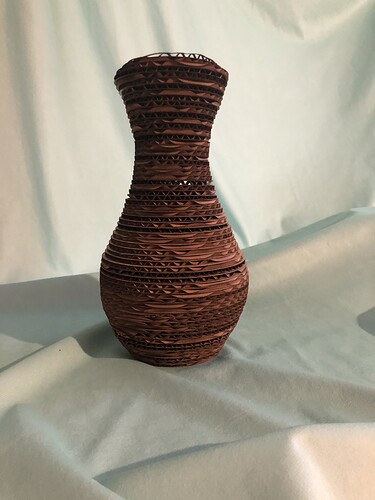 To my delight, it actually looks good! I love the textural element the corrugated cardboard created. Now to think of something else to make out of cardboard!

I was a little disappointed in the design, though. It requires 7 sheets of material. That is not an issue when recycling boxes, but with expensive wood or acrylic, it is an issue for me. The smaller rings could easily have been nested inside the larger ones, considerably reducing the amount of material needed. Since it is a design from the catalog, I can’t edit it to do that. I wish that was possible.

I know some of you use cardboard for prototypes. Other than that, what else has anyone made from cardboard? I’d love to see pictures. Photos of prototypes too! Tag, you’re it!

PS–I bet this design would be incredible made out of acrylic. Each sheet could be a different color, and at least one clear. Because of the way the pieces are laid out in the design, it would create a random stripe pattern. And you could actually use the vase for cut flowers.

Having spent some time looking at this design, I can see why you would think we could reduce the number of sheets of material. Many of the rings could definitely be nested. I am wondering, however, if nesting the rings would increase the fire danger or expose the problem of items dropping down and other things not cutting.

I think this probably looks best made from cardboard since the textured edges lend interest that the lasered edges of wood wouldn’t - not to mention the price of 7 sheets of material to make one vase.

I did the design in Fusion360 with the slicer plugin, and was kind of a last minute thing to coincide with the release of the cardboard settings. Thank you for the feedback. Having it nested was discussed, but just kinda ran outta time to get it tested and published. I’m glad someone printed it already!

Photos of prototypes too!

Pretty much everything I make is prototyped in cardboard 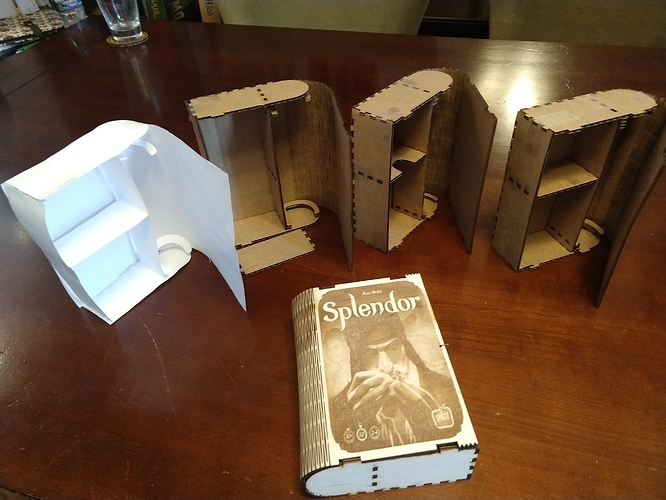 Good point. I had not thought of that.

I am surprised no one else has posted about it so far.

Thanks for considering nesting the rings to reduce the amount of materials needed. I did not know who had designed it.

I just finished printing and partially assembling the Decorative Layered Vase.
Very disappointed the way it turned out. I agree that nesting would have saved some cardboard but this is really only a concern with more expensive material. Two problems with the existing design:

That is a good idea. I noticed the holes were different sizes, but I figured it was because of the shape of the vase.

Confessions…mine is leaning too, but I took a photo of the good side.

The instructions say to keep looking from above to make sure that the center hole is uniform. Easier said then done.