On March 15, 2009, during launch preparations for STS-119, a free-tailed bat, injured and frightened, latched on to the foam insulation of Space Shuttle Discovery’s external propellant tank. His wing was broken and thus his life would soon end. But in a moment of bravery and ambition, his little claws buried deep into his foamy vessel, he became master of his own fate. He would not succumb to starvation or predation. No, he would soar into bat legend. He would touch the stars. NASA observers had believed the bat would fly off once the shuttle started to launch, but he did not.

For the last time, he felt the primal joy of flight; for the first time, the indescribable feeling of ascending toward his dream—a place far away from piercing screeches and crowded caves, stretching forever into fathomless blackness.

Once the shuttle’s rockets began pushing its massive frame toward the heavens, he turned his little eyes skyward. The shuttle gained speed, terrifying speed, and he knew he would soon slip the surly bonds of the Earth. His grip would eventually fail as Discovery sped faster than a bullet toward the inky blackness of space.

As Discovery’s rockets roared to life, he held his ground, although he was certainly afraid. In his adrenaline-soaked brain he may have thought, “Can a bat still be brave if he’s afraid?” I imagine he heard the answer echo, as though off the walls of his dark, cavernous home:

"That is the only time a bat can be brave."

This weekend, my friend is throwing a 10 Year Spacebat Anniversary Party. It’s a fundraiser for the “Space Travel Supply Company”, which is a real company because #Seattle. He asked if I could make something to auction off for the fundraiser.

My girlfriend found a bunch of 10x10" wooden picture frames with plywood over them. I spent a few minutes in illustrator and whipped up this: 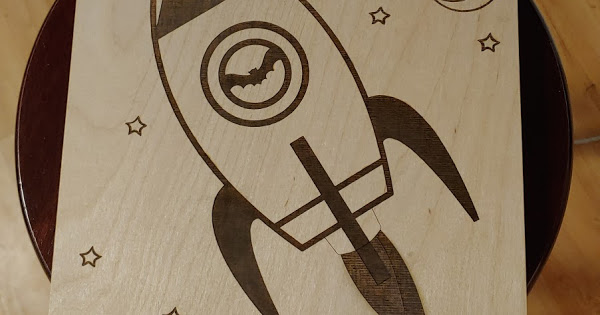 I LOVE this, and the story, its really awesome! Thank you for sharing it!

I never knew about the spacebat. Thank You for the great story.
I feel like I should have. Nasa Link

No, I’m not crying, the polen around here is just off the chart. I remember him and had many of these thoughts but I’ve never been able to craft a sentence like you to express them.
I’ve been watching launches since Apollo and still hope to watch the first manned launch to Mars.

(full disclosure: the moving words from my post are from: https://imgur.com/gallery/bwP6u)

I’ve been watching launches since Apollo and still hope to watch the first manned launch to Mars.

I stayed up Saturday for the Dragon launch just like I did for the Apollo missions. One of my best trips ever was a tour of Kennedy and walking around launchpad 39A (as an adult who should have been jaded but was gobsmacked by the awesomeness of it all

One if the few memories of my father was watching the Apollo 11 landing and later Armstrong’s first steps on the moon with him in a grainy black & white TV clouded in cigar smoke (the things ended up killing him).

I still remember where I was and what I stopped doing when Challenger exploded.

That was a great read. Hope the auction goes well!

I had missed this story … Thank you for sharing it … Along with your project. Looks great!

The only mammal species to ride the exterior of one of the great ships. It would be nice to include a QR code to that NASA link on the back.
Cool tribute

oof that would have been a good idea.