This is a Work In Progress thread. Going to start journaling creations as I do them. Most will be experiments, so expect a few failures along the way.

Prototyping. I’m planning to make these from yellowheart hardwood, but I need to make sure the designs can properly engrave. It took me multiple days to convert the in-game images into vector format with 95% accuracy. Some parts are thicker or thinner than found on the images so that they can engrave better, but there are still more fixes to be made. 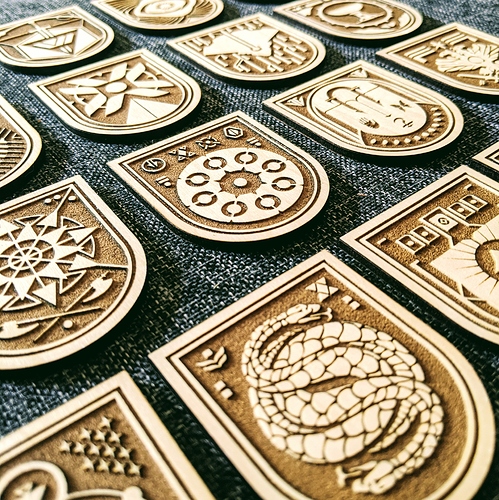 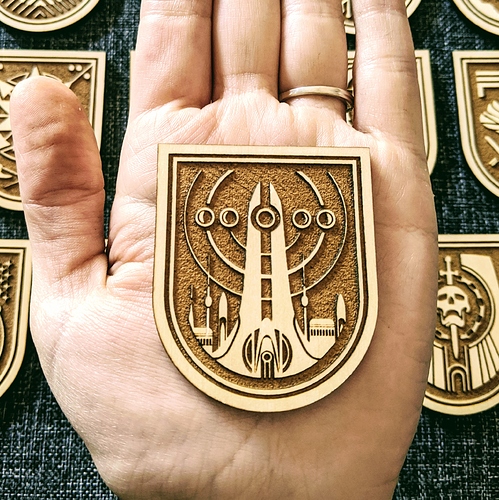 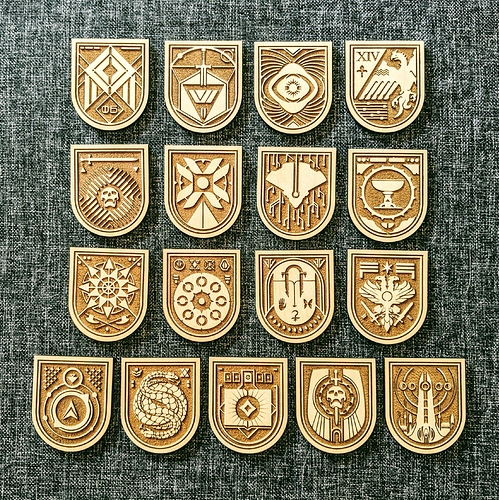 Some parts are thicker or thinner

People who play the game will probably settle for close enough.
From here they look grand.

What do you do with them?

Is the background engrave texture from the file, or the natural variation in wood density?

Triumph Seals are achieved when someone 100% completes a part of the game. It’s extremely difficult. People can buy the official ones from Bungie Store only with a code they receive if they complete all required tasks. They are metal seals that are displayed in velvet boxes. And of course, as a GF machine user, anything with a box can be made XD 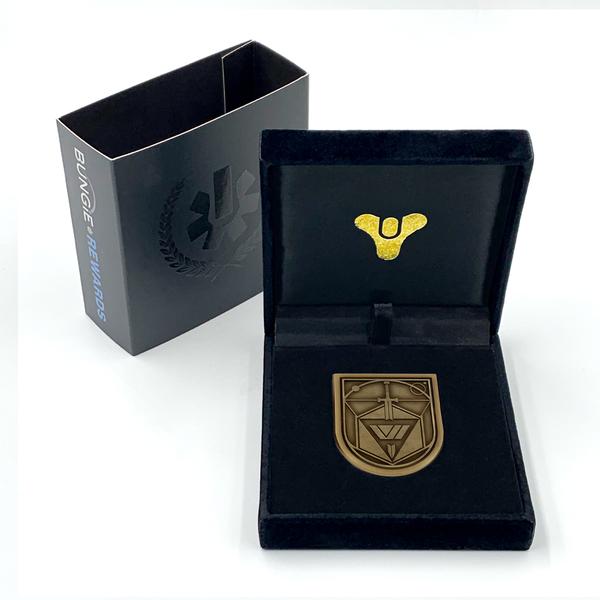 This special Bungie Reward offer is only available to players who earn the title Conqueror during Season of the Worthy. Bungie Rewards offers collector’s items to earn, acquire and unlock that are uniquely crafted to commemorate various tiers of in...

Natural variation of the wood. I rather like it. Adds a bit of life to the seals C:

Very nice! And the price is right.

Well when they get the code the price drops to $20 haha. The high price tag stops just anybody from getting it.

Your engraved textures do not look like « burnt » wood, did you do anything else to condition the texture to not look that way?

Uhm… Good question. I think I just used the HD settings? I don’t remember if I used those or my own settings haha. I’ve never really had “burnt” wood in my engraves though, or at least not often.

I must be doing something wrong then. All of my engraves result in burnt wood. Anyone can suggest what I’m doing wrong or a link to small tutorial or another post on this forum.

You should probably start your own discussion with examples of your issues, instead of polluting someone’s showcase thread.

If you were to try to help others instead of being rude, you could explain why. People are writing comments to learn new ideas and be creative. Your comments are nothing of the sort. They are short and fail to portray your point. If by example, you want to help someone understand their comment is not in the correct section, you don’t say “Your comment corrupts other’s post and should be made in a new discussion.” You could instead say, “I understand your frustration mr./ms. But it would probably benefit you to discuss this in another new discussion of your own as I’m sure, it would also be polite to the current poster.” If you do really want to help other write correct comments and replies as to be polite for that poster then be polite yourself in your posts. Come-on, we are past the age of stone a long time ago and we can evolve by being courteous and polite which is something only humans can do. I have to admit, it was a comment to one of my replies that really got me, but when I started seing other posts you made that demonstrates zero professionalism, and maybe your not, but it would make this forum much better to post complete, helpful and courteous comments . Besides, my final point is that if what you wanted was to not polutte that person’s thread instead of lashing out like that, you wouldn’t have polluted it yourself with your comment and you would have written me directly.

I’m just saying, I don’t take well to online or offline bullies and hatters and this is what your doing by writing this sort of comments. But I do understand your point for starting my own discussion to get more help. But I was also interested in her way of process and I would have asked her the same thing if I would have met her at her workshop admiring one of her artwork.

And after doing my master’s degree in arts and my 3 pre-graduate degrees, comments like “Ouuuhh… beautiful and oh wow!” Are not comments any artist, designer or tinker wants to here. They are less constructive than my comment was. My was a comment to try to get her to talk about her process. So if you please, take a few minutes before posting your comments and replies, since from my point of view and many others, what you do is corrupting the whole forum by posting plenty and helping none.

Hopefully you get my point and not destructive. Be less direct and more tactful. I think your agree that this reply as well as your other reply is quite sour and shows a certain lack of superior intelligence.

Also, if it where true that you want others to be polite as to not pollute someone’s showcase thread, you wouldn’t have polluted that showcase thread with a un-tactful and borderline rude reply to my comment.

And "If you don’t agree to the terms and conditions of using this site (that you did actually accept when you signed up), you’re welcome to go over to facebook where anything goes.” Is not at all what you tried to tell in your post. You mentioned nothing of the rules and regs. Maybe you wanted to be bashful because someone else was to you but don’t do it yourself. Unless, that’s how you want to be perceived. Which at that point then I won’t even bother to read your replies then.