The Darker Side of the Moon test engrave

Was ‘cheap’ photo frame glass that someone threw out, so thought I’d give it a go. 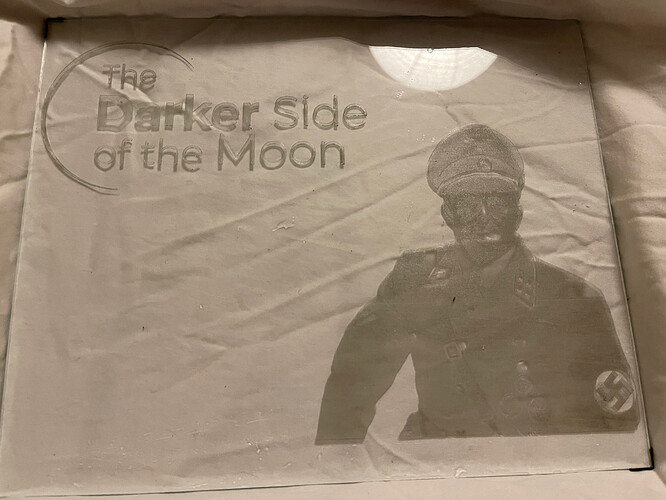 Next time slightly faster on both the lettering and the image (the glass surface melted, but comes away from the glass underneath).

THIS IS NOT SUPPORTING ANY RIGHT WING ORGANISATION ETC, this is a basis of a campaign for the US to stop celebrating Nazis. The picture is Wernher von Braun outside the Marshall Space Flight Center in Huntsville, Alabama, but he has been dressed in his SS Major uniform.

If you want support the campaign (and apologies if inappropriate)
TheDarkerSideOfTheMoon

That’s an interesting effect, but I believe I would try to lighten the statue in Photoshop to bring out the features more before engraving. It’s a little bit hard to recognize the features because the bronze is so dark.

Ditto what @jules said - take the contrast way up on the statue image and you’ll get more details when it etches.

also, I can get behind a petition like that. We (the US) put effort into giving him a squeaky clean image after he started working for us…and yet he never repudiated the Nazis in any real way :-/
This was an interesting read:

How Much Did Wernher von Braun Know, and When Did He Know It?

I enjoyed that article. I studied German history in college.