The hard way to do 2 tone acrylic, but in any color combo you want!

I’m probably going to go back to this method over and over again. These tags were cut and engraved from PG acrylic, went over them with a toothbrush to get rid of the “snow”, then spray painted silver into the engrave. Covered the front with blue tape, then sprayed the back and sides black. They aren’t as cool as my electroengraved tags, but they are quick, and the laser can cut the curvy outlines. 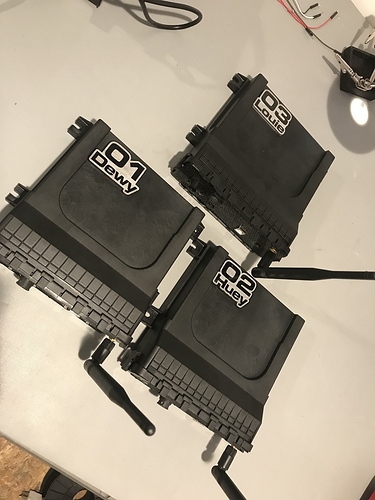 And Dewey’s name is spelled with 2 e’s

My OCD caught the order too but I was so amused. Reminds me of when we used to name servers.

We setup a redundant datacenter in my first job, everything replicated 1:1 on the other side of the country. I started naming servers as famous pairs, we’d have serious discussions and write incident reports about Abbot&Costello, Laurel&Hardy, Thelma&Louise, etc…

“The problem started when Lucy got out of sync with Desi…”

But no, the order is oddly correct, referring to the 1972 film “Silent Running”

But no, the order is oddly correct, referring to the 1972 film “Silent Running”

So not the famous nephews of Scrooge McDuck?

Perhaps that’s why the number sequence does not match the “Disney Natural” order.

It is theorized that Silent Running and Wall-E share the same universe.

Yeah. They let Click & Clack get away with it too - Attorneys Huey, Louie & Dewey at Cheatem & Howe.

I imagine its lack of interest to movie goers saved it some legal hassles. Silent Running is one of those niche movies. Ahead of its time and mostly ignored until years later.
A lot of left over 2001 technique got reused but the budget was obviously lower. Plus there were not any ray guns or car chases to spark interest. (movies that make you think fall into this box office death spiral it seems).

I remember at the time wondering how they got those robots to move like they did, and it stayed a mystery until about 10 years later when a back story on the making of it appeared.

Okay. We are officially off the rails again now, so back to the original programming I reckon.