The jankiest of external fan setups

I rent, so I can’t just cut a hole in the wall as I wish I could. I’m at least able to vent out a window, through what is allegedly a 5" duct compatible hole in a window sealer, but which is just slightly wrongly sized. Before I just had the 4" ducting that came with the GF attached to that, but I’m doing way more cutting now and the noise of the fan was making me nuts.

I ordered an external fan, and wanted to try and keep things going as they were, but I also had to keep the GF from taking over our living room (any more than it already has). It took a lot of very silly decisions and some inadvisable bends, but BEHOLD THIS MONSTROSITY! 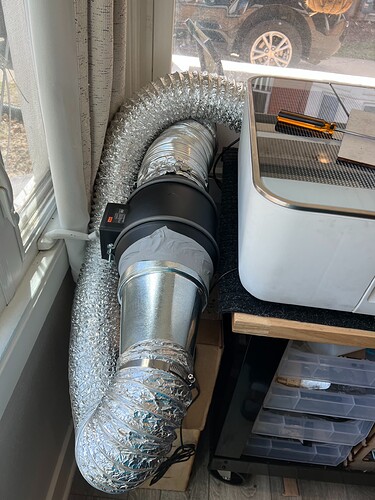 What in the ever-living hell is all this? It is:

It’s some of the hackiest nonsense I’ve built, but hey, the fan is strong enough and the bends are short enough that it’s still pulling more crap out of the GF than the internal fan was.

I did some measurements with my

watch, and was able to confirm about a 10dB drop in noise, and about a 5000% drop in whininess. I’d thought it’d be a bigger dB drop, but then someone reminded me that decibels are logarithmic, so a 10dB drop is actually 1/10th the intensity.

All in all: Using an external fan is A++ would recommend, this exact setup is like a C-. Passing, but barely.

I’d say that’s pretty good, not as janky as you make it sound

You might further reduce the noise a bit more by getting some insulated duct. It cuts the noise a great deal.

Hey, it’s functional. An external booster made using this thing a much different experience.

My 6" Vivosun inline fan is so quiet, I often forget to turn it off (it’s on a WeMo plug and I tell Alexa to turn it on and off…)

I use it to vent fresh air thru the house in spring and fall. Have it running right now.

I think that could be done in less than 12 inches. It would work better than shorter distances if the total were over 10 ft but considering I think PVC piping might work out better. A flat ring cut on the glowforge matching the inside of the 6" and outside of the 5" made tight could move the fan back to almost touching the window and a 180-degree six-inch and two 90 degrees 4" with a short bit to allow align with perhaps that megaphone thing then having the room to connect would have two 180 degree turns as you have now but they would be smooth and the cloudline can handle the maze. It would also look less “janky” as well as be easier to seal.

Yeah the problem is I don’t really have a way to hold the fan in place with a setup like that, the space between the GF and the window is less than a foot, and moving it out further is a non-starter given how much of our living room I’ve already taken over.

If I were a more patient person I’d have waited until we bought but at least when we do buy I know what I want for whatever room I shove the GF in.

Yes, it would need about 8" to make the u-turn out the back of the Glowforge and the back of the fan could be right up against the window and sitting on the table where it is now. the 6" PVC U-turn would stick in front of the fan perhaps 7 inches instead of over a foot and if the megaphone was not the correct distance in length the PVC pipe step up is less than 6 inches leaving room for pipe or hose running over the top of the .Cloudline.

My previous setup was very similar.

However, i just added a new machine and decided to simplify and have this janky set up.

Thanks for the suggestion! I’ll give it a shot next time I decide I need a new project

It’s the upstairs/downstairs of Glowforges

Yes, the upstairs is my cat’s condo… he’s behind on his rent, but he doesn’t care. 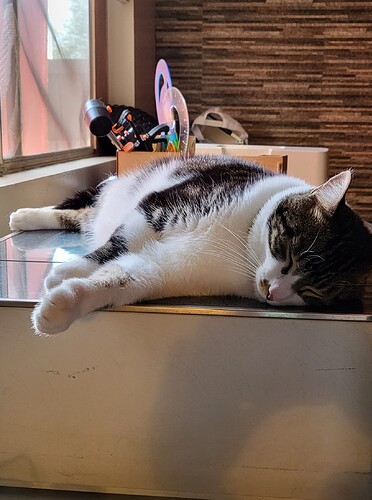 Haha one of my dudes uses it as his perch for birb watching: 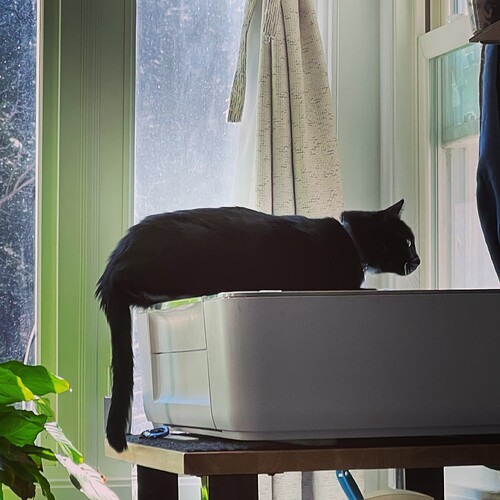