#TLDR - I exchanged my Forge and I like to ramble.

For close watchers of everything I post (all none of you, I’m sure) I encountered a strange issue when trying the Camera Calibration tool a few weeks back. Support and I pinged back and forth on it for a bit but they soon decided that they would have to do an equipment swap.

I haven’t been through that before and the concept irrationally weirded me out, as I guess I develop a (clearly insane) attachment to some Stuff, especially after I’ve Named said stuff. They want to Take Away UrForge and replace it with some doppelgänger!!

But luckily I’ve gotten really good at noticing when I’m getting ridiculous. Hurdle passed, I started coordinating with Support to get the new UrForge in and ship out the old one.

The instructions provided by Support were trouble free. I hadn’t ever packed it up to move before but luckily I took to heart the clear warnings about saving all the packing material, and so that got done, no problem. I’ll reinforce that advice here:
Don’t throw out your packing materials
All the orange bits and the big shipping box and the foam packing and as many box handles as arrived (!) need to be tucked away somewhere safe and dry. You’ll be very glad you have them if you need them. 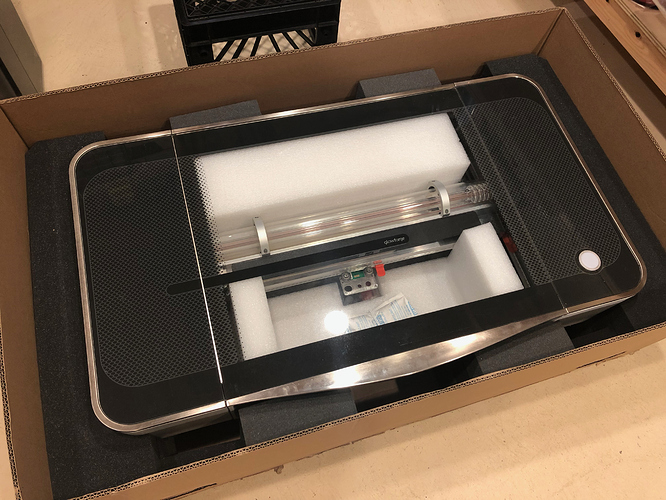 I was lucky that not only was the delivery date on a day I was already home, but I was able to coordinate having the old box ready to go so I could have the FedEx guy take it away after he dropped off the new one. That Just Happened. UrForge has left for the great beyond, replaced by … UrForge. I’m unimaginative and have a horrible memory. No chance of a new name, sorry.

I bribed the FedEx guy to help me carry the box to the basement. Pro Tip: Bribe people. The world just works better.
The box was in the FedEx truck on its long side, which is frustrating but reality; so many of you have reported it shipping standing on the short side or even upside down! I just threw up a little thinking about it… 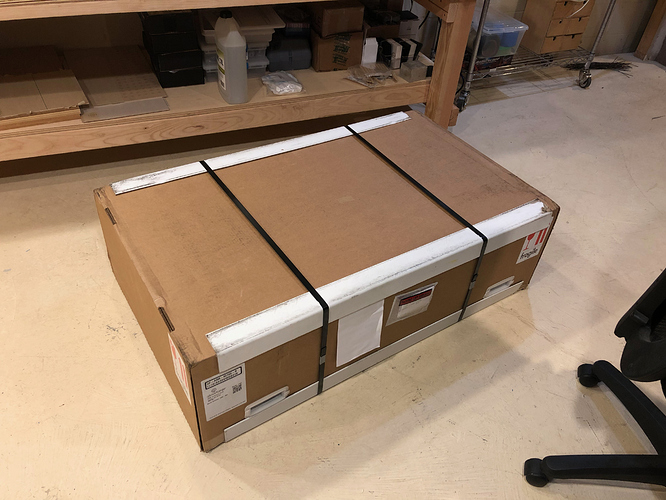 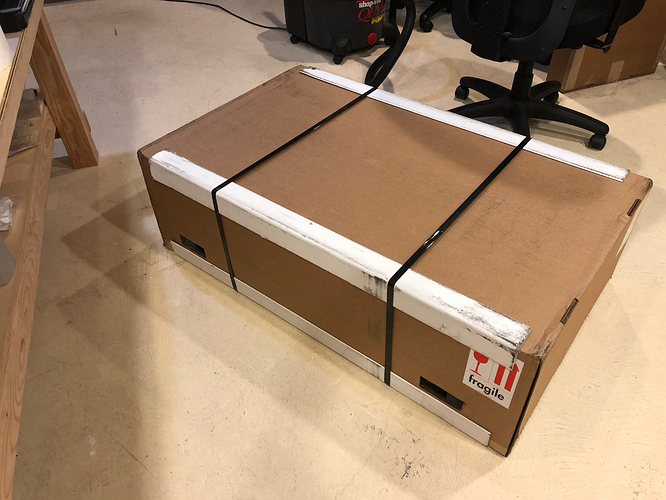 Some observations: Did they always come shipped with straps and edge guards? I don’t recall that they did, but memory fails (continually). If they hadn’t, good for them starting. The box looks to be in good shape.
One thing is consistent, those handle locks sure don’t hold. This one is missing two, last time only missing one. The dumpsters outside FedEx locations must be filled with those things each night…

And that’s where we are. This is still a work day and, unlike all my heroes on this Forum, that doesn’t mean I get to play with my laser cutter. Gotta get back to the “real” job. As soon as 5:00 hits, I’ll be racing down to the shop for the unboxing, which I’ll likely post about here, knowing me. I’ll definitely be doing a Gift of Good Measure first thing.

To attempt to give this post an actual meaningful point, Have any of you been through the trade-off process? How did it go?
Oh! I am very curious: As my first one was part of the initial batch for early adopters, and assuming (hoping!) that this isn’t a refurbished one, has anyone had both an “older” and a “newer” one and noticed any interesting differences? UrForge is a Pro (unlike its owner), if that matters.

Thanks for hanging in there.
UrJac

#TLDR It’s in great shape and working and the calibration is great but a strange cut through issue.

Its a few hours later and got through the unboxing. All went very well; no damage that I can see and everything where it should be.

Minor observations: The lid seems a lot more snug than the first one. Moreso for the front door, I used to be able to just snap it shut but this was tight against the crumb tray and I had to push it. The tray is where it belongs and I don’t see anything obstructing. It did close without displacing the tray so I think it’s ok.

The top glass seems clearer than the old one ever was. Maybe imagining that? Hard to say.

So I started it up and put int the Gift Of Good Measure on . Observations: 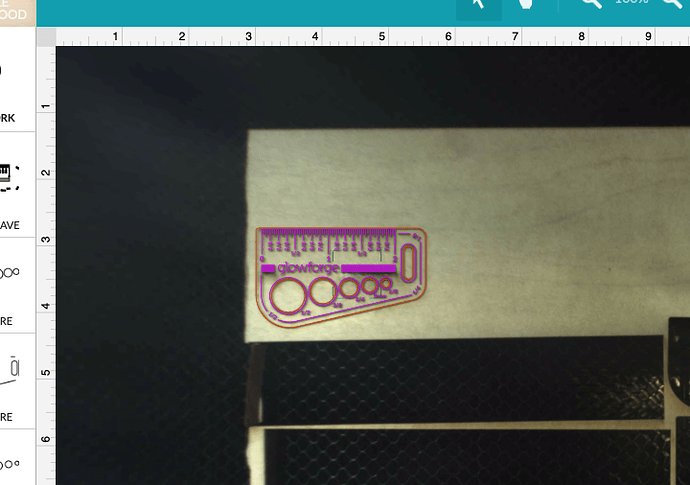 I’m thrilled about that.

So with that finished I thought, cool, here we are…

But then noticed: it didn’t cut through. Not even close (from what I could tell). The holes and the piece itself were Firmly attached. There were three or four light burn-though spots I could see, but it was still really on there.
So, I thought, that’s a bummer. It’s an older piece of Proofgrade Maple (in fact, it’s the same piece I used for cutting the GoGM out with my original Forge; it actually says “Beta” on it), but otherwise normal.
So… no panic, but hesitated as to what to do next. I’ll do some more tests to see if there’s a power issue, but in the mean time I wanted my ruler cut out.

Now, the calibration in my old one was so bad that replacing the wood and positioning the image via the camera would be a joke. But now… So: wood back in, positioned the image directly over the cut, hit the button … Perfect! I’m really impressed. It’s a tiny bit off, but fine for the kind of stuff I do, and such a vast improvement over the last one.

So that’s it, looks like I’m back in business. Oh, almost forgot to mention, I renamed it “UrForge” with no issue. There was some concern down in the comments.

Have a great night, all.

Good luck with this one!

I’m not sure you will have a choice about the name. I mean, the old one will probably still show up in the menu dropdown and you might have to supply a different name to distinguish the two. It will be interesting to see if that is still the case.

Yeah best of luck with the new one! (They have a different decorative surface pattern on the glass now. )

Fingers crossed for a frustration free experience. Also thank you for the laughs, I’m glad to not be the only one getting emotionally attached to metal, glass and laser tubes.

The straps and edge guards are new. New within the last two years.

I’m not sure you will have a choice about the name.

I’m glad to not be the only one getting emotionally attached to metal, glass and laser tubes.

The straps and edge guards are new.

Thought so! Smart move on their part.

We’re all crazy. (But all the best people are.)

I got a replacement, and while my shipping transition wasn’t as smooth as yours, the 2nd one has been perfect. Since your first was UrForge, there’s nothing wrong with this one being UrForge too! (UrForge2)

Looking forward to you next projects

(They have a different decorative surface pattern on the glass now. )

The plug arrangement on the back is different too.
The chastity plates over the pass-through slots were plain but are now engraved. I think that the handles were a genius idea but the execution, not so much. So tape became the Seal of choice

Sealsit.png466×553 285 KB
The Straps were not used when I received my replacement.

The chastity plates over the pass-through slots were plain but are now engraved.

Show pics…I didn’t realize they were engraving them now.

Hopefully UrForge will be happily reincarnated in this round!

When my original forge had to be replaced under warranty, I made the mistake of sending back my OG silver crumb tray. The replacement had a now-standard black tray.

The replacement had a now-standard black tray.

I was post-silver-tray anyway. Held onto my old black Dirty tray.

Thanks for sharing that, glad you’re back in business