Things for a n00b to pay attention to. X2

So I’ve have my GF for two overnights now. And I’ve done the same stupid thin both next days. Started the first cut with my vent door in the window shut.

So… first escutcheon idea to remind me.

Came out looking great, added some acrylic paint before removing masking so text would pop off of clear acrylic. Black for main text, white for the “fire” line. 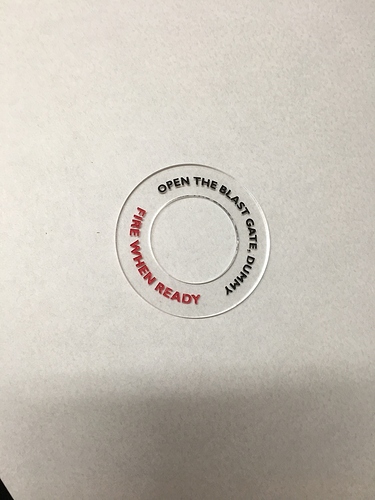 I really like adding paint/ink to some engraved things, adds pop.

Hrm… ok, first thought for install is it was slightly tight on the ring around the start button, but workable. 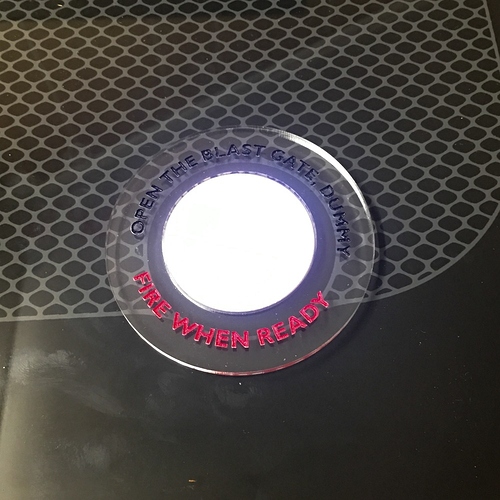 Maybe black was a bad idea. All red or white and red.

Still looks great! And I now learned how to paint. I never thought about it but painting prior to removing mask is genius

thanks! i like it when it’s not being used for it’s intended purpose. maybe i need to paint the back white now.

i’ve now tried paint (acrylic paint on acrylic) and ink (on engraved wood). i like both effects. definitely do some testing on some scrap engraves to see what you like and how to make it work best. i used unthinned acrylic paint on the escutcheon and it filled in the engrave nicely.

One tip, reverse the text and have it print on the “under” side, so the top is smooth and shinny. Plus it won’t collect dust in the letters where it is difficult to clean!

I am in the same boat as you when it comes to forgetting things: Handy Reminder! Glowforge Rules

Even with these right under my hand I still will forget, though, not nearly as much as before

Great escutcheon. Brilliant idea @fineclonier for keeping it cleaner.
I’m sure that I will forget to open my blast gate on a regular basis. This is a clever way to remind yourself.

ROFL! I love the idea!

When I had mine venting out the window with a blast gate, I got int he habit of unplugging the GF and putting the cord on the blast gate as I was closing it when I was done.

The next time I went to turn on the GF I had to plug it in first and since the cord was hanging on the blast gate I remembered to open it.

Before doing this process, I to stated a couple cuts with the blast gate closed

first time i left it closed, i freaked out a little before i realized my mistake. there was smoke pouring out of the crevices around the door and my smoke alarm went off.

side note: i don’t know if it’s super safe, poor location, or a little of both, but the smoke alarm in my attic office is about 18" away from being right over the GF. before i got the vent sealed up really well, i had to wave a cardboard sheet at that thing way more than i wanted to. thankfully it’s not going off any more now that i foil taped the crap out of the standard included vent. it’s now rigid.

Ha! Early on I was engraving something and watching it do its thing when very quickly I said “Hmm… This material smells much stronger than the material I was using yesterday.” Then it hit me… “I never put the vent in the window!!!” There’s a first and last time for everything.

Take a page from the Make Things playlist - connect a servo to the blast gate that opens it when you turn on the GF.