Thinking inside the box

So he made a box. yawn… But this is a special box! First let me describe the problem and then the box (and why it’s special). So for anyone who has a brachiocephalic dog like a bug you are probably familiar with the syndrome called “collapsing trachea” when they bend down to eat they snore/sound like they are choking. This is because of flaws in the cartilage rings that hold your trachea (airway) open when inhaling (which causes a vacuum which atmospheric pressure pushes closed except for the rings. The rings themselves are only 3/4 rings as your esophagus runs behind the trachea and you need to be able to swallow that quarter pounder with cheese which if the rings were complete would compress the esophagus against the spine behind it. So we have a squishy gap in the back. This all works perfectly in most of us, but pugs and similar squished face animals (grumpy cat I am looking at you!) and certain humans (in people we call it TBM - tracheobronchomalacia) have a similar syndrome. This can severely impair breathing and really limit quality of life. So there are several strategies we employ: we can stent your trachea open with a custom silicone stent, which works OK (we print the molds on a FormLabs SLA printer and a certified manufacturer makes them for us which we insert with a bronchoscope; but this can only stay in a few weeks although it helps the tissue recover. Or we can operate and sew a patch over the collapsing part to strengthen it which is a permanent solution. However the literature on exactly what patches to sew in and how to sew them in is not great. So our chair of thoracic surgery asked me to build him a box in which we could stick a dog trachea (from a dog necropsy from a dog who died of unrelated causes but has the condition). The trachea is stuck over the two endotracheal tubes ad the balloons inflated meaning the inside is at 1atm of pressure (i.e. room pressure) and then there is a nipple on the top of the box that fits a blood-pressure cuff inflator. We then add a full atmosphere of additional pressure into the box. The using a high speed camera we measure the deformation of the trachea where the patch is.

So what makes the box special? It’s freakin air-tight with a gajillion holes in it. The other thing at least so far is it is strong enough not to blow up in our faces when inflating it. I used 1/4"

clear acrylic. When I added up the forces with a 1atm difference it came out to 960lbs of force on the box walls!! Anyway the box bottom has engraved nut pockets for the unlock nuts on the bottom and all the openings for threaded shafts have 4mm o-rings (the hardware is all M4). For all the joints in the box I used a brush to paint on the weld-on acrylic cement to get an even surface. Then I used capillary action to fill them in. The end-plates are doubled to give a longer tunnel for the ET tubes to seal with silicone sealant. All the joints have clear silicone sealant over them as well (I figured the air pressure would force the silicone into any leaking holes). I found only the GE silicone sealant at Home Depot stuck to acrylic. The DAP sealant didn’t stick at all. The GE advertised “now sticks to more surfaces” so I gave it a try. I made an o-ring like seal on the top where the top clamps down with the silicone. I tried 3D printing it in TPU but my printer wouldn’t cooperate!

. Anyway here are some pics: 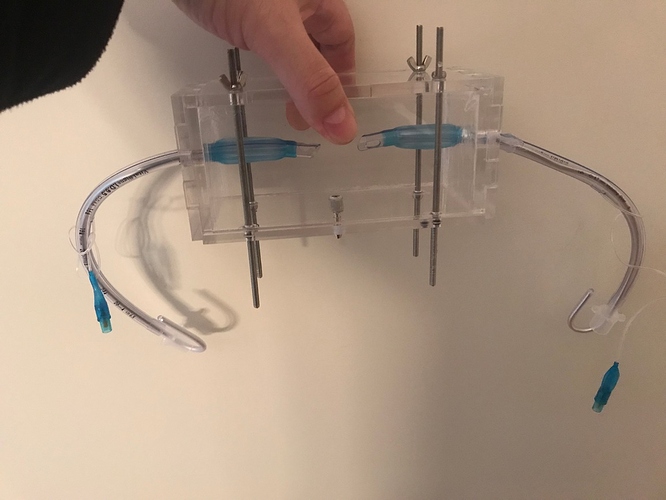 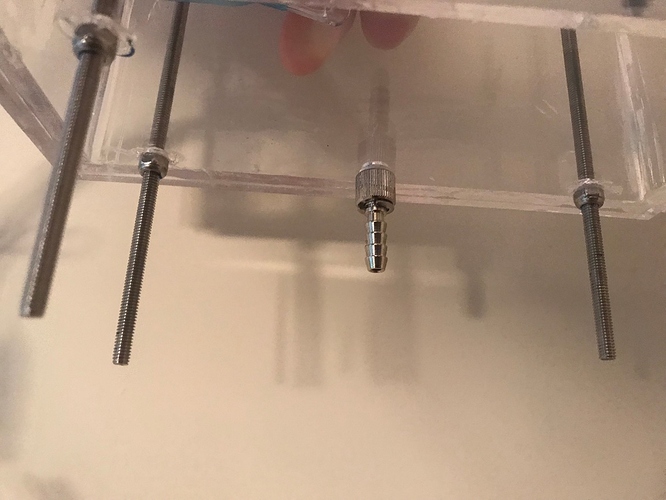 That IS a cool box!

crazy stuff. the description kept me thinking about GOLPP and my dog’s laryngeal paralysis, which is obviously much different but makes me wish there was something less harsh like this to treat it than tie back surgury.

anyway, this is way cool.

Am I reading this right in that it is like OSA but farther down and much worse?

(We did something similar once testing a BOP stack and managed to perforate a car with slurry when a nipple weld failed. Luckily the one that gave was pointing the other way.)

Yeah, somewhat like OSA, but in what should be a rigid structure

Holy smokes, that’s amazing! Is it performing the way you had hoped?

managed to perforate a car

Yeah, it was the contractor’s who did the weld. Instant karma.

(Found out that I’m pretty fast too, when properly motivated. Took the fellas half a mile to catch up.)

the contractor’s who did the weld. Instant karma

It was the Contractors’ car?

Not the head honcho’s - it was one of his crew’s.

That would make it Carma