Does anyone have any tips/tricks and engrave settings for the 2 tone engraveable stuff from Inventables?

I feel like no matter what I do I can’t get a 100% clean engrave. Meaning, even after I vacuum out the stuff that’s been engraved off and give the pieces really good scrubbing (with very stiff dishwashing scrubbers and with isopropyl alcohol and dishwashing soap) there is still remnants and specks of the top layer that doesn’t come off.

I did a sheet of pieces for earrings which took 3 hours and only have like 4 sellable pieces because the rest I can not get to look clean enough. I would have to spend more time cleaning up with a Dremel tool and that just defeats the purpose of what the laser should have done.

I’m using the red/white 1/8th (engraved areas become white) and doing them as raster engraves instead of svg vector engraves (if that matters). When I’ve done things as raster engraves (text mostly) and use the GF settings it engraves things SO DEEP and with this kind of material all that stuff just gets into those deeply engraved areas and it creates a similar situation where it just dirties up the engrave with all the colored dust and I can’t get it cleanly cleaned out no matter what I do. I’m open to trying this again as a raster engrave (its just simple shapes and letters) but maybe there are better raster engrave settings that work better for letters/text that doesn’t create such a deep engrave but still deep enough to laser off the top layer of this stuff cleanly? 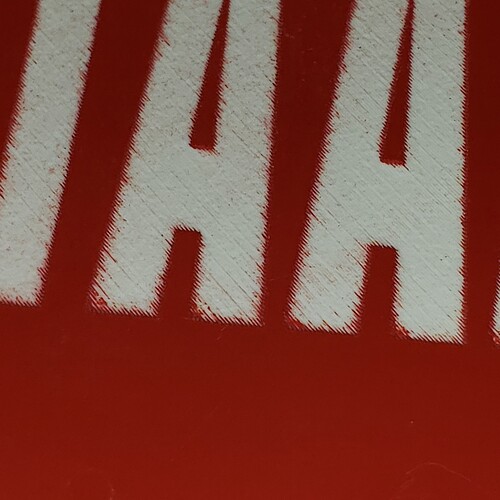 It looks like it possibly might be a LPI issue but its already set at 340 and the sheet took 3 hours. Increasing the LPI would result in an even longer engrave

Some people have had success running a very low power defocused engrave as a “clean up” operation or doing two passes the first one engraves away the top layer and the second pass removes the residue from the initial pass.

Here is one thread discussing this: Two layer acrylic - #3 by mpipes

If you’re selecting vary power, it would seem to already be a raster (vary power or convert to dots isn’t an option for vector engraves).

If it has been converted to a raster, the resolution that it was converted at can make a difference in the quality for sure.

Also, is the material being masked? You may be having focus issues since the material is red, and it uses a red dot to try and measure the height for auto focus. You could try using manual focus to lock in the correct focus.

I had an issue with the top color in the engrave the first time I used it. I figured it to be the dust from the top color. I got the best results from blasting out the engrave with a stream of alcohol from a squirt bottle. I’m sure there are other methods, that’s just what met my expectations.

This really great video might help. (It’s a different laser so not everything applies to the GF, but the concepts are the same.)

I’ve literally SCRUBBED it with dishwashing soap and alcohol and can’t get it fully cleaned. And I vacuum as much as I can before I even take it out

That is SO helpful!! I did try a defocus engrave but I should have maybe done more!