This feature is great when it works. Getting it to work appears to be a blend of luck, the capabilities of your machine, the design you are cutting and technique. When it does not work, it can be frustrating. I offer these tips to decrease the odds of that frustration visiting you. Your mileage may vary but these seem to tip the odds in my favor.

Tips of the hat to Jules who has helped many with pass-through and came up with many of these and to evansd2 for suggesting this post to me.

If/ when the auto alignment fails…

You can also use Gate Pins to keep the material moving forward straight.

Not a good link.

I’ve tried everything but the boots.

The issue I have is that when i get to the remainder print, GF always says there’s an issue and I have to manually align, which looks okay when I hit ready, but then “jumps” over at least a 1/4".

Have you had anything like that you’ve been able to resolve?

Also, could you explain this part? Didn’t make sense to me, but maybe I crossed over to insanity after trying so many dang things to get the passthrough to work.
You want the pictures before and after to match about an inch or two down from the match point on the right. I use painters tape applied before moving between cuts and then removed after moving to keep the bits in near the match point.

Also, could you explain this part? Didn’t make sense to me, but maybe I crossed over to insanity after trying so many dang things to get the passthrough to work.
You want the pictures before and after to match about an inch or two down from the match point on the right. I use painters tape applied before moving between cuts and then removed after moving to keep the bits in near the match point.

If there is something in the first image that is missing in the 2nd, this may make it too hard to figure out the placement . The area that really matters in this process is the area near where the parts join, i.e. within an inch or 2 of where the art needs to line up with the prior cut. One thing that could be missing are any small bits that were cutout during the prior cut and removed during the move. I suggest keeping them in place so that their absence does not cause an issue. One way to do that is to use some tape to hold them in place during the move which then gets removed so as to not get in the way of the image processing.

If your manual alignment is off by 1/4 inch calibrating your lid camera may tighten that up a bit but is not 100% sure of solving it.

Bottom line, This feature is not perfect and appears to be less perfect on some machines. My luck comes and goes.

Yes, I’m realizing how off my calibration is.

At this point, I’m tried to etch a drawing, now trying to cut square around.

There was slightly more success on the lining up of the print, but my GF never gives me the option of auto align. Every time I’ve tried, about 15 at this point, it automatically goes to manually align.

Took me 6 tries to get the box, because I’m just trying to experiment with if it every auto aligns.

Here’s a pic of what I’m kind of going for…as you can see, I had to keep cutting the box smaller and smaller in attempts to have the lines meet. A real barrel of monkeys that was!!!

So there aren’t any pieces to remove. Any other suggestions based on what you can see I’m trying to achieve?

Thanks so much for getting back to me on this! 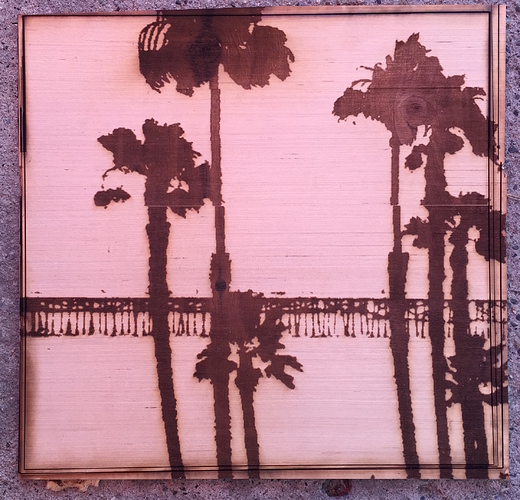 I sometimes end up using the passthrough for shapes with minimal detail in the area where the camera wants to line up the cuts. To add more detail, I will use the gf design tools to add a few scored outlines just outside ( 1 mm or so) of my outer cuts. I put this outline first in the order of operations so that it happen before the engraving or scores within the part or cutting starts. IF there is room. I might add a bit of the prefab art just outside of my part as well (typically small and as a score).

I believe this has 3 benefits, One is that it gives the camera and software more details to chew on when trying to align the bits. The 2nd is that if the alignment is off, the score will let me know before the cutting or engraving starts. The 3rd is that if I have to manually align, the score happens first and thus lets me check it before the irreversible part begins.