Trivet For The Win

So there I was playing with some designs I had put together, because some were coming out interesting once cut. This one in particular. I was playing around with stars and had noticed that the stars created a diamond in between them when joined in this manner.

In walked the wife, and she asked if that trivet was for her.
I said, “Yeah babe. Sure thing… What’s a trivet?”.
She mentioned it was like the flexible bamboo thing she uses.
“Ahh”, I nodded smugly. 'The pot holder…”
“No, not a pot holder”, she corrected me. “A pot holder is”…
and I got the fast track lesson on kitchen terminology and the various safety gear available.
( I had the last word. I stored it in the Useful Things//Pot Holder directory - don’t tell mom).

So anyway, here is the Trivet. If the wife liked it and has a use for it, I imagine someone else will also.
I will elect to count this as successful, since I was just going to toss it when done, and that would have been a sad day for Trivets.

I have to disclaimer on this also.
I made a few from some large chunks of 0.18, and 0.21 ply, plus some draft-board sections I had in the Left Over box, but I have no idea how they will handle heat or abuse.
I may need to bond two of them together for a thicker Version 2.0

Lacquered them up to give them some legs, but like I said, the jury is out on how well these will function.

On the plus side, lot of scraps in the Left Over box and a new one can be burned faster than it takes to weed it, so…

EDIT: Decided to glue the two draft board together and added feet. Lot stronger and is slightly off the table.
Feet greyscale so just proofgrade 3D engrave and then cut the circles out when they are done. They lock right on for easy gluing. 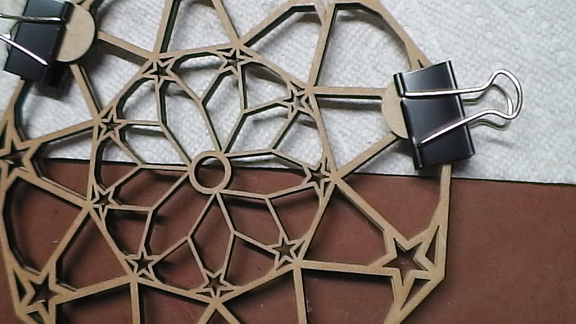 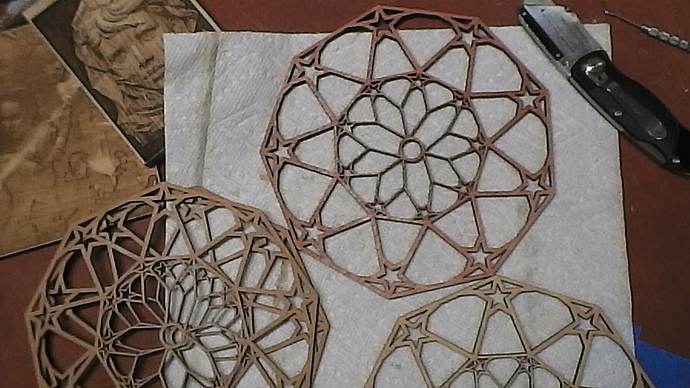 Chuckle! Nice trivets! (And yes, being a gal, I knew what they were.)

Best trivets ever! I do like my trivets to be in a Gothic style.

I would add some feathers and beads for dream catchers.

Funny! One of the first from-scratch things I made for the glowforge was this 8” diameter circular whatchamathingy. My girlfriend said, “Nice trivet! Is that the house warming gift for Rosa?” I’m thinking, I guess we could give away my prized whatchamathingy. “Why yes, but it needs feet.” I used some little rubber bumpers from Home Depot. 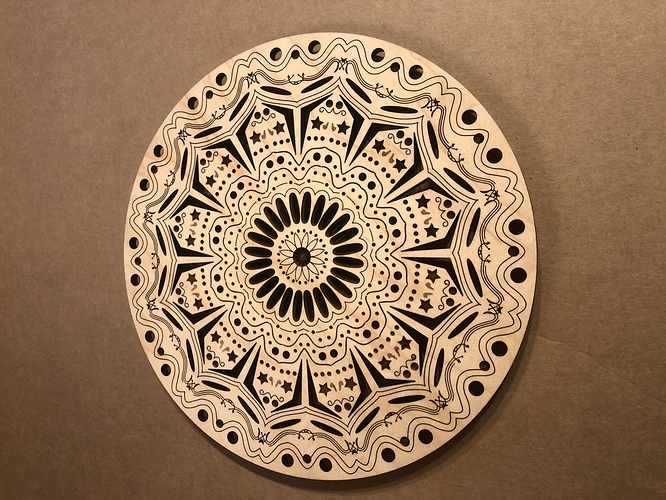 Yours looks like it took a lot less time to cut.

Lovely example of how “one man’s trash is another man’s trivet”… sorry, couldn’t resist.

Yep! That’s another cool whatchamathingy! (Actually, the first design of my own that I cut on the PRU was a whatchamathingy too. Mine wound up warping like a snake in the humidity down here - I need to recut it in thicker wood - all we had available to us was the thin stuff.)

Very nice! You are very kind to share. Thank you!

Final to this saga.
It seems the wife had an entirely different approach in mind. She has a large cork trivet she wanted to cover.
So we will now call this a Trivet Guard.

Plan A or B. Both work.
A: Cut Two draftboard Trivet Guards and glue them together.
3D engrave the footers, and also mount with glue.

OR B: Drop one plywood Trivet Guard on your cork trivet. 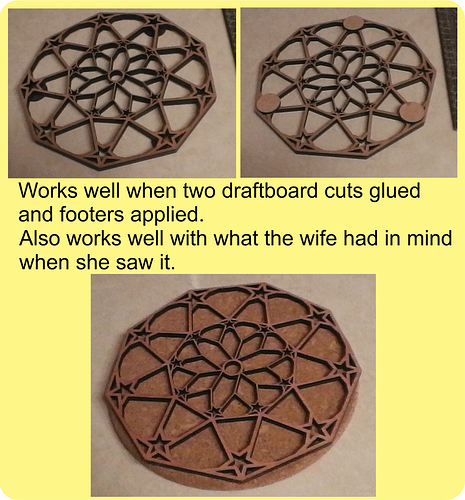 No idea of the long term response from this draftboard, but that is a problem with wood here in Florida. Thick or thin.

I also know that even the 1/4 will warp if a lot of alcohol is applied. Soon as I use alcohol to finish cleaning an engrave, I have learned it is best to spray the reverse side and then lay it flat under a weight for an hour or so to prevent curling up.

With my plywood and this draftboard, I am cutting to the chase and all large designs are being sealed as soon as possible with paint, poly, or lacquer.

Seems to be working since I do not have a lot of curly looking wood things laying about.

Yeah, I do not want to have to seal everything, it’s one of the reasons I like the Proofgrade. For things like boxes, it’s fine because the glue holds everything stable.

But flat pieces with a lot of cutouts in them…forget about it.

There’s a joke in my house where my mother-in-law, whom I call EMIL will just look at me periodically and say ‘Trivet, James, Trivet!’ (The E is because I add the word evil to the title—and, yes, she finds it funny)

After getting married and buying our first house, at the first Thanksgiving that we hosted—and before I got into cooking, so I had no clue—EMIL was looking for something to put a hot plate on, and she asked me for a trivet. I looked at her like a deer in headlights, because I had no idea what she was talking about.

In her frustration at not getting a response from me, she just kept repeating louder and louder that she needed a trivet, until I had to ask her if she was having a epileptic fit because I didn’t realize she was speaking english.

Fourteen years later, it’s still a source of amusement for her that I didn’t know that a trivet was a thing.

On a side note, I share strange thoughts with this community.

But very amusing ones!

So we will now call this a Trivet Guard.