Trouble with a downloaded file

I downloaded a file from thingiverse but the GFUI won’t open it. Can anyone help me figure this out?
Here is the link to the file 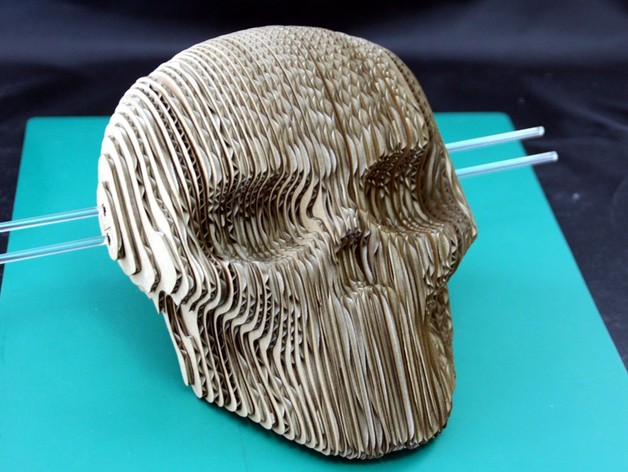 What format is the file?

Hmm, ok, so “the GFUI won’t open it”. Can you be a little more detailed? like what’s happening?

Did you do anything to the file? Is the license such that you can repost the file you’re working with here?

If you provide the file, and I (or someone else) can successfully upload it, it might indicate that it’s your browser somehow.

I tried to upload it too and had to break it into three separate files. Chances are it just too much or too complex for the UI to upload i one file…

I try to open the original file with no edits and the system times out giving me a message that there was an error with no specific reason as to what it may be.

I will try that next. Thank you.

Main problem I see with it is that there are actually 10 full sheets of designs on one file.

When you open it in Illustrator or Inkscape, you’ll see this: 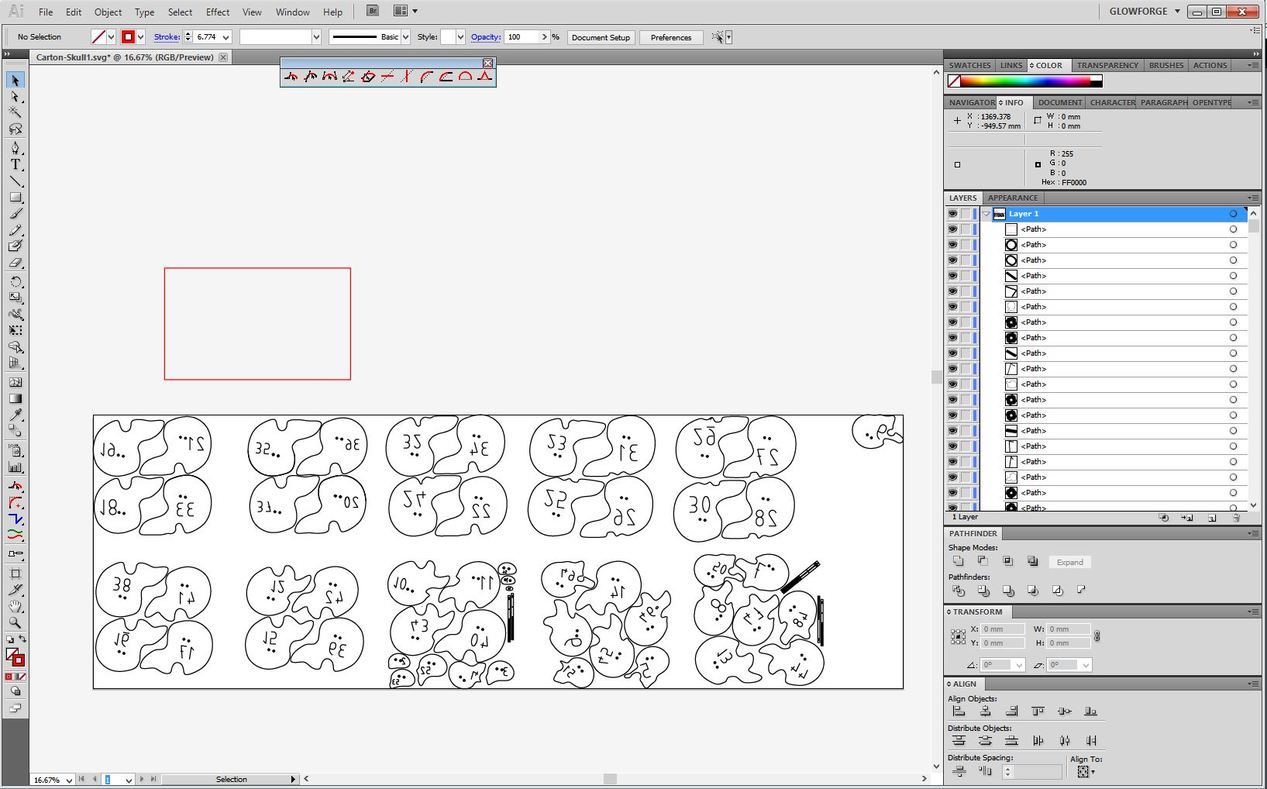 So the first thing you’l need to do with it is break it up into ten different files that will fit on the bed of the machine…looks like it’s kind of grouped together though to make that a bit easier…the groupings might fit on our bed. (But since it wasn’t designed for this machine you might have to rearrange them.)

Second thing is the number of nodes…if you zoom in to see the way that file was created, it’s loaded with a lot more nodes than it needs…if you can simplify the number of nodes, that would be great…but if not, you should be okay if you break it up into separate files.

Might be hard to see, but all of those little blue dots are nodes…definitely many more than is needed to maintain that shape. It’s going to really char when it cuts. 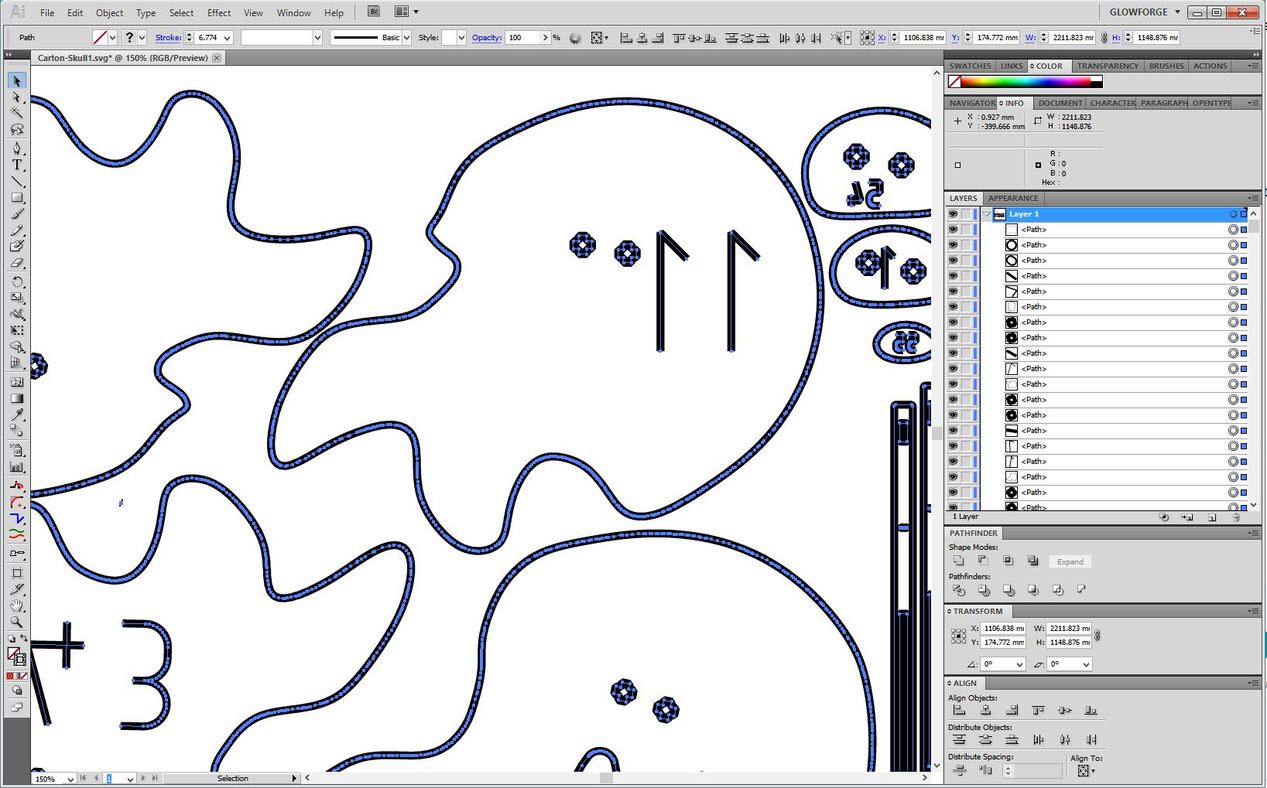 Last thing…the text is going to burn right through just like everything else - it’s all the same color. You’ll need to change the text to a different color anyway.

Quick clarification… Number of nodes by themselves won’t necessarily lead to overburn. It depends on how the path is formed, are the nodes joined, is the curve smooth, etc. Lots of jaggy little curves (as in with a not-smooth path) or starts and stops (as with broken paths) will lead to overburn. If your curve is smooth and the path is unbroken, you should be fine… but…

What number of nodes definitely do is complicate things for the UI, preventing a clean or fast load. Ideally the paths would have far fewer nodes just for simplicity. Using simplify can make this happen, but you might lose some detail. Caveat emptor.

Thank you for the tips. I will do that. Also i noticed that if i converted the object to path in inkscape the number of nodes was far less.

From the testing I’ve done…the laser moves from node to node and pauses for a fraction of a millisecond at each one, especially if it has a change of direction - if you have a bajillion of them - it moves with a jagged pattern, and for that many nodes, it’s going to pause longer, and burn more in the same place. It doesn’t take much to burn a bigger hole with this thing, so the cleaner you can make the paths going in, the better cut you’re going to get. (Bezier curves versus short segments…and that thing is loaded with short segments.)

Anyway, corrugated cardboard isn’t a good candidate for that many nodes. I’d try to knock them way back before cutting the file. It might be possible to do it, but it’s going to be really flamey I’m afraid.

The caveat is that simplify makes guesses. If accuracy is paramount, you might not like what the simplify action does to the path. Inspect carefully where tolerances matter.

I have used it before and with my old feeble mind didn’t even think until you mentioned it. I haven’t had a issue yet with accuracy all comes out as designed but then again what I design is pretty simple. My customers like simple…

It’s usually where you have interlocking pieces that this would cause a problem. Slots and tabs are usually really precisely sized to ensure a snug fit.

The point that both of you gentlemen are making is an excellent one…we need to analyze each file and situation individually and think about how to proceed with it…because this isn’t a one-size-fits-all kind of machine. Use plywood…might not be such a big deal. Use cardboard…might need to be a little more careful to clean up files that we download from the internet.

And everyone needs to remember that anything we get from the internet wasn’t designed for use in this machine, so it probably needs looking at before you try to cut it.